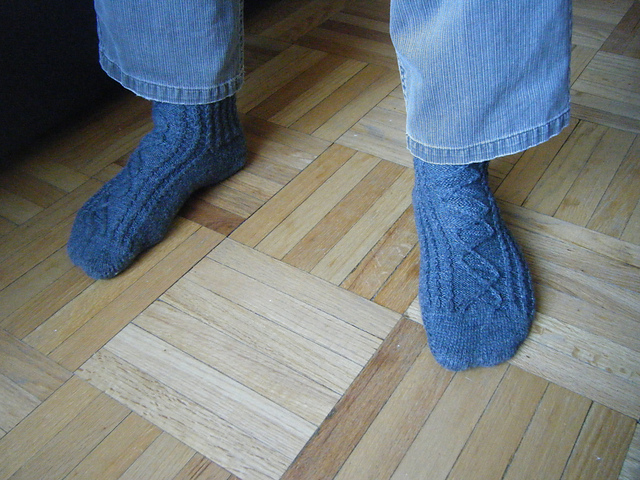 Ever since I showed him June Oshiro's DNA cable scarf pattern, the boyfriend has wanted me to make him a pair of DNA socks (since he doesn't really wear scarves). It took me a while to get around to it, but I started the first one during the X-mas holidays and managed to finish at the beginning of last month. The wait was totally worth it, apparently, because he wears them regularly (which is more than I can say for some of the things I've knit for him... sigh). 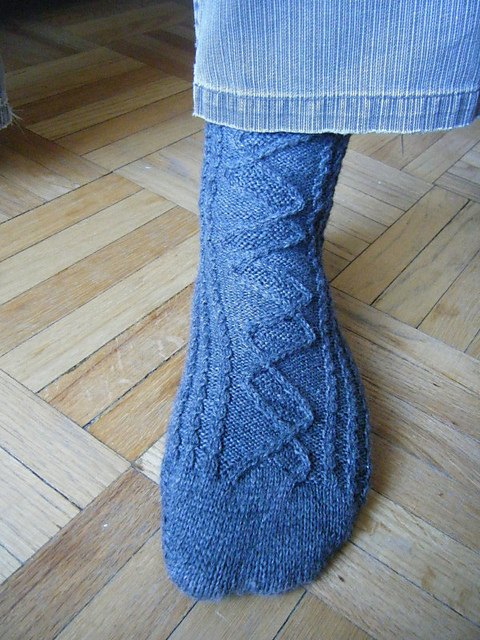 I decided to go the toe-up route because I'd already tried it with those X-mas socks, and as I said then, I'm not going back to top-downers. I cast on 40 stitches (for a total circumference of 80 stitches), so that the central cable would take up one quarter of the total stitches, and so I'd have an even number to do 2x2 ribbing with mock cables on each side. I even made the second sock have the mirror image of the cable pattern so that they would be symmetric. When I got passed the heel, I continued the mock cable pattern all the way around the leg, but I had to finagle something in the back of the sock, with a 2x2 cable and an increase of two purl stitches, because it was no longer symmetric. I finished off with a 1x1 rib and Jeny's Surprisingly Stretchy Bind-off, which worked great. The yarn is something called bbbperCALZE, which I picked up at the Creativ Festival in October and deemed manly enough for boyfriend socks. 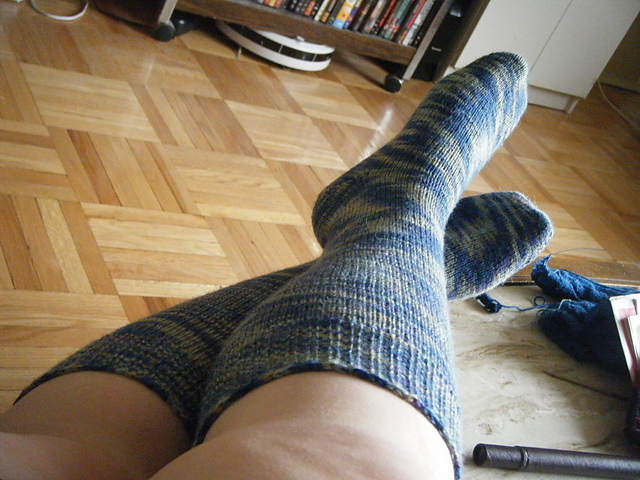 The socks I most recently knit for myself were infinitely simpler. I more or less followed the Knee Socks! pattern by Diana Parrington, with a short row toe and heel. I did the calf increases as indicated, and finished off with the super-stretchy bind-off again. Being simple stockinette, I was able to get passed the heel turn in the first day (mind you, I was sitting through talks at a conference all day), and the rest of it came together in about 12 days. 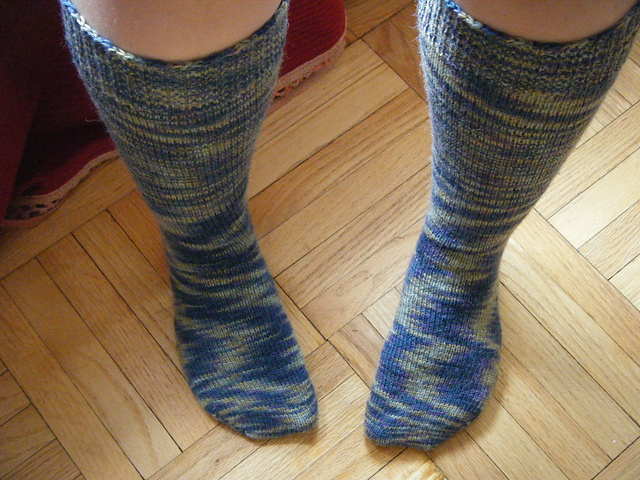 The yarn is a couple of skeins of Diamond Yarn Luxury Collection Fancy Free that I managed to pick up in the bargain basement of Romni Wools for cheap. It's a merino-alpaca-nylon blend that is just so soft and wonderful... and the colours are pretty awesome too. I love how the calf increases caused the yarn to pool differently along the leg of the socks. I'm calling them my Lightning Socks because of the yellowish pooling pattern on the blue and because of how little time they took. These are definitely my favourite socks right now, and I'm itching to make myself another pair!
Posted by Unknown on 3/21/2011 04:06:00 PM