This Thankgiving (yes, I'm two weeks late... shaddup), the boyfriend and a friend of ours decided to cook a turducken, that is, a chicken stuffed inside a duck stuffed inside a turkey, all of which have been de-boned and stuffed. Apparently, it took an experienced butcher two hours to prepare, so we weren't about to make our own from scratch. The cooking and eating were supposed to happen at the friend's house, but he came down with strep throat, so it ended up being at our place. We picked up the bird combo from his place at midnight after an evening of drunken debauchery, and started cooking the sucker as soon as we got home. 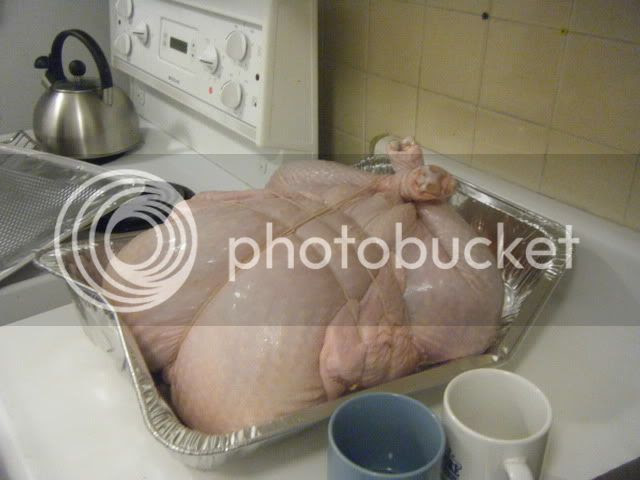 Weighing in at a mighty 25.8 lbs (recall: no bones, therefore, all meat!), this was one big bird. After rubbing it with some creole spices, the boyfriend shoved and squeezed it into the oven where it would begin its 13-hour baking adventure. I went to bed (around 2:30 am) with the smell of turducken wafting through the air, and I woke up to the same smell. Kind of awesome. 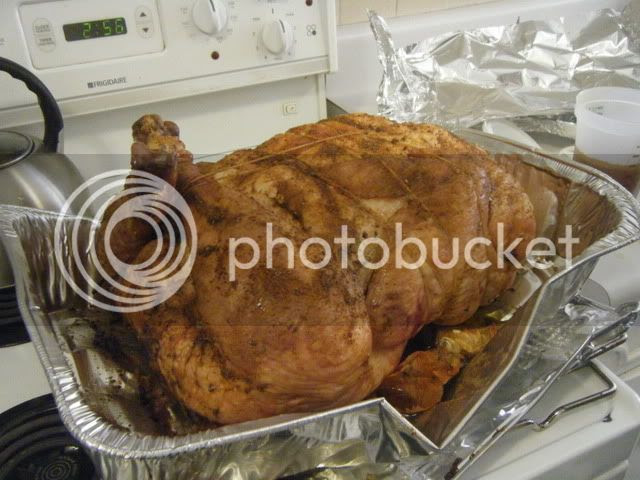 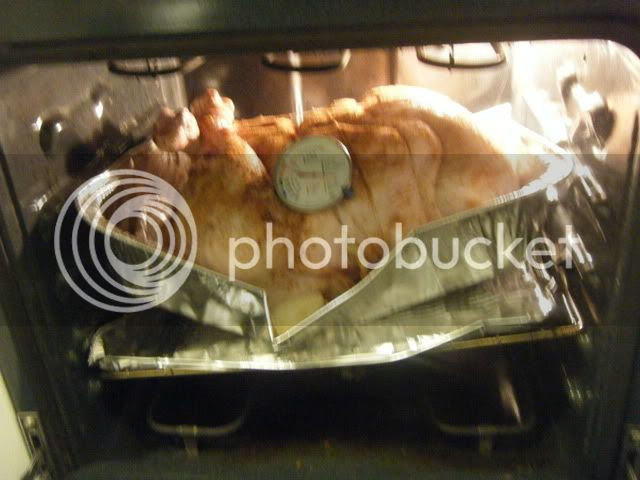 By late afternoon the next day, the beast was ready to be eaten and eaten it was. The drumsticks came off the body like butter, and the whole thing was tender and juicy and delicious. One of the stuffings was bacon-herb, so we were in fact eating four animals at once! 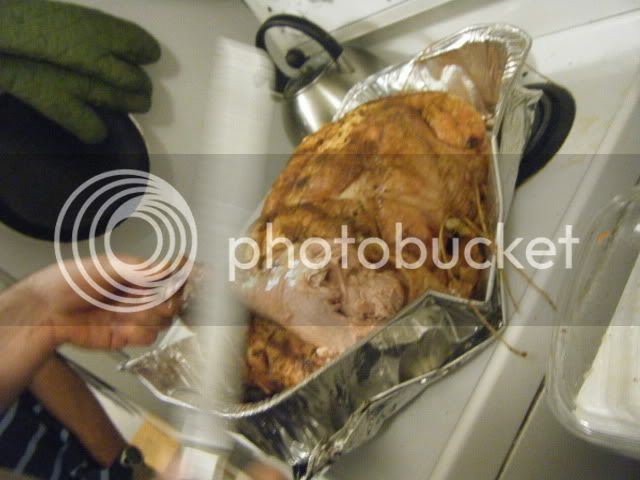 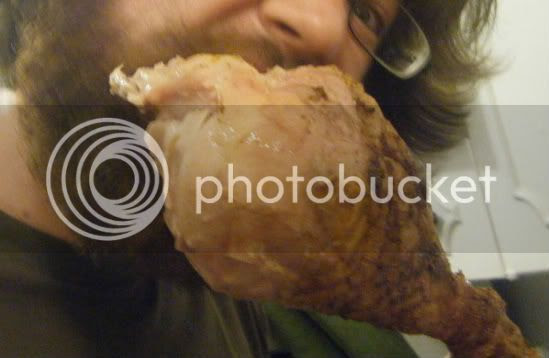 Here is the ruined beast... even after feeding a dozen people and giving pieces of it to our guests, we still had a quarter of the birds leftover. 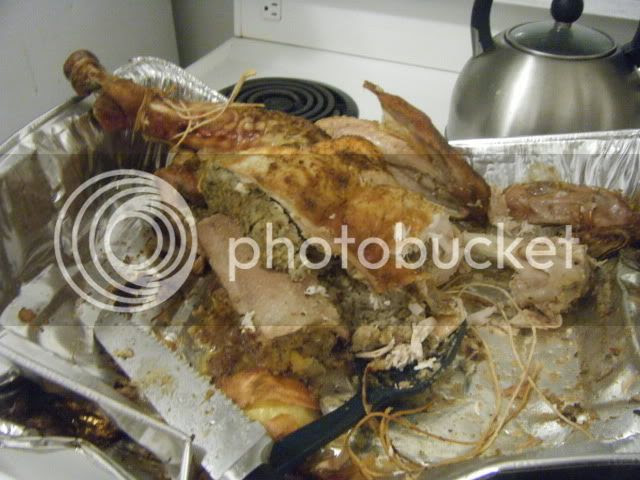 It just barely fit in our largest mixing bowl, and lasted us many meals. This is something that we won't do for a while (turns out turduckens are expensive), but it was definitely worth the experience!
Posted by Unknown on 10/29/2009 09:56:00 AM 0 comments

Yesterday, I went to the Creativ Festival. (Yes, a timely post. Who'd a thunk it?) It was really fabulous and totally worth the trip downtown. I would have taken pictures of the whole thing, but it was strictly prohibited to bring cameras onto the convention floor. That didn't stop some people though, and I was slightly annoyed by that. Anyway, here's proof I was there: 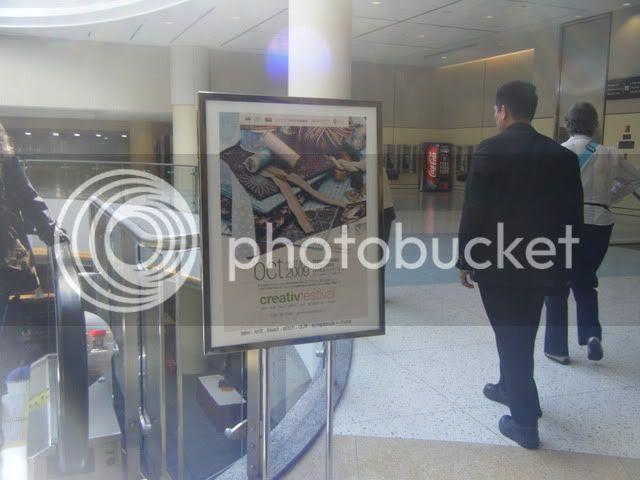 I think my favourite thing at the festival, even before the yarns, was the quilting. The centerpiece of the whole festival was the Quilt of Belonging. It is a 120 foot-long quilt with 263 hexagonal blocks from different nations around the world, including a lot of native american tribes. It was quite impressive, to say the least. Some of the blocks are incredibly ornate, and the one I was most impressed with was the one from France, which was created using petit-point, a diagonal embroidery stitch, at 1600 stitches per inch. It took a year to make.

There were also some really nice Mennonite quilts hosted by Len's Mill Stores, some of which went way beyond being crafts, to full out art. There was a really nice one that used different blocks of patterned fabric to create shading in the background of a floral still life, which was really amazing. I really wish I could have taken pictures of those. Another favourite was the quilts by Designs by Shiromie (unfortunately, I could only find her Etsy page, which only has one quilt). She used sari silk and beautiful stitching to create these amazingly complex and luxurious quilts, and it's too bad she only had a little tiny booth. The quilts by Lenore Crawford were pretty fabulous as well. We also got to play with some quilting machines (looks something like this), and that was super fun. We could sew designs into a quilt with this lazer-guided machine, and it was super smooth and awesome.

I definitely got my fill of beautiful yarns as well. Some of my favourite yarn stores had booths, including the Purple Purl and Romni Wools, and there were tons of yarn stores I'd never heard of before. I actually showed amazing restraint and only bought one skein of yarn and a little bit of fluff for spinning. Here they are: 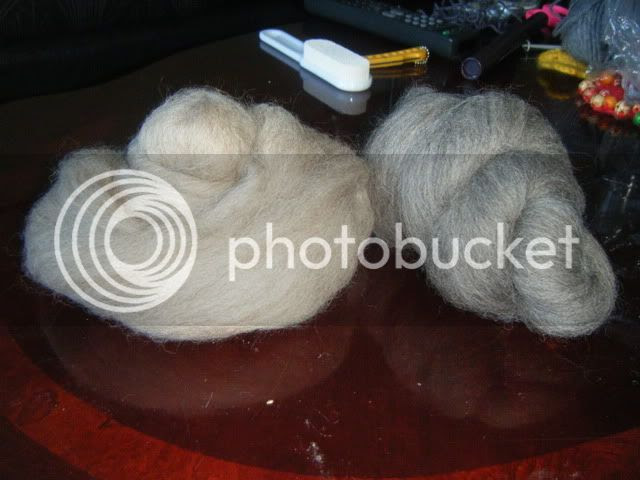 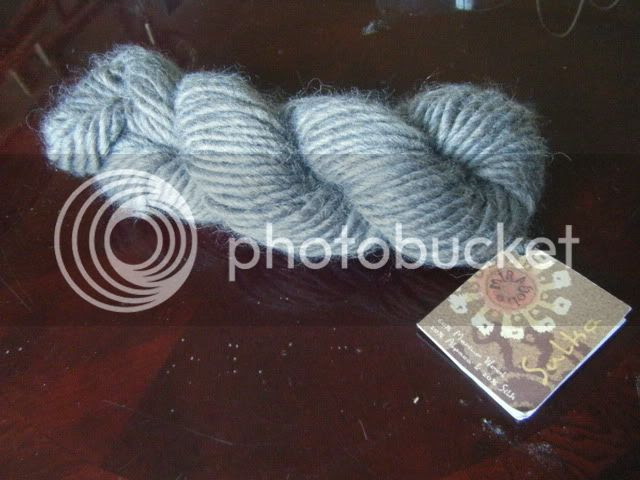 The fluff is a little bit of pure wool I got from British Yarn, hosts of the UK knit camp. They gave me a nice Ravelry pin as well. The skein of yarn is some Mirasol Sulka, which is a 60% merino, 20% alpaca and 20% silk blend, and it's a single-ply bulky yarn. It's quite possibly the softest thing I've ever touched, save maybe a kitten. It's actually a little browner than in the picture. I got it at the Spinning Wheel Alpacas booth, where they had an alpaca named Ozzy on display. He was super cute and friendly.

Because I couldn't take pictures inside the Creativ Festival, I took a few inside the Convention Centre. Here's a giant woodpecker: And a classy-looking moose: 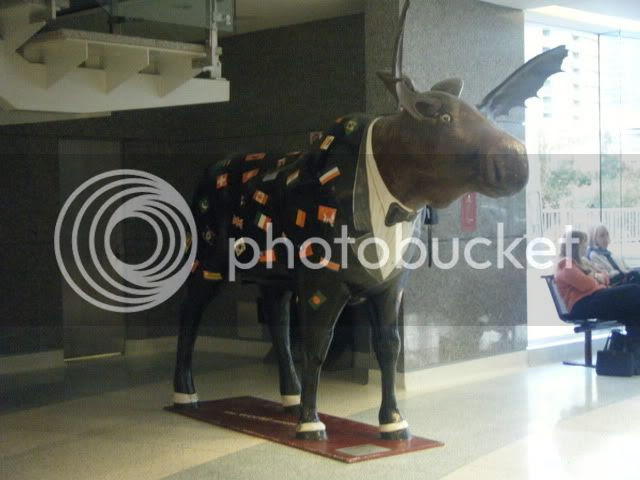 And some fancy floor mosaics: 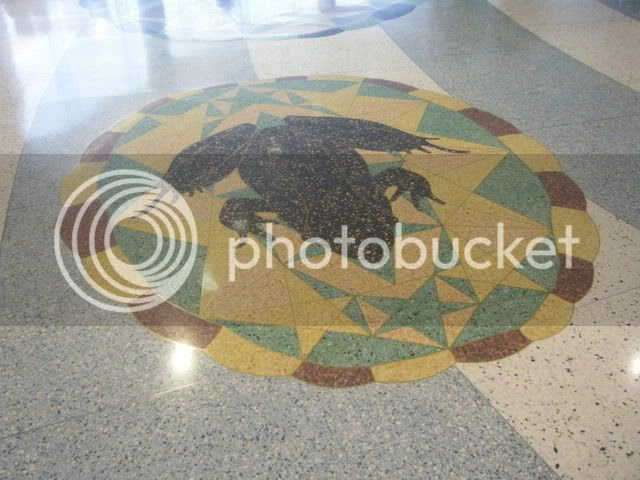 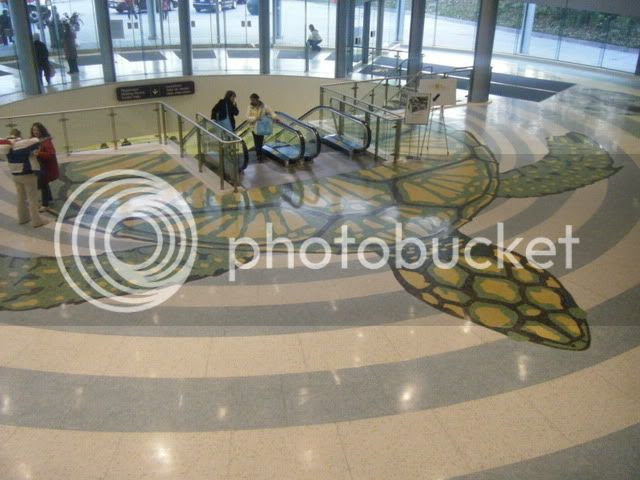 Sean Carroll over on Cosmic Variance posted a video of Lloyd Knox playing the "Dark Energy Song" a few days ago. If you don't feel like clicking on the link, I'll show it again here:

The lyrics can be found here. Prof. Knox apparently uses this song to illustrate the concept of dark energy to his astronomy class. In fact, that was one of his students who filmed it and put it up on the Tube. For those of you who don't immerse themselves in astronomy every day, all day, dark energy is a device used to explain the apparent acceleration in the expansion of the universe. It accounts for approximately 70% of the mass-energy in the universe, but no one actually knows what it is.

I think Prof. Knox's song is great (I would even go so far as to say it's AWESOME!!!), but I have problems with dark energy. I mean, there is still a problem in that we don't know what it is. The leading theory is that it is a cosmological constant (otherwise known as Einstein's greatest blunder, but that's a story for another day), that is, it is a constant energy density that permeates the vacuum of space. The main problem with this is that the estimated value of the energy density of the vacuum as determined by cosmologist is 10^120 times smaller than the value as determined by particle physicists... and that's a BIG difference.

My main beef with it, however, is more philosophical. It seems to me that adding an invisible and undetectable energy in order to explain the acceleration of the universe's expansion to be a little silly. Sure it explains the results ok, but so did epicycles in terms of planetary retrograde motion. It seems to me that a better explanation would be an alternate theory of gravity. A more recent Cosmic Variance post talks about preliminary evidence that Einstein's theory of general relativity doesn't work to explain large scale clustering. Of course, there aren't yet any alternate theories of gravity that explain the universe any better than general relativity, but that doesn't mean that there won't be.

I guess the point of all this is that we don't know everything about the universe, and in my opinion, if observations don't fit the theory, the theory needs revising. Don't get me wrong... I love general relativity because of its elegance, but I think there are still serious problems with our way of using it to explain phenomena in the universe.
Posted by Unknown on 10/09/2009 02:31:00 PM 1 comments

Am I a yarn snob?

I have no problems with acrylic yarn. It's easy to wash, it's often just as soft as the natural fibers it's supposed to imitate, and it's much cheaper. James C. Brett's Marble Chunky is one of my favourite yarns. It's so soft and the colours are super fancy. I never really understood why people got all snuffy about using acrylic in their knitting projects, claiming it was stiff and squeaky... until recently.

I'm using an acrylic yarn, Paton's Astra, to make one of the numerous Christmas presents I'm planning to knit. It's a nice DK weight, it's reasonably soft and it comes in a lot of pretty colours (not just baby colours or whatever). However, I've noticed that when I knit with it, it squeaks! It's not terribly noticeable, and I wouldn't have noticed it if no one else had mentioned it, but now it's driving me crazy! I'm making other things with different yarns made of natural fibers, and of course, there's no squeaking... I feel like I've become a yarn snob! NOOOOOOOOO!!!!

Anyway, to cheer me up (and you too, dear reader... I know you feel my pain), I'll post a picture of my latest Knit Picks order. Yay! At least I can get natural fiber yarns at acrylic prices from that site... 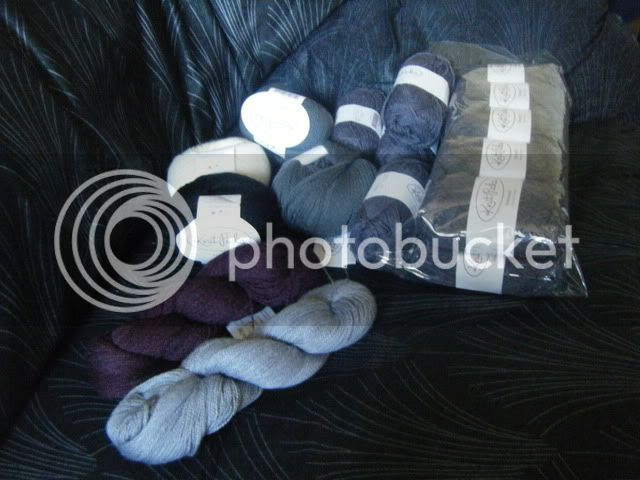 I've been putting off this post for a while because I knew it would be a doozy, but I've now finished all my NSERC and OGS scholarship applications, so I'm considerably less busy. I'm also almost over this cold which has been keeping me from doing much other than absolutely necessary work and sleeping. So, get prepared for a super long yarn! (har har...) Seriously, this post is going to have a LOT of pictures.

About three weeks ago, I attended a spinning class at the Purple Purl, taught by Amy Swenson. Amy is the author of "Not Your Mama's Crochet", which was the book I more or less learned to crochet from after learning the basics from my mom, so I was a little star-struck, but I didn't say anything to her about it...

Anyway, each of us received a little spinning kit, which included a drop-spindle and some fluff samples. She then taught us how to predraft our fiber, how to set up our spindle for spinning with a leader (a small piece of yarn which our unspun fluff could cling to), and finally how to get it all started with a simple flick of the wrist! We also learned Andean plying and how to set the twist (though I haven't actually tried that yet with any of my samples). We even got a little handout so we wouldn't forget what we'd learned. Here's my spindle 'cause it's perdy: 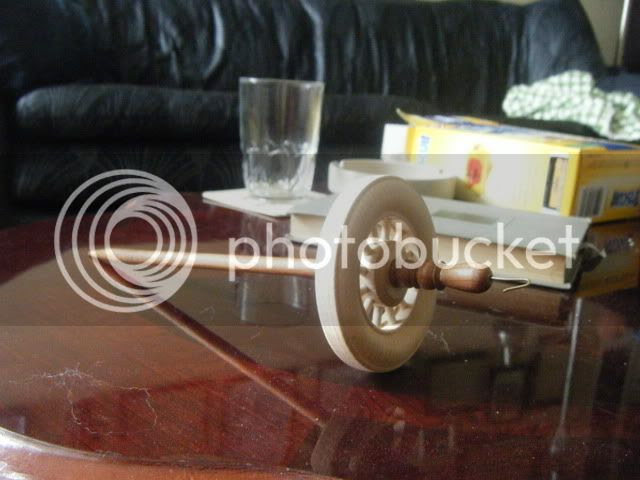 My first handspun, as would be expected, I suppose, looks pretty crazy. It's all thick and thin, and sometimes really poofy. We got to work with some really soft bluefaced leicester wool (I think), the first bit of which was undyed, and the second bit of which was dyed in the most beautiful blues and purples... Here are my first attempts at creating yarn! 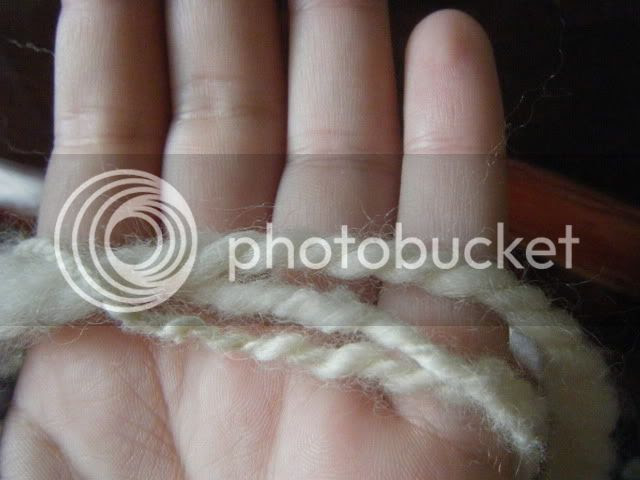 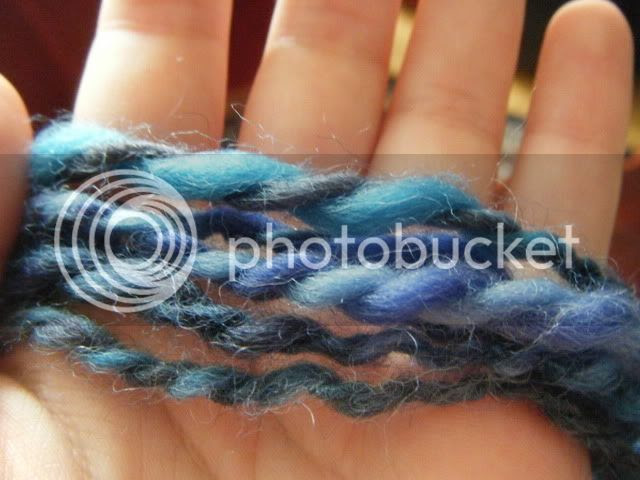 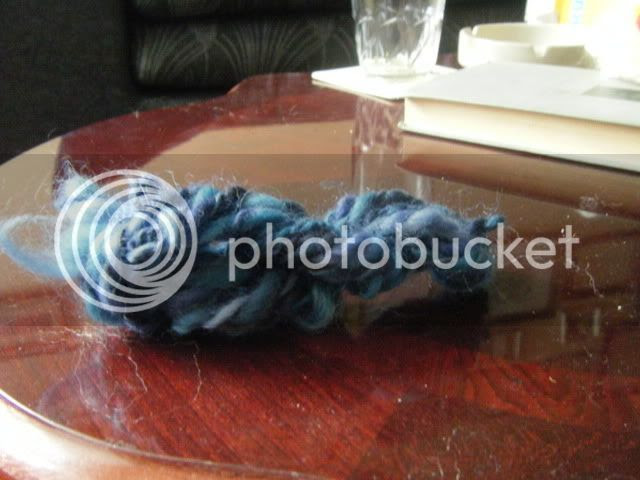 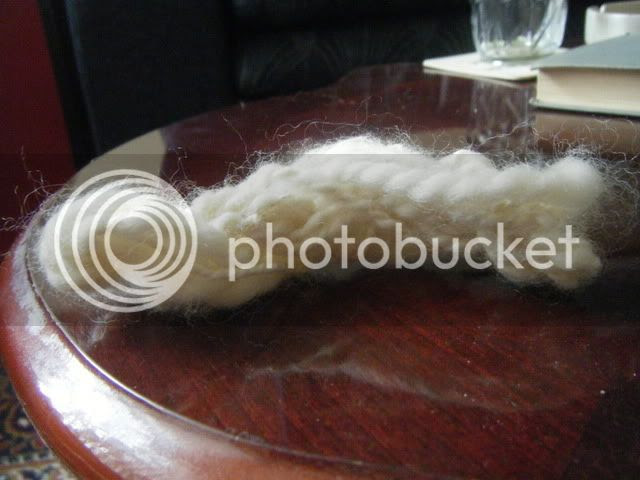 Pretty... erm... artsy looking, right? I don't think I'll ever be able to knit anything up with those, but it'll be nice to keep them around as my first little skeins of yarn. I've since been practicing a bit, and I think I've managed to get the yarn to be more even. Here's another sample I spun up more recently with more of that undyed BFL wool: 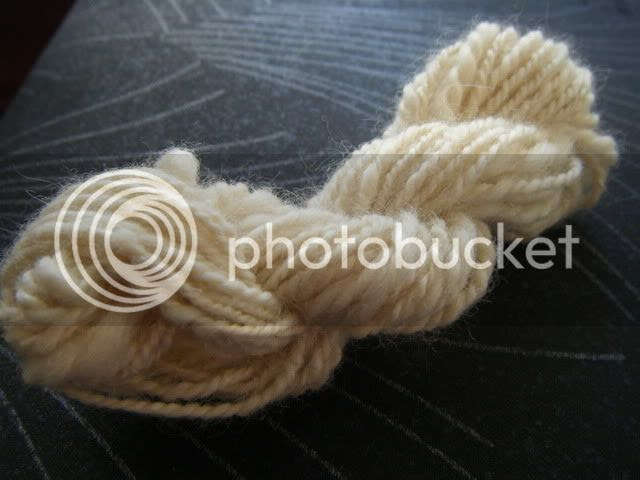 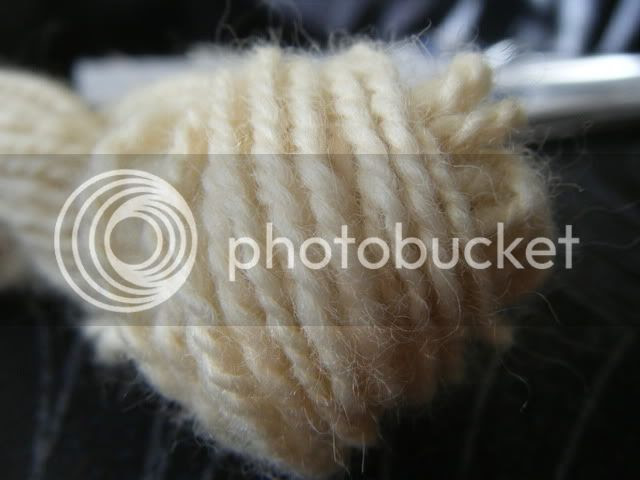 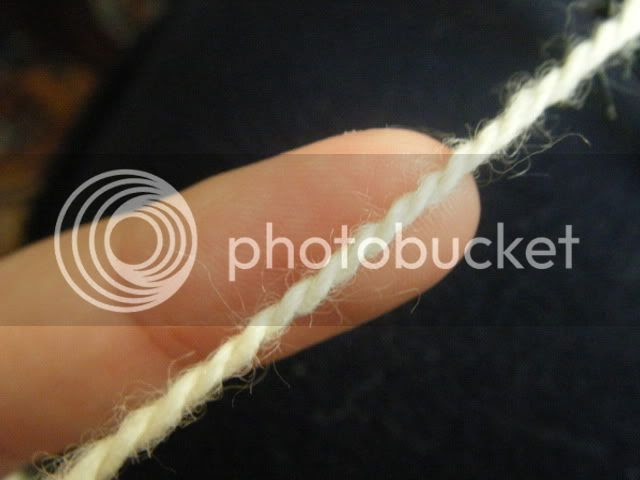 And now for some action shots! (Bored yet? There's still more. Just let me indulge myself a little.) Here's some of that unplyed yarn: 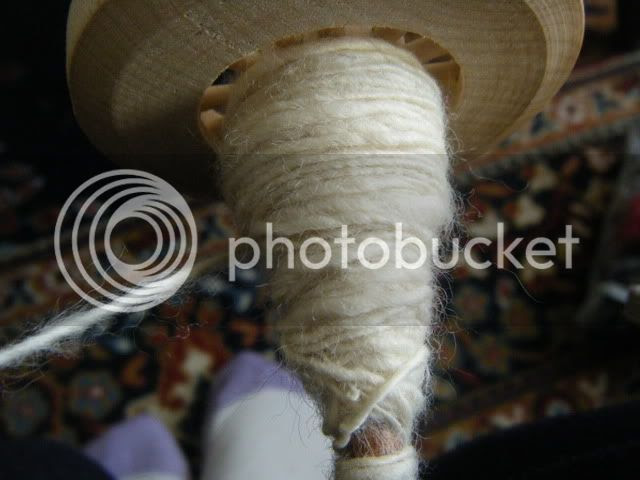 And getting set up for some Andean plying... this kind of hurts the hand after a while: 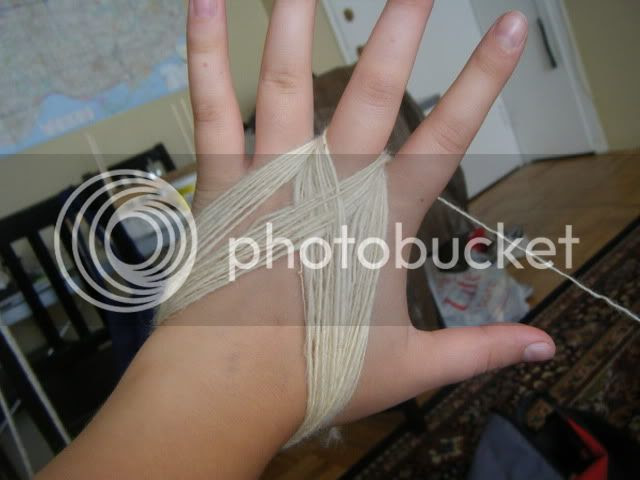 And the plyed yarn all on the spindle: 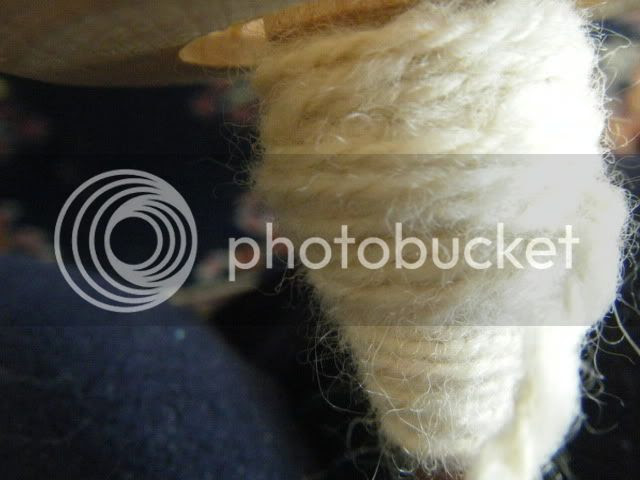 Finally, I managed to spin up one of the little samples in the kit. Here's a little bit of soy yarn in some delicious colours. It reminds me of cotton candy. Yummers! 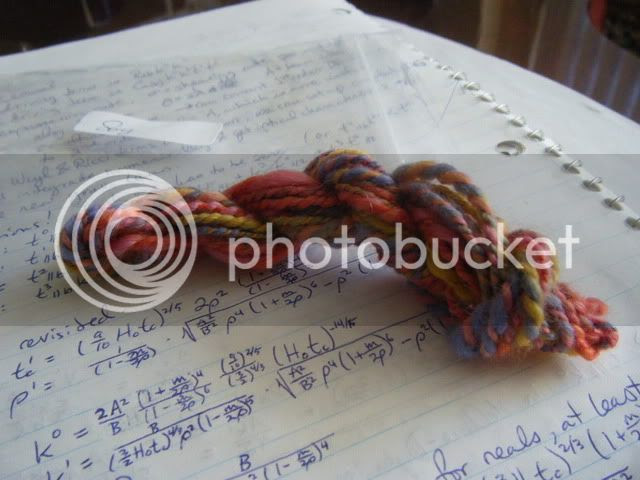 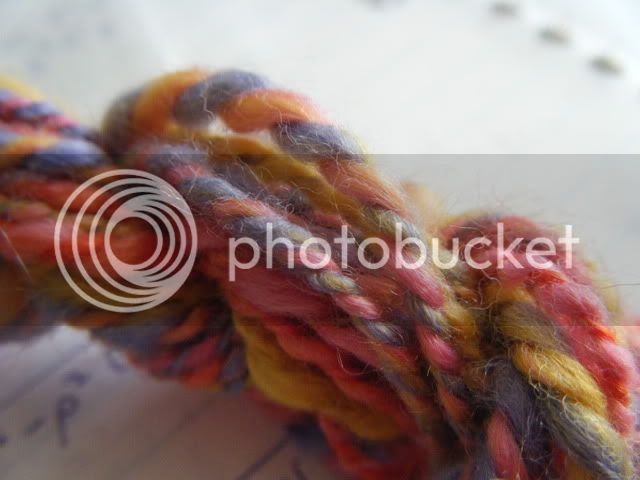