I mentioned last time that I overcame my fear of stranded colourwork with those Spidey Socks. Well, as part of my X-mas knitting, I also overcame my fear extremely fuzzy silk-mohair blends (à la Cracksilk Haze). For my mom, I knit Romi Hill's Ice Queen from Knitty. I didn't use Rowan's Kidsilk Haze, but a slightly cheaper similar yarn called Filatura Di Crosa Baby Kid Extra in a gorgeous silvery grey colour. 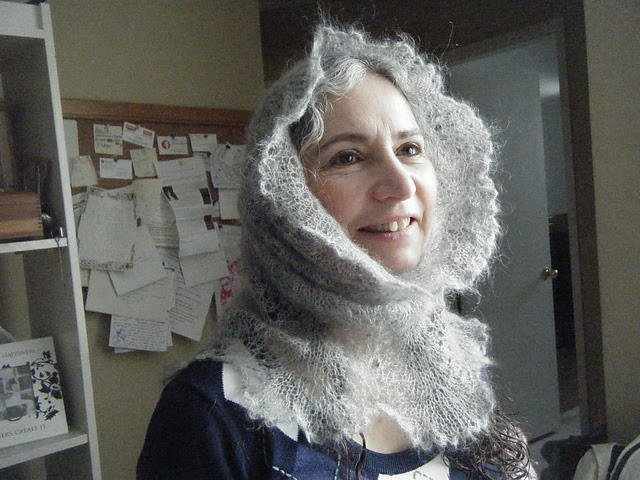 I love this pattern. It's so simple, just a feather and fan kind of design, but it works so well with this yarn. And fuzzy mohair blends are just made for knitting with sparkly little beads. I used some little shiny purple ones from my bead stash. It ended up stretching out a little more than I'd hoped for, but Mom still likes it, so it's ok. 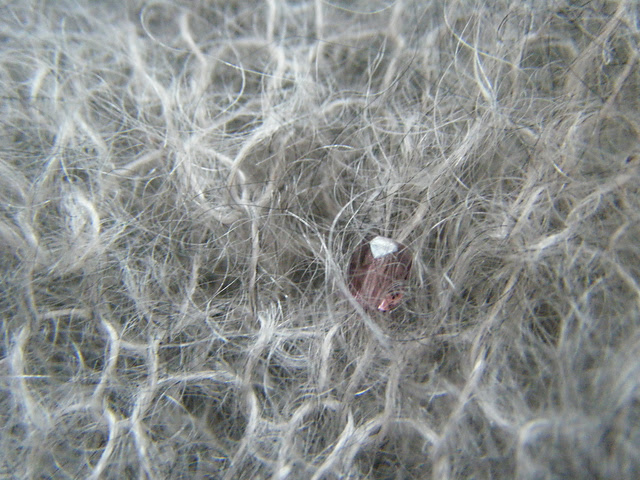 The beads I used for the Ice Queen, I also used for my second attempt at chainmail jewelry. I made Mom a nice necklace to match the earrings I made her last summer. 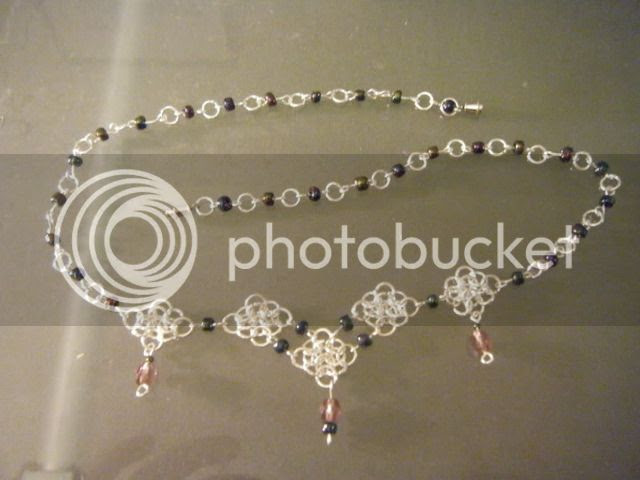 I used the basic rosette from the Chandelier earring pattern in the Anticraft book and then attached them together using these beaded wire thingies. I think the hardest part was making all the loops for the wires, since opening and closing jump rings is pretty easy after a while. 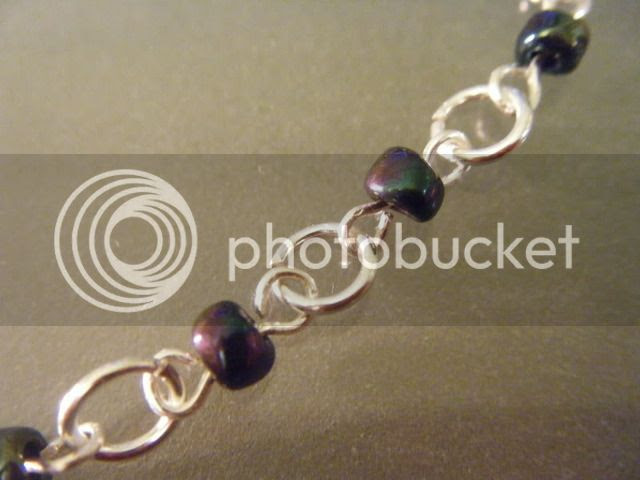 Finally, for my Dad, I made an iPod cozy... Yeah, it seems like I copped out a bit on that one. However, I also got him Sean Carroll's awesome new book, From Eternity to Here, which hopefully makes up for the lack of hand-made gifts. 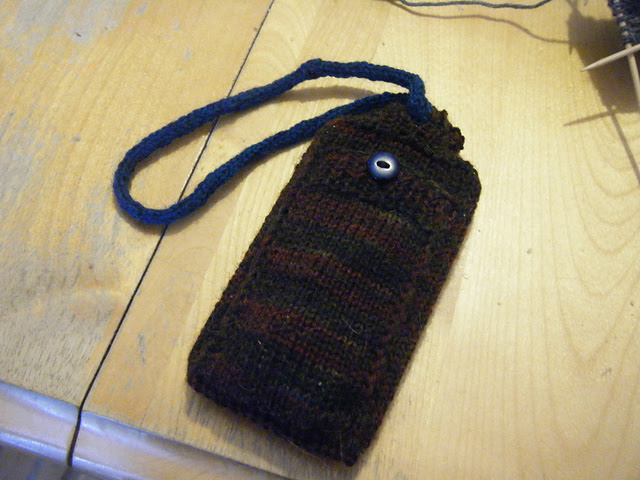 I used "The BEST iPhone cozy EVER" pattern by bethanye. It's really simple, but works perfectly. I love the little pocket, to which I added a little button for extra security. I also made it a drawstring pouch. I used the left-over yarn from Stevie's socks. 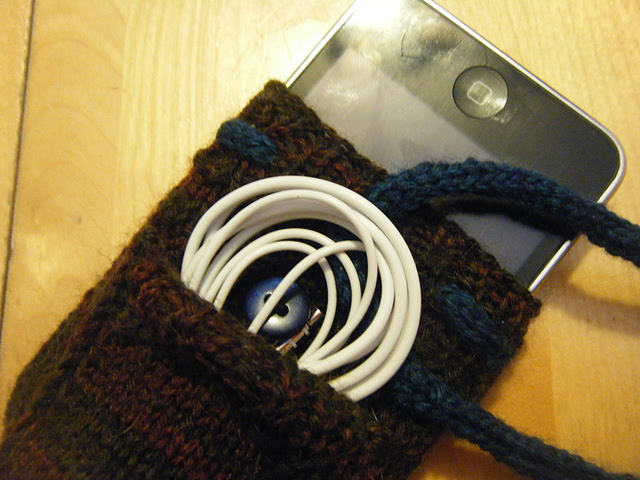 I've actually been doing a LOT of knitting recently, and making a slight dent in my stash, so the lack of posting hasn't been for want of things to write about... I've just been incredibly busy. Hopefully, over the next week or so, I'll be able to catch up on my most recent FOs!
Posted by Unknown on 2/26/2011 01:46:00 PM 3 comments

Yes, I know. It's February. I should have posted about what I knitted for everyone's Christmas/Brumalia/Newtonmas presents at least a month ago... Well, better late than never, right? Right?

I'd like to start off with socks. I like socks. A lot. They're pretty much the perfect project. Simple enough to work on while watching TV or sitting through a lecture, yet small enough to be portable, and with that heel-turning in the middle they have just enough of a challenge to keep me interested. And after inheriting a drawer-full of hand-knit socks from my grandmother, I know the awesome squishy comfortableness of wearing them.

This X-mas, I tried my first toe-up socks and ohmygod I'm so not turning back. I love the short-row toe because I always manage to do my Kitchener stitch too tight. And of course, you can try it on as you go, and knit until you run out of yarn. I also tackled my life-long (ok, maybe a few months-long) fear of doing serious stranded colourwork. I'm still not a fan, but at least I can say I tried it. 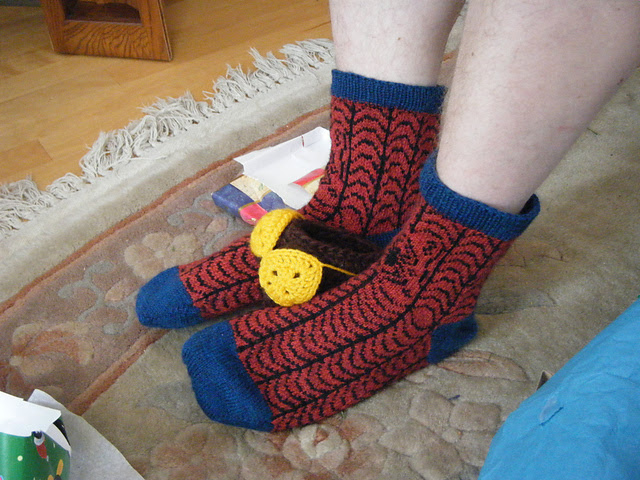 Sing it with me! Spidey Socks! Spidey Socks! Friendly neighbourhood Spidey Socks! These are totally the coolest thing ever, by the way. The pattern is Even Big Guys Love Spidey Socks by Terri Frid (Ravelry link) and I made it for my brother. It was quite a challenge for me because I wanted to make sure the floats wouldn't catch on bro's toes, so I ended up twisting the yarns together every two or three stitches. It's a work of art, I tell ya... I wish I'd taken a picture of the insides. 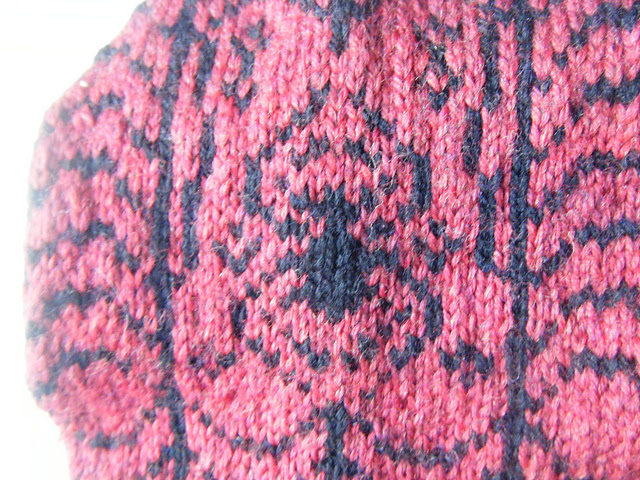 Also, then ended up being a little long in the foot for the bro, mostly because I took his shoe size and based the sock size on that without actually measuring his foot. Well, I'll know for next time and he said he'd wear them anyway. And hey, they might shrink a bit in the wash! Then again, the yarn I used is mostly Knit Picks Stroll, which is superwash merino, and likely won't shrink... sigh...

So you're probably wondering what that thing between bro's Spidey Sock-clad feet is. Well, I'll diverge a little from the sock topic to tell you that it's just the most awesome beer cozy ever! It's the Booby Coozy by Keesha Arthur. I made mine an ebony-skinned Amazonian, not only because that was the only yarn colour I happened to have on hand, but because I thought it would look cool against the yellow bikini. 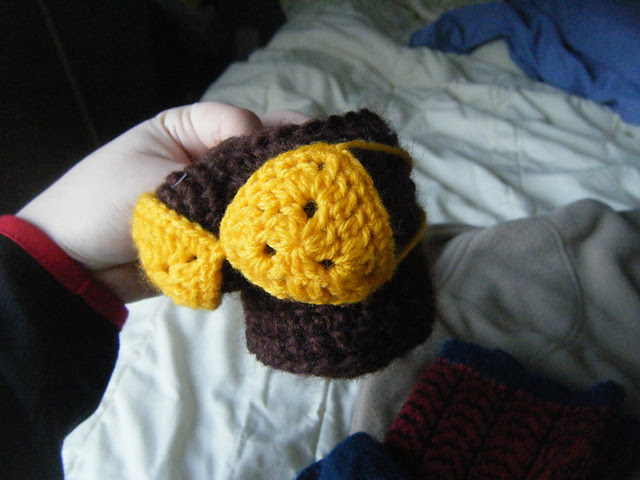 Warning! The following image is not work-appropriate! Teeheehee! 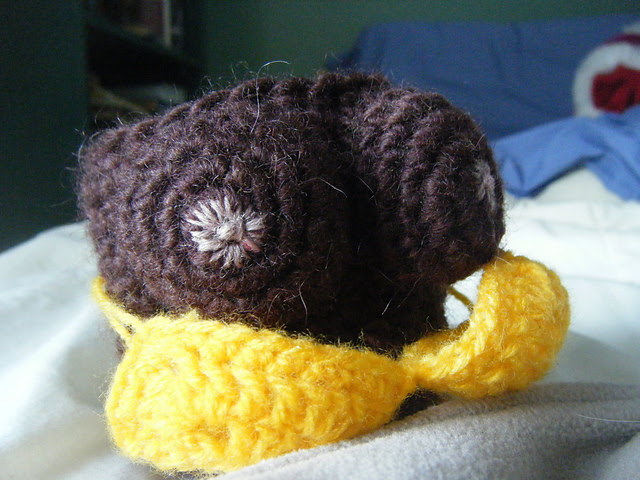 Ok, back to socks.

For my friend Stevie, I also made a pair of toe-up socks and didn't ask for his proper foot measurements and made socks that were way too big. Ah well, he promised to wear them as well. I made them from a lot of left-over yarns I had lying around. I used the left-over Stroll from the Spidey Socks for the blue, and an unknown gift yarn for the brown, and then some leftover red from my Monkey Socks and green from a new ball of S.R. Kertzer On Your Toes. 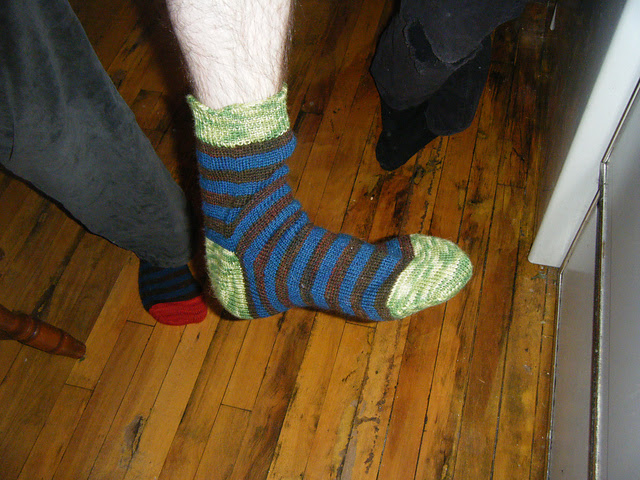 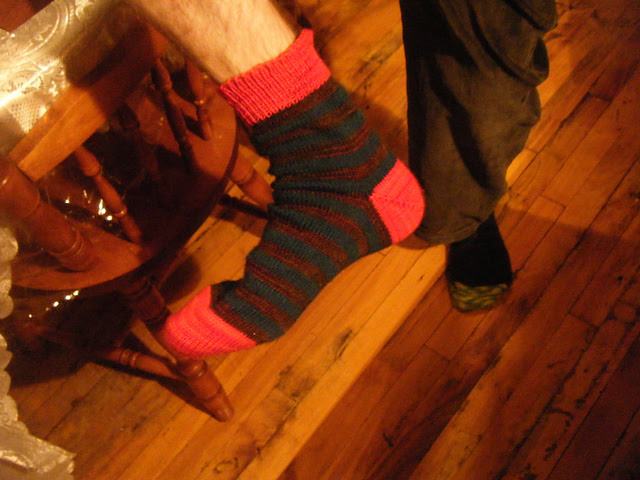 I'm a little late on the uptake here, since Joanna actually relaunched the Happy Seamstress a couple of weeks ago, but I've been busy writing my first first-authored paper, so cut me some slack. Anyway, the Happy Seamstress site looks amazing. My favourite part of the site redesign is actually the pink bubble with the site logo... there's just something about that bright pink colour...

The site currently has some sewing patterns and one knitting pattern, some beautiful lace opera gloves (seen left), but more will be there soon. She already a few great free tutorials worth checking out.

Also worth checking out is our Stitch 'n Bitch contest! Following my review of the latest SnB book, Knitting Superstar, the publisher agreed to send out free copies to winners. The idea is to submit a photo and description of a project you've made from one of the SnB books, or a project that was inspired by these books. It doesn't have to be a project made recently or anything, but it does have to be your own work. If you knit or crochet and have ever used any of the SnB books, you should definitely have a look at the contest page! 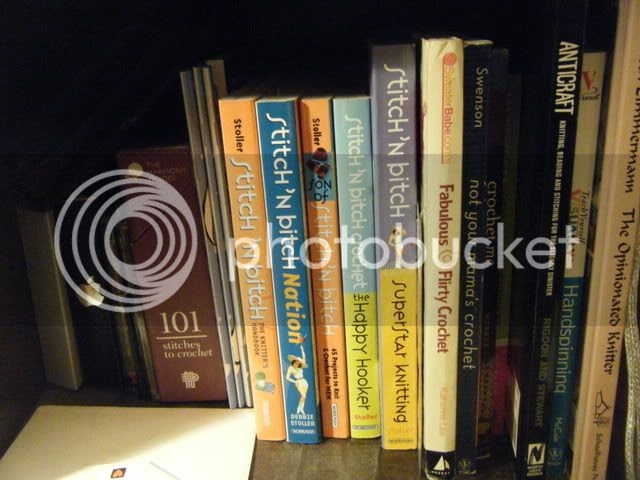