I feel like the enlightened master of yarn and pointy sticks. Call me the Knitting Yoda. (By the way, I just did an image search for a picture of Yoda knitting... none to be found. I will have to change this.) The reason I feel this way is because last night, I gave my first real knitting lesson.

The girlfriend of one of my colleagues, whom I shall call S, expressed an interest in learning how to knit after seeing my beautiful cabled sweater, and last night, we got together for an informal dinner and a knitting lesson. I found out that the real reason she wanted to learn was because my colleague has a really nice hand-knit scarf from an ex-girlfriend, and S wants to knit him one to replace it and/or so she can steal the old one.

Anyway, S was a very quick learner. She had bought some straight aluminium needles and some gorgeous red Manos Del Uruguay Maxima. I first taught her how to hold the needles and make a slip knot, and then how to do the knitted cast-on. This is a trick I learned from Kelley Petkun (of Knit Picks fame) and it's particularly effective because the motions of the cast-on are the same as actual knitting.

I then showed her the basic knit stitch, and when she had done a few rows of that, I showed her how to purl, and then how to bind off. I also showed her the long-tail cast-on, just because I like the look of it better than the knitted cast-on, and if she's going to be knitting a gorgeous scarf for her boyfriend, it aught to look as professional as possible.

It was particularly helpful that S is German, and so learned to knit as a child in school using the Continental style, which is the one I use. I don't particularly have anything against the English style and I'm able to do it, if necessary, but I'm not very good at it. Anyway, it was nice to be able to share knitting theory with S, a lot of which I learned from Debbie Stoller's Stitch 'n Bitch, without having to think about how I was making the stitches myself.

I'm certain that she'll be well on her way to making her boyfriend a wonderful scarf before long, and I'm definitely looking forward to our next knitting lesson.
Posted by Unknown on 10/14/2010 11:05:00 AM 1 comments

For as long as I can remember, my mom has always grown her own basil to make pesto. 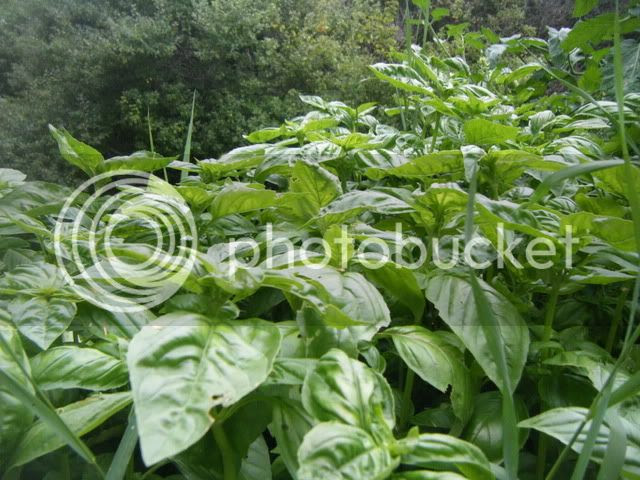 At the end of summer, when the basil plants had developed to their full potential, Mom would go in with the secateurs and cut down the tall stalks, leaving only the bottom leaves to grow into a second crop. Then began the lengthy process of plucking all the leaves off the stalks. 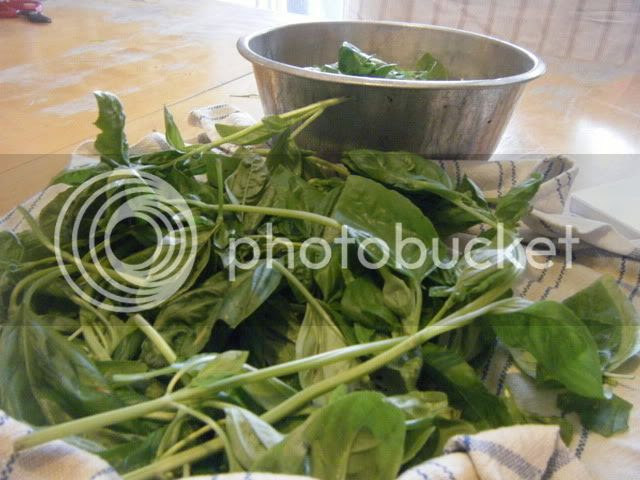 She would have the food processor going all day, combining the fresh basil leaves with parsley, pine nuts, garlic, parmesan and olive oil (using Molly Katzen's Moosewood recipe) to make this gorgeous stuff. 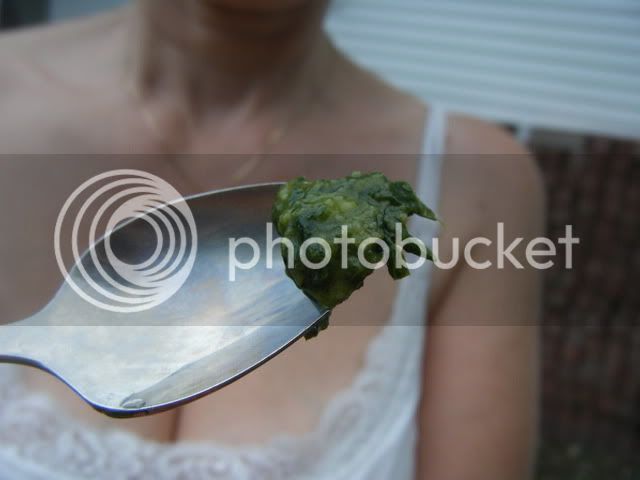 Every year, she gets quite a lot of pesto out of it. 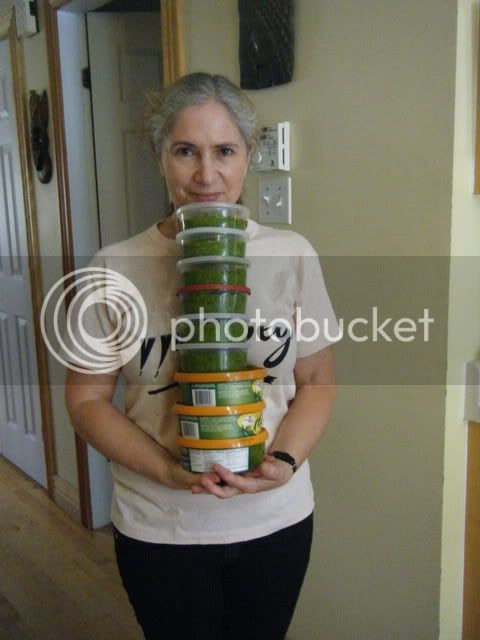 This year, when I was visiting home at the end of August, I helped out a bit, but even when I don't, I still try to take some home with me. The boyfriend and I put some in almost everything... including this gorgeous homemade pasta with mushrooms and spicy seasonal vegetables: 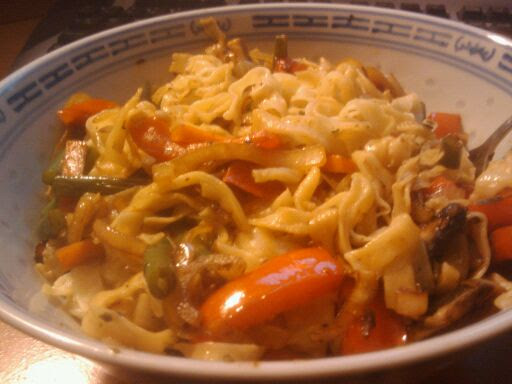 I really enjoy projects where I start with a few new balls of wool, and by the end of it, I've used it all up. That way, there are no pesky leftovers that you feel obligated to keep because there's too much to throw out (and for me, more than a foot of yarn is too much to throw out). This is why, when I decided to knit a baby blanket for my friends J&A's baby shower, I went with Lion Brand's Baby Love Diagonal Baby Blanket, which has a stupid name, but an interesting principle. 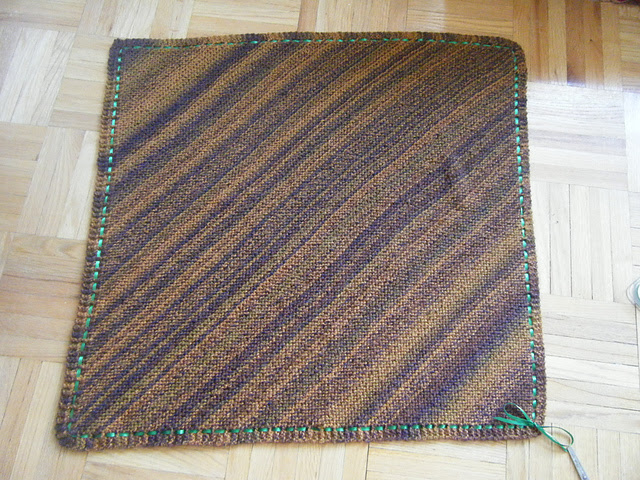 I bought two balls of James C. Brett Marble Chunky (in the Adobe colourway) and started by casting on 3 stitches, then increased one stitch per row until I'd run out of yarn from the first ball. Then I just had to attach the second ball and decrease until I got to the opposite corner. You don't have to worry about how wide or long the blanket is going to be to get the optimal usage out of your yarn because the thing will always turn out square.

I modified the first few rows by doing a knit-front-back-loop until I had 6 stitches, and then started the increases with the yarn overs as written. For the last few rows, I only did the yarn overs until 6 stitches remained and then I just decreased by doing one knit two together per row until I had 3 stitches left and bound off. I found it made for a much nicer square edge. I was really digging the ribbon some people had threaded through the eyelets created by the yarn overs, and so decided to give that a try. After unsuccessfully knitting a really long icord and running out of yarn before it was long enough, I caved and bought a pretty green ribbon to use instead. In retrospect, it probably wasn't the greatest solution, and if I were to do it again, I would go for the icord. As it turns out, satin ribbon isn't very stretchy, and garter stitch fabric is. This means that whenever I'd move the blanket around the ribbon would slide around in the eyelets and the blanket would stretch in weird ways. 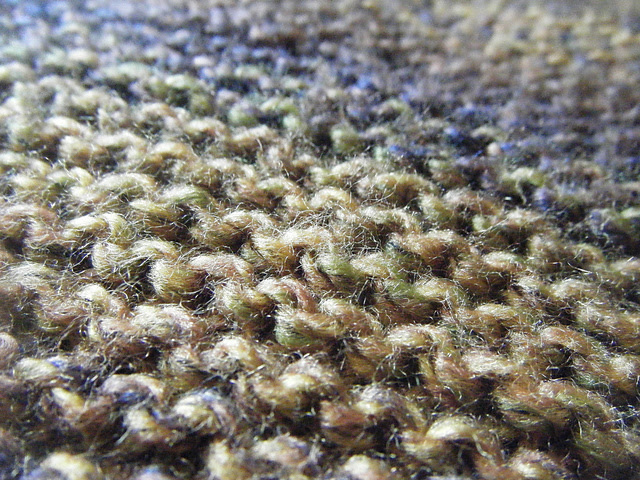 Besides the ribbon, however, I'm pretty happy with this blanket. The yarn is so soft and squishy, which is only accentuated by the garter stitch, and the colours are beautiful. I would probably make this pattern again.
Posted by Unknown on 10/08/2010 08:23:00 AM 0 comments

Lately, I've been doing that thing people call "burning the candle at both ends", a condition brought upon by deadlines for grant applications and generally having way too much on my plate with the start of classes. As a result, I'm sick for the second time in two weeks, most likely the end product of getting fewer than 5 hours of sleep most nights and not eating regular meals... and maybe some stress thrown in there. For not getting sick in a whole year, I'm certainly making up for it now.

Anyway, enough about my health. Let's talk about pretty shiny things. I like pretty shiny things, things like my new pretty slinky skinny lacy beaded scarf. I started it during the Stitch 'n Pitch in July and finished it up during my trip to the Townships in August, and it was my first attempt at knitting with beads, which, I'll admit, was a little annoying. At least, having all 200-something beads strung on the yarn beforehand and having to pull the yarn through them all is pretty annoying. I would find another way to do it next time.

The yarn however, some Dye-Version Bamboo Sport I bought at the Purple Purl way back in August, 2009, was an absolute joy to work with... So silky and smooth... 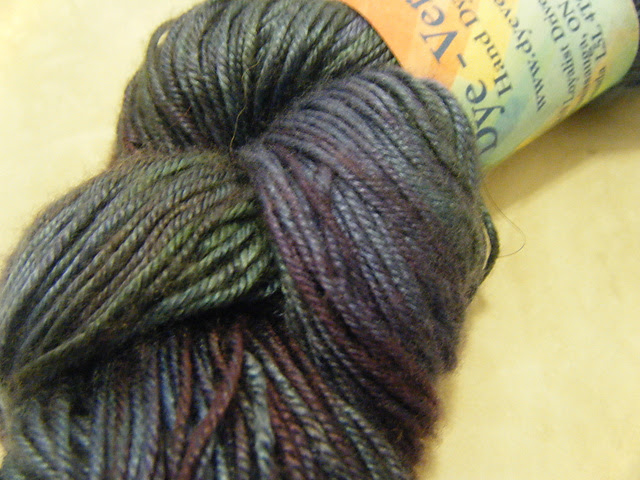 I used the Twin-Leaf beaded scarf pattern by Jeanne Giles, which was pretty easy to memorize after a few repeats. I did 51 repeats in total, which made the whole thing over 6 feet long... pretty sizable. Again, knitting the beads was slightly annoying, but kind of neat, and I absolutely love the end result. Enough that I'd do it again in a different pattern. Anyway, I didn't make any major changes, so without further ado, here are the pretty pictures: 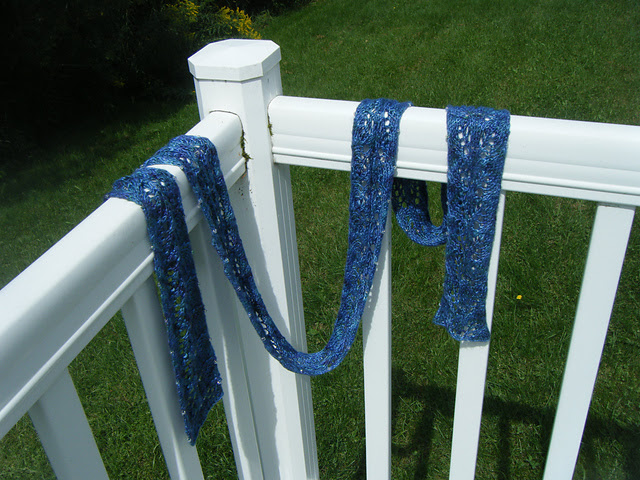 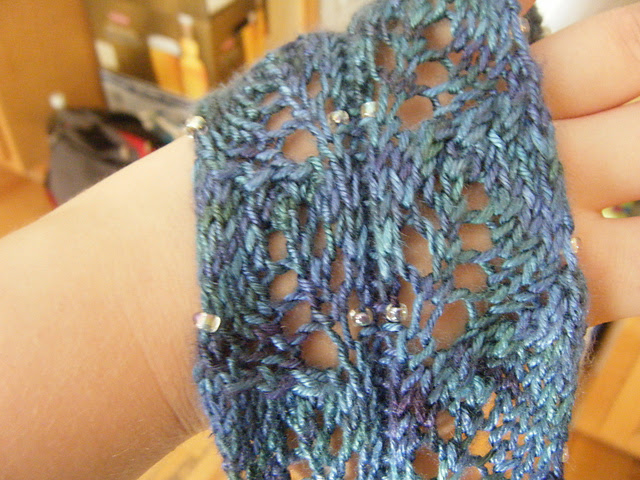 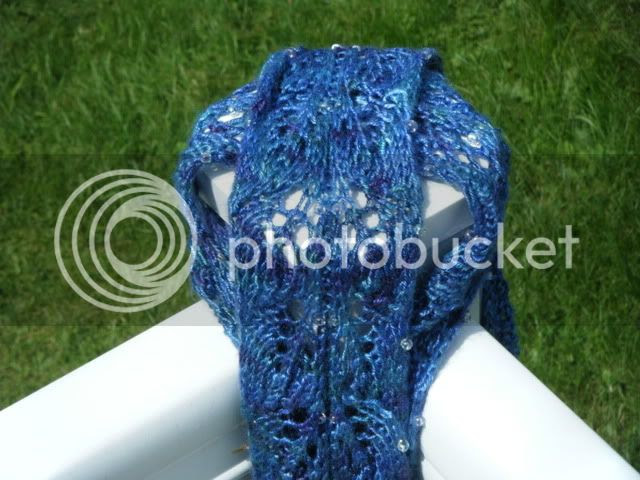 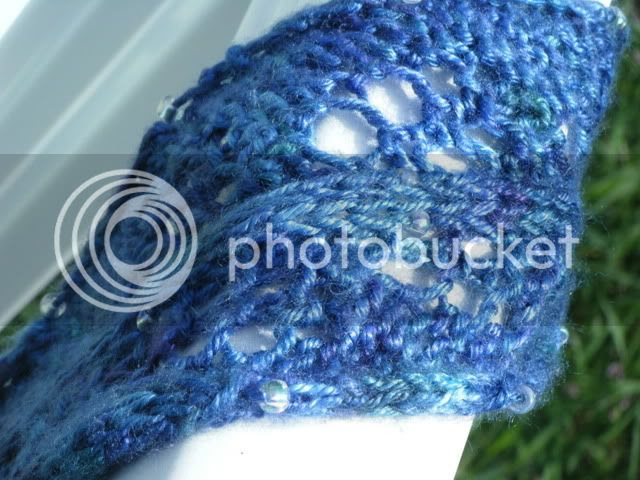