I am Canadian, and therefore I talk a lot about the weather. This last week, winter has really decided to flex its muscles in Toronto with whopping lows of -20 C and lots of snow to go with it. Despite the fact that I grew up in Quebec, I've never really appreciated the cold. As I was walking down the snowy street towards the subway station, pining for the warmer weather, in the meandering way my mind works, I was reminded of all the weddings I went to this summer... and I realized I had never finished blogging about all the crafting I did for said weddings! Well then. That had to be rectified.

So here we are, in the middle of January, reminiscing about some cool stuff I made waaaaaaay back in August and September. You might recall my first post about wedding crafting, where I mentioned that I had something ready for an upcoming wedding, which, at the time, was coming up in a few days. Well, this was the wedding of a very dear friend of mine, in fact, the brother of the wife in the happy couple we saw get married last year. For him, the boyfriend purchased an epic drinking horn. He enjoyed it very much at the reception...

For his lovely wife, I decided to make something slightly more practical, and yet incredibly nerdy... A Tardis shawl! I know the both of them are huge Dr. Who fans (I remember him watching the entire series from the beginning back in undergrad), so I figured it would be appropriate. I used the Bigger on the Inside pattern by Kate Atherley, and I absolutely loved working it. The "time vortex lace" was a little boring after a while, but the Tardis pattern, even with the super long rows, was incredibly addictive. 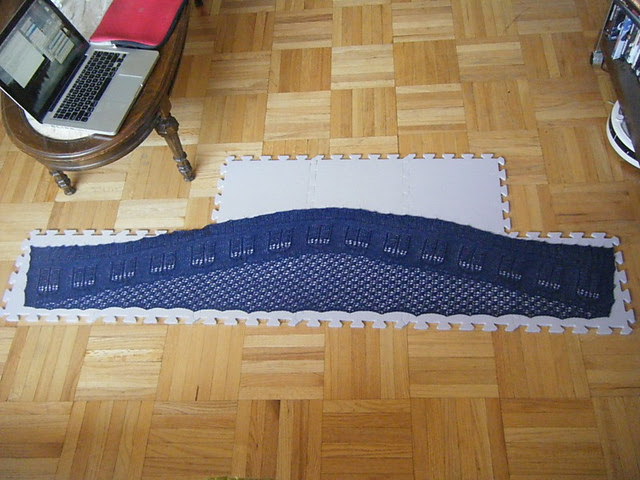 It blocked out to about 6 feet wide, which was almost too big for my blocking mats and also 2 feet longer than it was supposed to be. Whoops! Oh well, it's a beautiful scarf anyway. 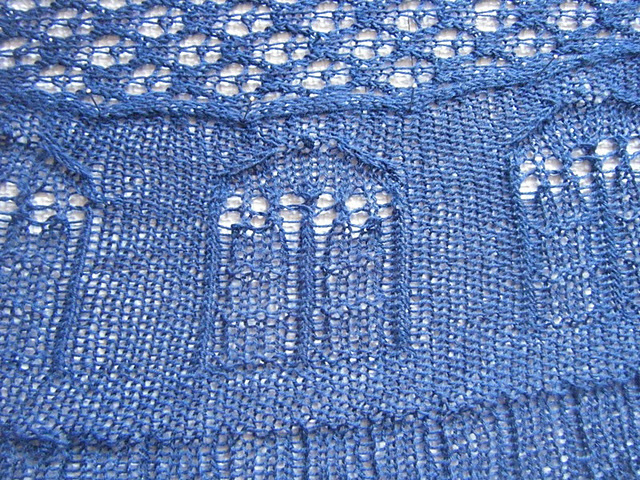 The yarn I used was Cascade Heritage Solids in a perfect Tardis blue colourway (actually, the colourway is called "Marine"). This yarn is also a joy to work with! It's great for socks (I'll get to that in a later post), it's soft, it's sturdy-feeling, and it also comes in a wide range of solid colours (pretty rare for a sock yarn). I'm a huge fan, and I'd definitely use this yarn again. 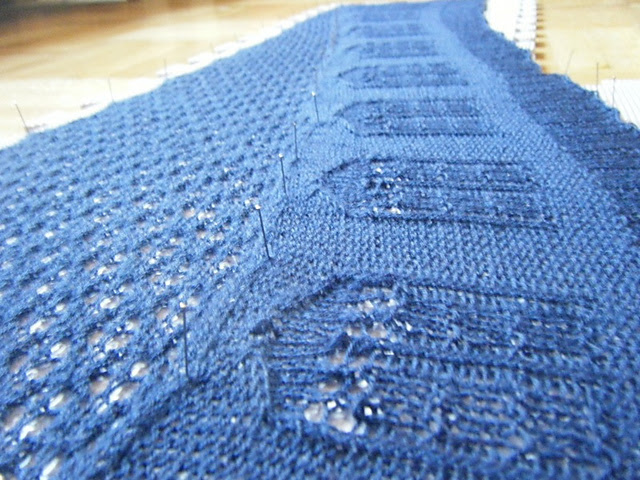 The final bit of wedding crafting I did let me return to my wedding-crafting roots... I made a pair of potholders. It was for the boyfriend's sister's wedding, and shortly after the wedding, they'd be moving to Switzerland together to start a new life there. I decided to crochet these, since it was a bit of a last-minute decision to make them, and since the boyfriend and I are a little obsessed with molluscs of late (you should check out the boyfriend's band), I decided on a snail theme. 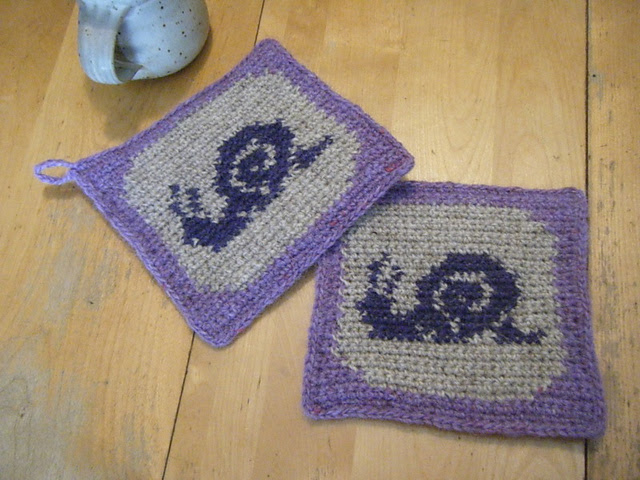 I actually combined two patterns for this one. I used the Snails Chart by Stephanie Law for the main design and then this Bluebird Potholder pattern by Doni Speigle for the general design. It's double-sided, so super sturdy. 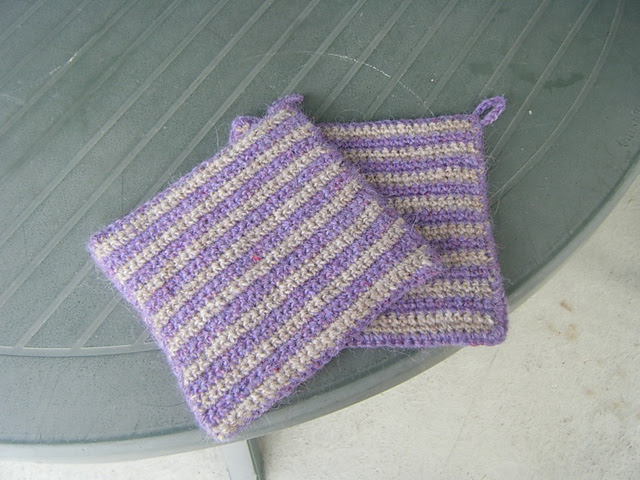 The yarn is a Lopi which a friend brought me back from a trip to Iceland. It's kind of scratchy, but works wonderfully for colourwork. I'm looking forward to making something neat with the rest of it.
Posted by Unknown on 1/26/2013 10:08:00 AM 0 comments

After spending a week in sunny Long Beach, CA for a conference (you know I just said that to make you all jealous), here is instalment number two of the Christmas knitting! It was actually a lot of crochet too, you know, to be fair to the craft which inspired this blog's title.

This first project was actually finished before I left for the holidays, despite deciding to make it at the last possible minute. I created it for the new baby of a couple with whom I have played many many games of Settlers of Catan. It therefore seemed fitting to create a Catan blanket for their new little bundle of joy: 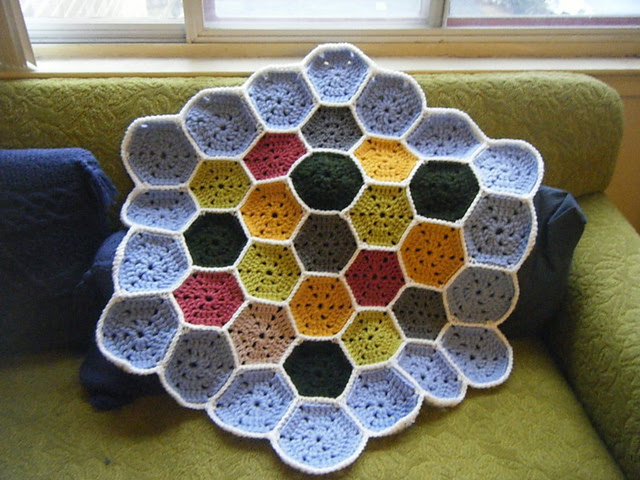 This little blanket, which is approximately 3 feet in diameter (I didn't actually measure), only took me a week to crochet. I thought I'd get super bored of the repetitive hexagon pattern, but it was actually kind of addictive. I'd be willing to entertain the idea of doing a grown-up sized version in the future, potentially as a stash-buster. 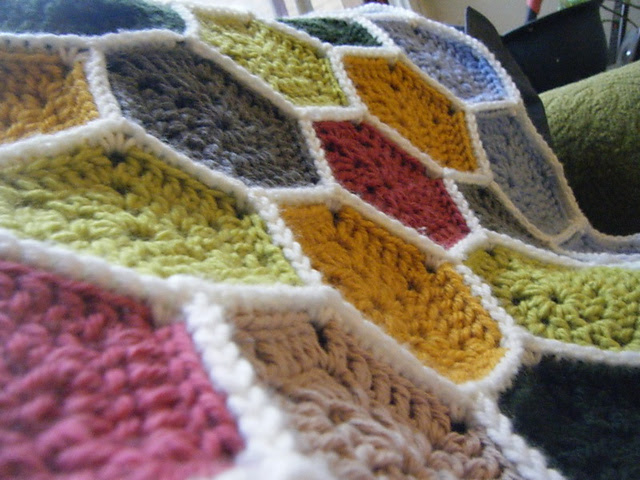 I would love to tell you that I used up a significant portion of my stash crocheting this, but I would be lying if I did. The red, light green, grey, and tan hexes were made from yarns I already owned, but I ended up buying some big balls of Mary Maxim yarn for the rest of it. Bulky acrylic is all I remember... nothing noteworthy.

I couldn't really find a hexagon pattern I liked, so I made up my own. Here it is, if you're interested:

Next up we have a ridiculous sheep hat created for a toddler that ended up way too big. 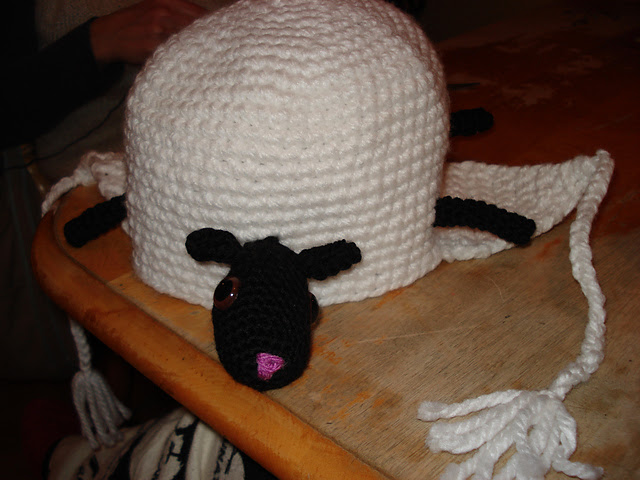 I've been told it fits the child, though I probably could have given it a lining to make it a snugger fit. I started with this Sheep pattern by Alexandra Cohen, but soon discovered that the kiddie has way too many toys. Easy! It's a hat now! I just kept increasing the body part until it looked roughly hat-sized and kept crocheting straight until it was roughly hat-length. Then I added earflaps (which I more or less made up on the spot and can't remember now) with super cool ties and tassels. Here's my mom modelling it and pretending to be a sheep: 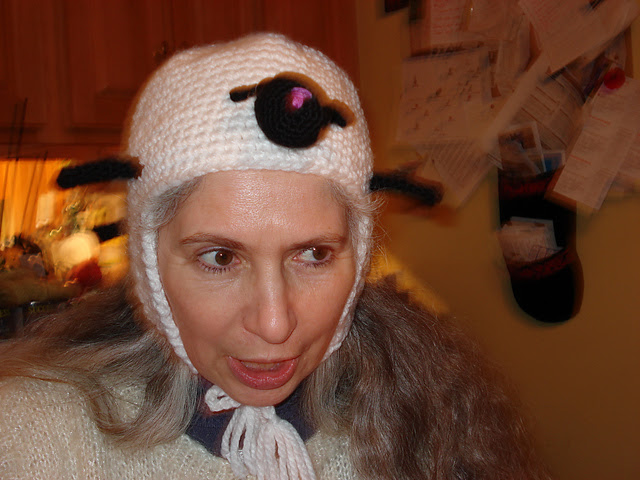 Finally, we have one final silly project, this time knitted. I had originally planned on making a huge Appa (from Avatar: The Last Airbender) stuffed toy for my friend Ed, but I ran out of time and motivation, so instead went for the next best thing: an Appa toque! Because it's not fair to only have silly pictures of my mom, here I am modelling it: 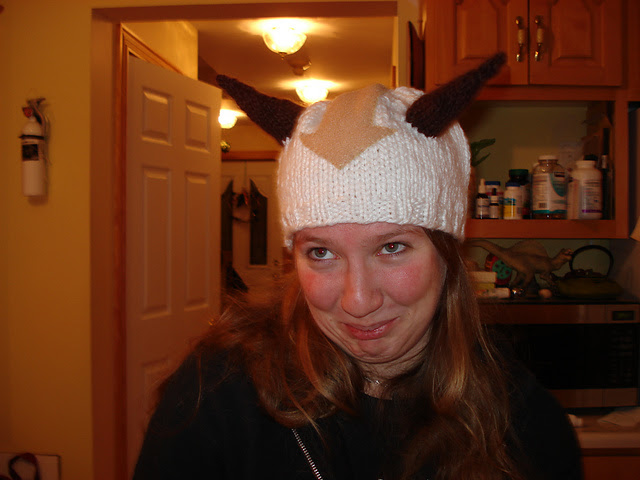 I used the pattern Yip-Yip by Lesley Brownlee, only instead of the intarsia arrow, I opted for a sewn-on felt one (mostly because I didn't have the right colour yarn on hand). It's a pretty cool pattern, but I think if I were to do it again, I'd change the crown decreases because they were a little abrupt. Also, the toque doesn't quite cover my friend's ears. He's nice enough to wear it anyway.

Happy New Year to all! Despite my blog silence, I've been extremely busy on the craft front. This year, I only decided to knit for one person, my dear old dad, for Christmas. And then, at the last minute, I realized I hadn't gotten anything for my friend Ed, nor my friends' new baby or his older sister. Whoops! And so the madness began, a mere two weeks before Christmas.

The one hand-crafted gift I had planned in advance was a pair of guitar socks for Dad. The reason was that the pair I had knit him a couple of years ago, through bad planning, had shrunk a bit and were unwearable. They had always been tight because of the method of construction (the top part is knit flat and sewn together, and the yarn choice was not optimal for socks (Knit Picks Palette), since it felts easily.

So this year, I actually got the right foot measurements (instead of just his shoe size), I went with a pattern I know will work (toe-up), and I bought a yarn that I know is machine-washable (at least according to Ravelry). The result, if I do say so myself, was perfect... 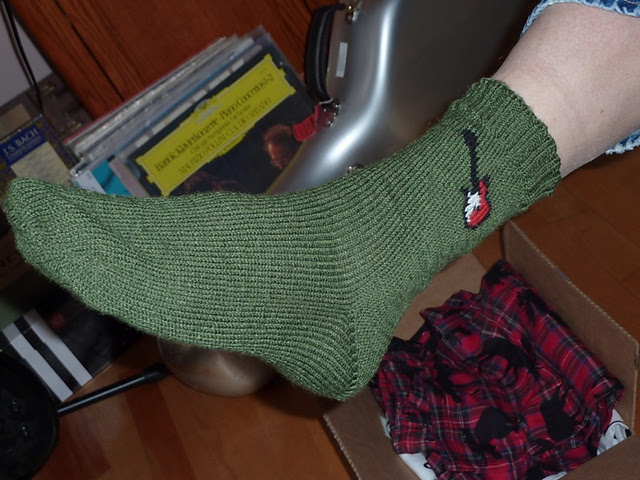 The yarn is Spud & Chloë Fine in the Green Bean colourway, which is a wool-silk blend that feels absolutely lovely both during the knitting and knit up. Instead of my regular short-row toe, I went with the toe-up cast on featured here, casting on 12 stitches on each needle, I believe, and increased two stitches on each side every other row until I had a total of 72. I then did a short-row heel with 12 wraps on each side and finished off with a 2x2 ribbing and Jeny's surprisingly stretchy bind-off.

The guitars were added using duplicate stitch using some left-over Knit Picks Palette. I discovered that I actually really enjoy duplicate stitch. It doesn't always look as perfect as when you do colourwork in the pattern, but it's always much stretchier, and I had learned my lesson from the last pair of socks. Here's the chart I made up, in case someone else ever wants to use it: 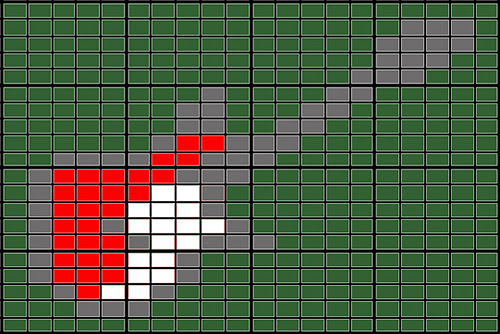 He seemed pretty pleased with them! (What a goof!) 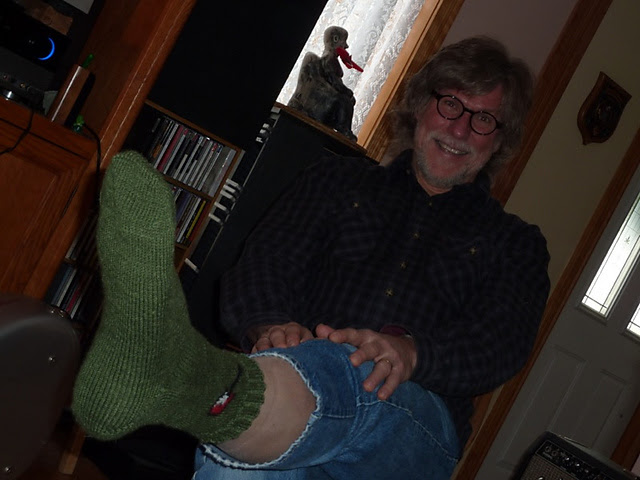 Speaking of gifts for my Dad, I also whipped him up a hat, which I called a late birthday present. The last hat I made him, way back when I had my first crafty Christmas, was (again) a bit too small. So I picked up some Patons Decor at the local yarn store (Lennoxville has a LYS! Rejoice with me!) and whipped up a suitably manly hat. I used Claire Nordlow's 2x2 Rib Hat pattern, which is quite excellent, and did the ribbing for the whole 10 inches so that he could roll up the brim. I just love that simple little triangle on top! 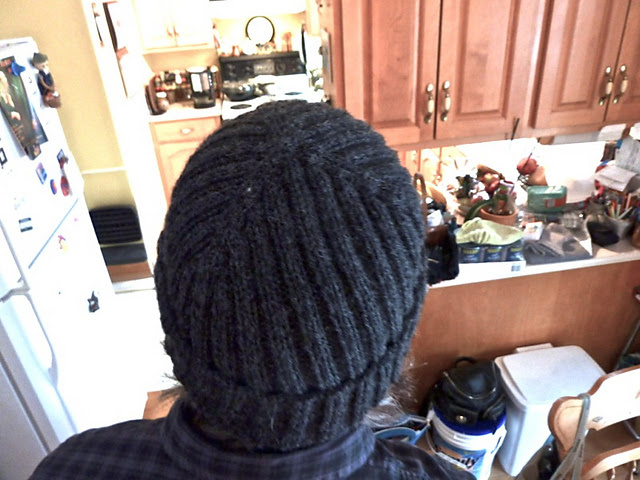 Dad was quite happy with this one too. It's super cozy. 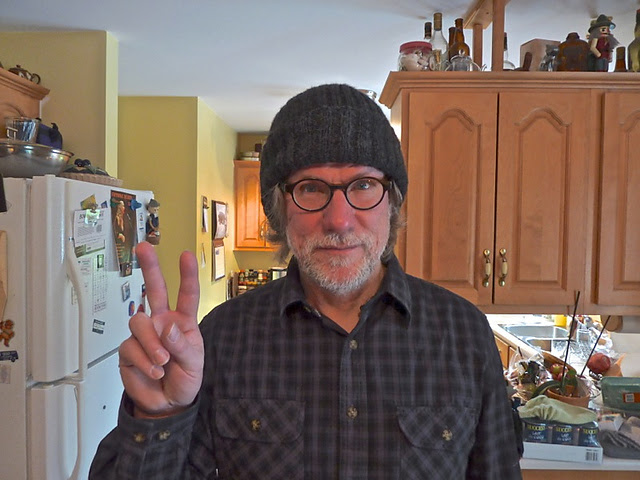