Things, as usual, have been very busy. I found out that I did indeed pass my general qual (like there was ever any doubt!), and then rushed to get my research poster finished and printed for the NRDA conference last week. I'll save the details of that trip for a separate post. I got back into the city Saturday evening among all the G20 craziness, but fortunately, my supervisor gave me a ride in his rented car, and I was able to avoid downtown. Now, I should be rewriting my code to be able to accept multiple hybrid combinations in a row, but I've come down with a terrible headache and so I'm blogging instead. May as well be sort of productive!

Today I thought I'd show you some pictures of these earrings I made my mom back in February (better late than never, right?), which I had intended to also act as stitch markers, though I don't think Mom's used them in that capacity, which is fine. I bought a couple of sets of clip-on earring findings at Mary Maxim, one gold set and one silver set. For the gold ones, I decided to make it simple, and just thread a few beads onto a headpin and make a loop with my trusty needle-nose pliers. 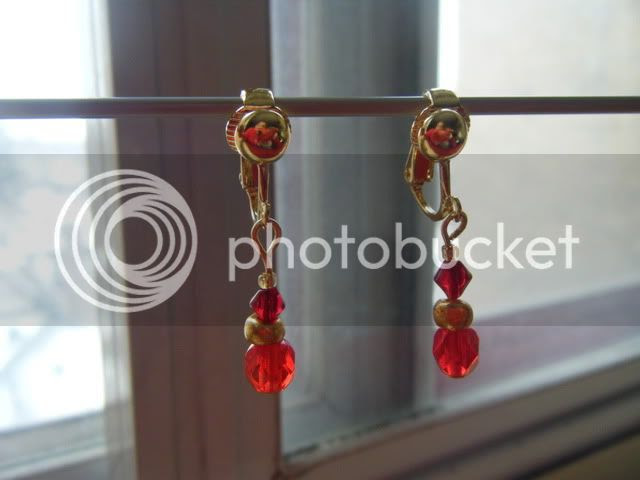 I think they're actually quite cute, and I really like the look of gold and red together... it's got something of the regal to it. For the silver earrings, I decided to go a little more on the fancy side. I based these on the Chandeliers from the Anticraft, but I didn't have enough jump rings to do the pattern suggested in the book, so I made it up a little as I went along. 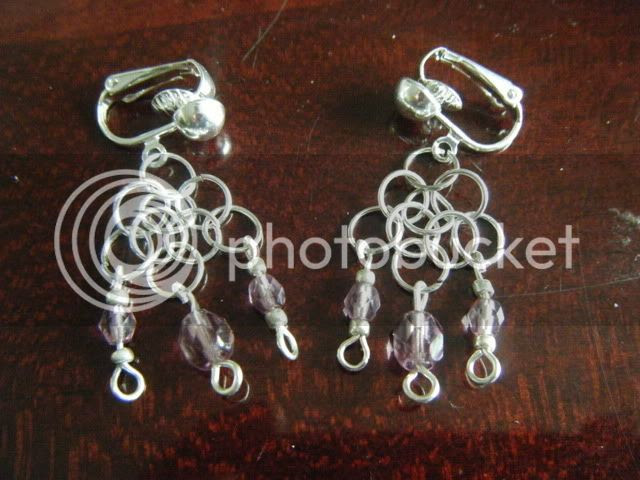 Making chainmail is kind of frustrating since if you put a ring through the wrong way, it totally doesn't work anymore, but I guess that's more or less true of any craft. Even though it's not terribly forgiving, I think I would try it again, just gotta buy me more jump rings.

So, that was my latest jewellery-making extravaganza. I should really do more of it. Next time we speak, I will probably show you some amazing baby knitting! Oh the cuteness!

Ahhhh... the post-qual slump! Well, not quite. I did finish my general qualifying exam on Tuesday (and I won't know if I pass until next week, argh!), but I still have to pass a thesis qual which will involve presenting my thesis topic and answering questions related to it. I'm also attending a conference at the Perimeter Institute next week, and have to prepare a poster for that. Sooo... I'm not exactly going to be able to relax for the next month or so.

Anyway, I thought I'd talk to you today about a project that was the embodiment of how much I hate finishing. This is the Belladonna Sleeves (Ravelry link) by Erssie Major from Anticraft, a book I really can't praise enough... I mean, this is my second project from this book, which is more than I can say for most of my books (with the exception of Son of Stitch 'n Bitch and Crochet Me). 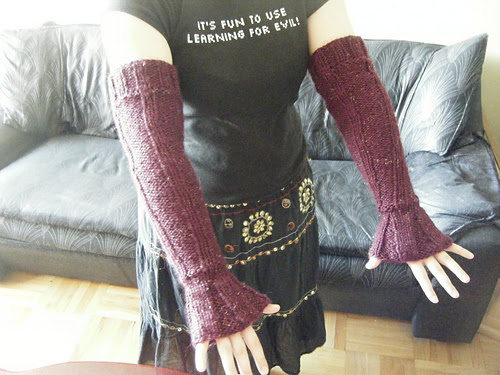 So the pattern is basically supposed to represent a belladonna (or deadly nightshade) plant with a fluted opening for the cuffs symbolizing the flower and these big ol' bobbles that are supposed to be like the berries. Well, I'm not so much into bobbles (they remind me too much of pimples), so I decided to forgo those in my version, and I'm very happy with that decision. I also didn't decrease for the ribbing (probably a mistake), or change needle size, but I did sew an elastic ribbon into the tops, which seems to prevent any slippage problems. 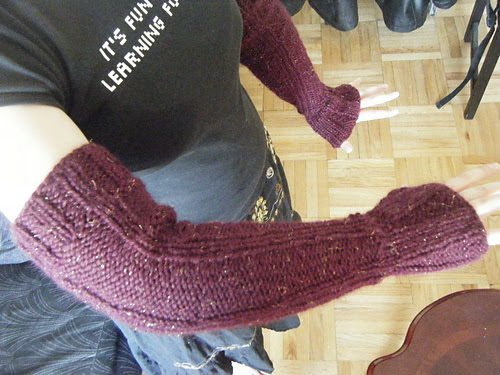 The yarn I used was Plymouth Yarn Baby Alpaca Worsted Glow, a lovely lovely lovely soft worsted alpaca with little shiny threads woven throughout. The colour is a beautiful dark plum, but I don't know what the name of the colourway is. Unfortunately, I think this particular yarn has been discontinued, but I got it from WEBS at a discount.

The reason this project is the embodiment of how much I hate finishing is that it took me from April 14th to April 30th to actually knit the sleeves, but I didn't actually finish sewing in the elastics until May 19th... Yes, that's right. It took me longer to sew in a couple of elastic bands than to knit two whole sleeves. I don't know why... I already had all the materials, and when I actually sat down to do it, it probably took less than an hour. I guess this is why I should just stick to projects where it's done as soon as it comes off the needles with maybe a couple of ends to sew in. I just have no patience for all that non-knitting (or crocheting) stuff!
Posted by Unknown on 6/18/2010 04:48:00 AM 1 comments

A few days before I went to Halifax, it was my birthday. A few days before that, I was woken up by the boyfriend who unceremoniously plopped something on top of me and groggily mumbled, "Happy Birthday..." The briefly mysterious early birthday present looked like this: 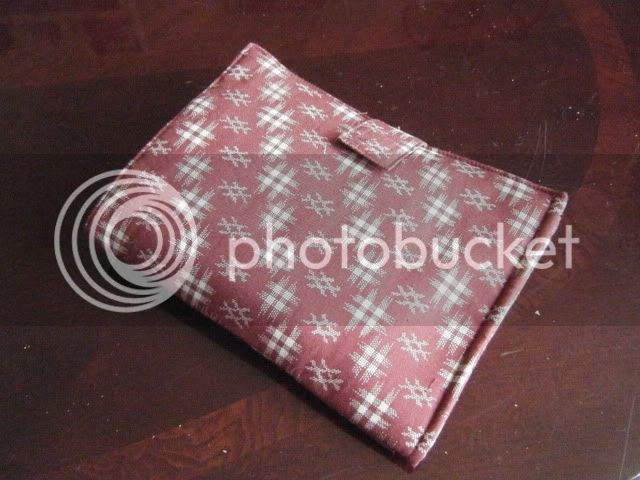 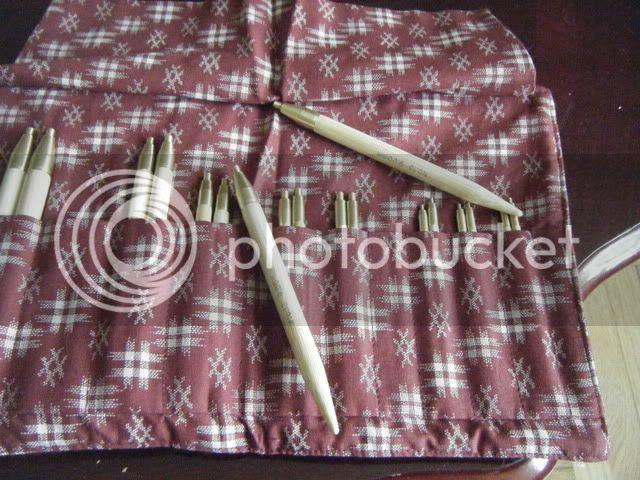 And in the side pouch, there were these: 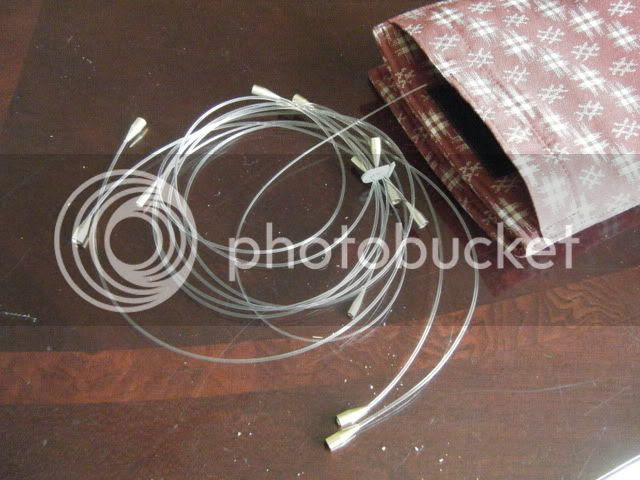 Hurray! It's a KA bamboo interchangeable needle kit! It has 3.75mm to 10mm sized needles (10 sizes in total) with wire lengths 16 to 53 inches. With the exception of projects needing teeny tiny needles (like socks), I think I have all the needles I'll ever need just in that kit.

They're really high quality too. The boyfriend certainly did his research. The bamboo feels really nice to work with (I used to be an aluminium-only girl, but I think I've converted), and the screws to attach the needles to the cable are really high quality. They're designed so that they won't come unscrewed while you're knitting since the cable will twist independently of the screwing bit. It's a pretty good design.

I'm completely unable to sit through scientific talks without falling asleep unless I'm doing something with my hands. Since I wasn't sure about bringing my knitting needles on the plane to Halifax, I decided to start a new crochet project during CASCA. I wanted to choose something that wouldn't require too much attention to gauge and that I wouldn't need to try on as I went, and so I picked the Sweet Pea shawl by Amie Hirtes from the Happy Hooker. 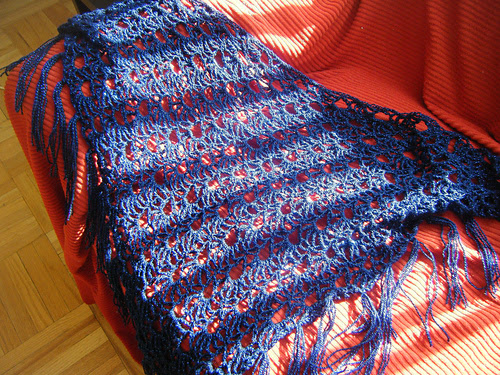 The yarn I chose was Vanna's Glamour from Lion Brand Yarns. This is my first time using a LB yarn, despite devoutly listening to every episode of Yarncraft, and I wasn't disappointed. I found it to be a little inconsistent in width, and it stained my new bamboo crochet hook blue, but I did like the sparkliness. Sparkliness is good. 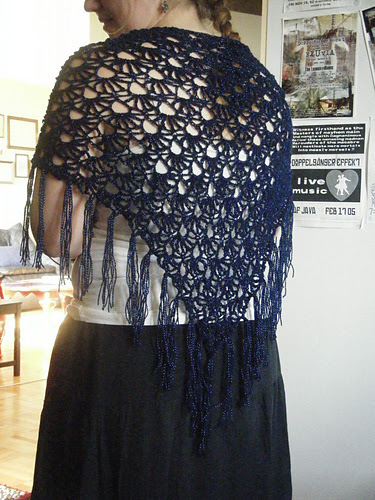 Overall, I'm pretty happy with this pattern. It wasn't so easy that it was boring, but I was able to memorize the stitch pattern fairly easily. By the time I started getting sick of the pattern, I was almost done. The results were certainly good, and I didn't even have to block it. I was worried about using such a thin yarn with a 6mm hook, but it ended up ok in the end. Hurray!
Posted by Unknown on 6/06/2010 06:31:00 PM 3 comments