55 Cancri in the Skies with Diamonds

I was recently considered as an interviewee for Radio-Canada (I knew being fluent in French would pay off someday!) to be the "expert" about a recently characterized "diamond planet". I did a lot of research on this new discovery, but I didn't end up doing the interview. Since I hate letting good research go to waste, I thought I'd talk about it here!

Artist's concept of 55 Cancri e - Credit: NASA/REUTERS
This extra-solar planet was first discovered in 2004 (by McArthur et al.) orbiting around the star 55 Cancri A, a sun-like star about 40 light years away in the constellation Cancer. It has the designation "A" because it is in a wide binary system with a much smaller red dwarf companion. McArthur and company discovered the planet by the radial velocity method, that is, by looking at the Doppler shift of 55 Cancri A due to the wobble caused by the gravitational pull of 55 Cancri e. Sort of like this:

Image stolen from Wikipedia
The radial velocity measurement gave astronomers an approximate mass for this planet, and also the orbital period, but it wasn't until recently, when, in 2011, 55 Cancri e was observed transiting its host star (by Winn et al.), that we were able to determine how large this planet is. The transit measurements, by the way, were taken with the MOST satellite, which is the only Canadian Space Telescope. It looks kind of like a suitcase:

Image stolen from UBC's MOST website
Anyway, based on the transit and radial velocity data, it was determined that 55 Cancri e is eight times as massive as the Earth, and its radius is twice that of the Earth's. That would give it a surface gravity about twice as large as on Earth. In addition, its orbital period (or year) is only 18 hours long, which would give it a surface temperature of over 2000 degrees Celsius! We shouldn't go around calling this a second Earth any time soon... it's hot and heavy over there!

The most recent development, which made the news last week, is that astronomers (Madhusudhan et al.) now think that this planet might be made primarily out of carbon. That would mean that it would have an iron core, a layer of diamond (which might be 3 times as massive as the Earth), and a molten graphite surface. Previously, it was hypothesized that 55 Cancri e might have a rocky core like the Earth's surrounded by a layer of super-heated water. That assumes, of course, that it's made of the same sort of rocky stuff as in our own solar system which is primarily oxygen-based. 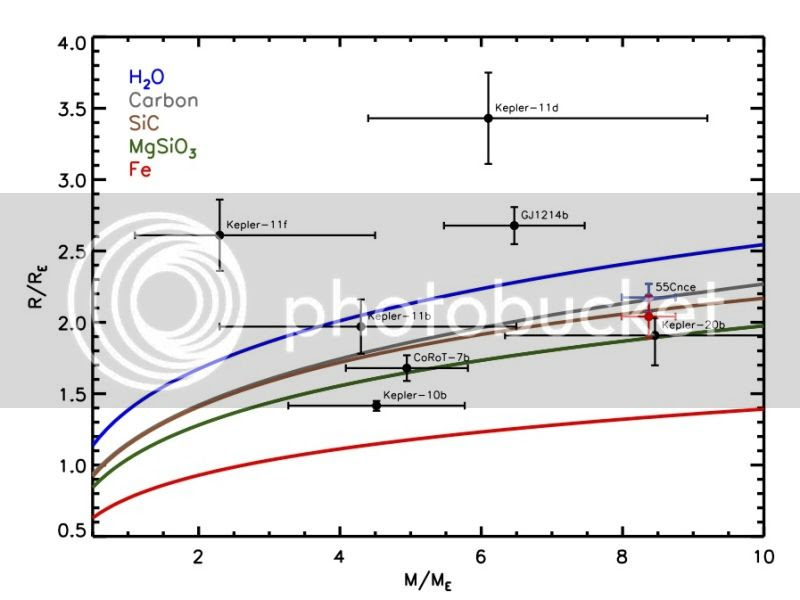 Fig. 1 of Madhusudhan et al.
The plot above shows the radius versus mass of several extra-solar planets, including 55 Cancri e as the red and blue dots (these represent two different measurements). The different curves represent various models based on the composition of the planet, and a primarily carbon-based planet seems to make sense in this case. It helps that the host star appears to have more carbon than our own sun, and that a superheated water layer would be extremely volatile. More measurements, of course, will help determine the exact composition of the planet.

This is the first extra-solar planet that is thought to be made of diamond (unless you count that "diamond planet" I talked about last year), and if 55 Cancri e turns out to be carbon-based, it would revolutionize how we think of planet composition. We usually think of planets being composed of mostly the same stuff as in our own solar system, but there's no reason why some planetary systems couldn't be made up of slightly different stuff!

Well, fall is definitely upon us. I can no longer get away with wearing my flip-flops without freezing my tootsies off, I have had the requisite seasonal cold, and the leaves are starting to turn shades of crimson and gold. Fall is a beautiful time of year (and it does mean pulling out the woollens!), but I do miss summer already. I thrive in the heat and sunlight, what can I say?

And this summer has been a particularly good one for me in terms of improving myself and learning new skills. I learned to run, I lost almost 30 lbs, and in the craftier department, I learned how to hand-dye yarn! This was several months ago, but I thought it would be worth sharing the process with you all.

First, we soaked the roving...

We used Dharma Acid Dyes, which were what Joanna had on hand. They worked quite well, I thought, though one of them ended up being grainy when mixed with vinegar and water.

Of course, all the special squirt bottles had to be labelled, since they weren't going to be used for anything else (at the risk of poisoning someone). We put a little vinegar in the bottle and then a bit of the dye we were going to use.

And then I went to town! Next time I'd probably try to saturate the roving a bit more with dye, but I'm pretty happy with my colour choices.

The final result was amazing. Here it is getting a rinse:

And then hanging out to dry:

Joanna also came up with a pretty colour combination:

And remember that yarn I tried to dye with Kool-Aid over a year ago? Into the pot it goes!

It came out a lovely shade of emerald green that I much prefer to the robin's egg blue it was before:

We tried many more things, and this was the final haul of the day. So many colours!

And now some glamour shots: