Pining for a new sweater

It might sound crazy, since spring has arrived in full force in T-dot, but I'm really really itching to knit myself a new sweater. I'm still in the midst of knitting for others, with a small sock project on the side (with my brand new gorgeous hand painted yarn... but more on that later), but I haven't really been immersed in the craft as much as I was previously. Part of it is that I've been riding the boyfriend's Gio E-bike around town instead of taking the TTC, and I think the other part of it is just general apathy. I've been spinning a bit while I watch TV with the boyfriend, but I haven't had the incredible urge to knit for some reason.

I'll be going to a meeting this weekend in Syracuse, NY, and it'll be a 5-hour drive each way, so that's a LOT of knitting time. I'll also be sitting through two days of talks, which is also a LOT of knitting time. I'll of course bring the "knitting for others" and my sock, but all of these projects are in various stages of completion, so I'm thinking I might have to start something new... But decisions, decisions! (I know, I lead a hard life.) Here are my options: 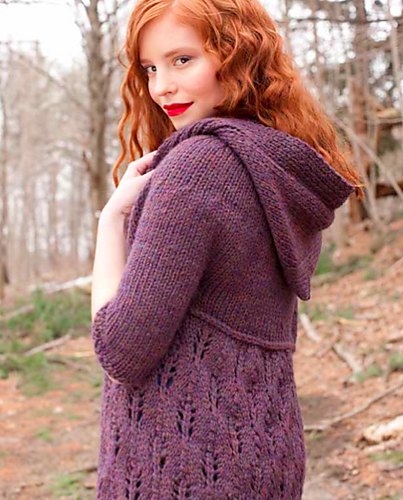 The Lore Hoodie is a pattern from Vampire Knits by Cirilia Rose. It's absolutely gorgeous... Really, it's the pattern that sells the book. I already have the yarn for this, some Diamond Yarn Galway Heather in the Thistle colourway (the same yarn I used for Dad's sweater). I guess I'm a little worried that it'll be too bulky for travelling, but it's also a design I've wanted to knit for a while now. I love the hood and that lacy skirt. 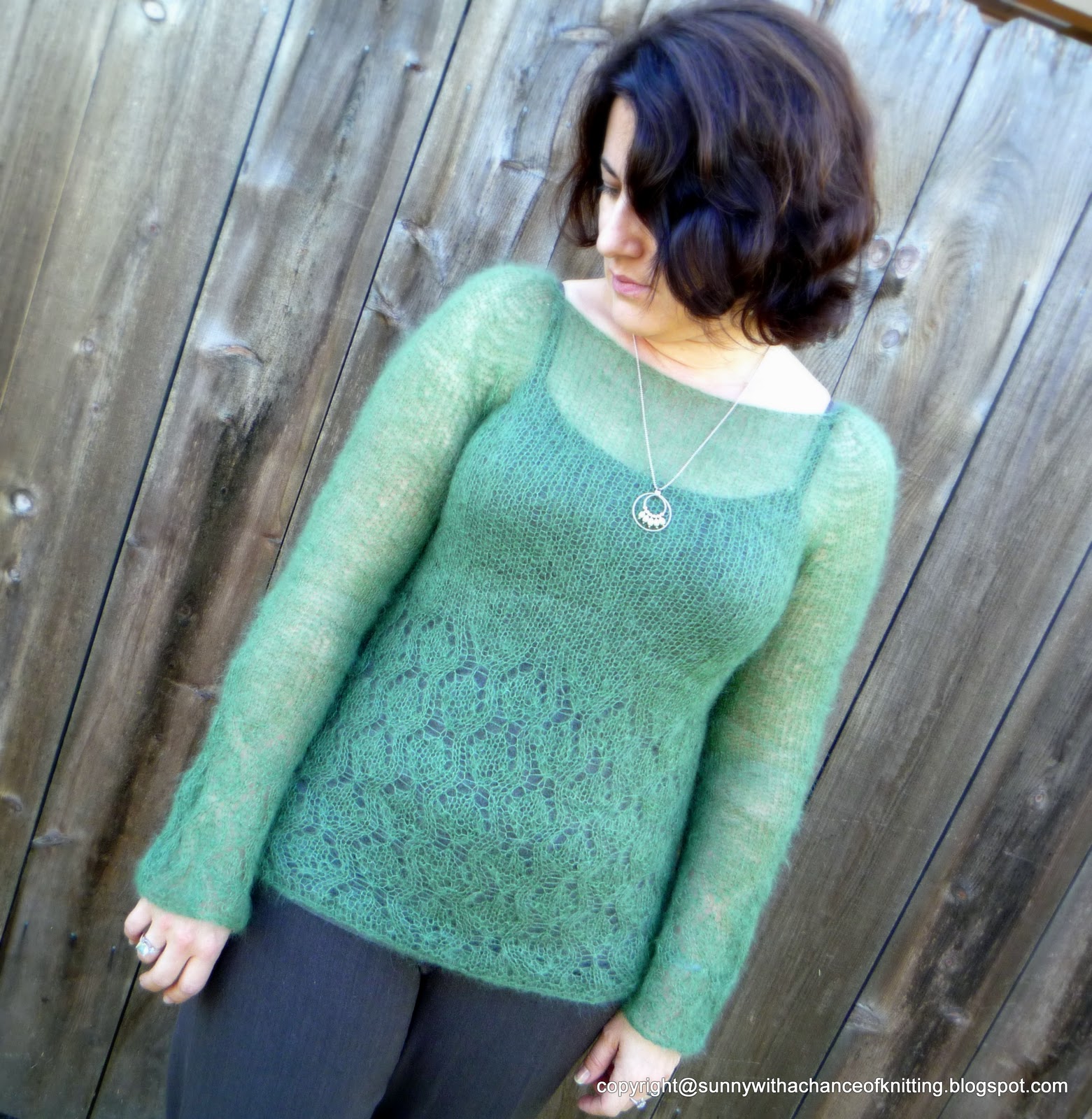 Next up is Morning Dew by Diana Rozenshteyn. This will definitely be portable enough, and will involve a considerable amount of mindless knitting (great for staying awake during talks!), so it's probably the top choice for travel knitting. Also, it's seamless and top-down, which is my favourite style of sweater (to wear and to make). I've got the perfect yarn for it: an acrylic-mohair blend that was given to me by the boyfriend's mother last summer called "Lanificio di Milano Mohacril". I haven't been able to find it online, so it's probably a vintage yarn (the labels look pretty old). Anyway, the issue would be that I'd already started a crochet project with this yarn, but have since partially frogged it. The yarn was broken in several places because it's so fuzzy, and I still have half of that other project to frog before I start this new one... 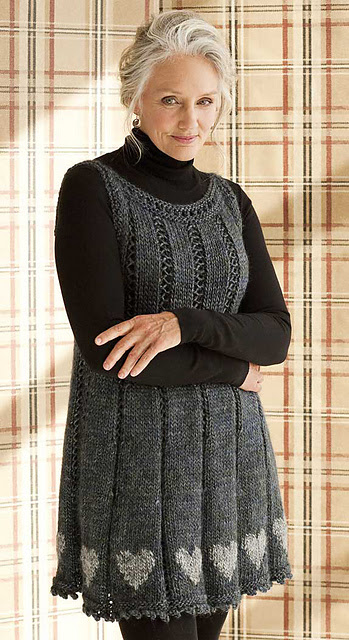 This pattern isn't really a sweater, but it's something else I've been wanting to make for a while. It's the #24 Jumper by Louisa Harding from Vogue Knitting Winter 2010/11. I'm going to use some Cascade Yarns Ecological Wool in a dark grey that I got on sale off of WEBS. I'll likely do the duplicate stitch in Bernat Roving, which I have in their bright pink colourway. It'll also be a fairly bulky project, so maybe not the best for travel, but it looks pretty darn adorable. Wouldn't it go perfectly with a waist-hugging belt? I think it would. 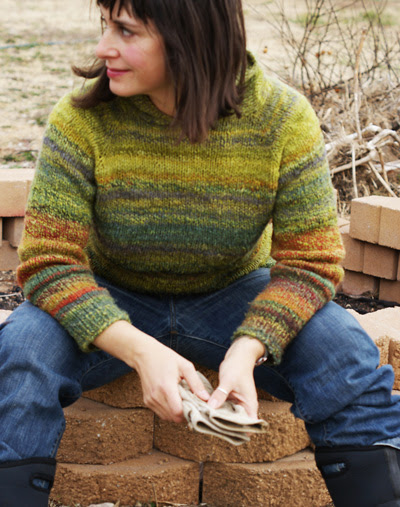 Finally, I'd love to knit this sweater as a hooded cardigan. It's Sporto by Nikol Lohr from the Winter 2011 issue of Knitty. Since it's a top-down raglan, it'd be super easy to convert into a cardigan just by knitting back and forth instead of in the round. I also have the perfect buttons for it. I'd use the left-over yarn from Dad's sweater, and alternate it in stripes with the left-overs from my beautiful cabled sweater. I'd also like to incorporate some stripes of my handspun to make it extra special. Again, it might be a little bulky for travel, but less so than the Lore Hoodie or Vogue Jumper because it's top-down, so would be relatively small at the beginning. And I just love that hood... so cozy!


Anyway, those are my choices. Hopefully I'll be able to make a decision before we leave Friday, though I also have to think about preparing my talk, and a million other things... le sigh!

Wow... A whole month without posting! I'm sorry, internet. I'll try to do better next time. How about I make it up to you with pie?

As I have for the last few years, I hosted a Pi Day party at my apartment on March 14th. We never got around to reciting the digits of Pi or playing Pi trivia (much to the boyfriend's relief), but much fun was had by all. We had quite a spread! 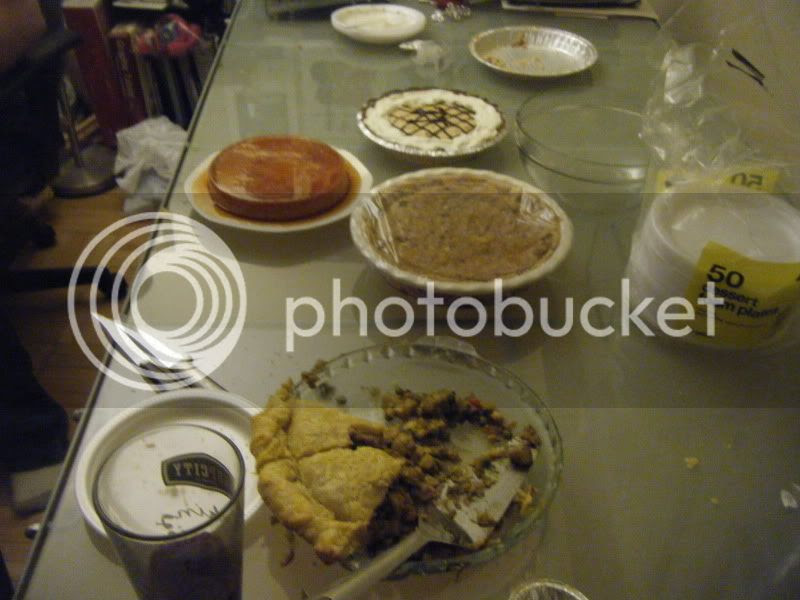 In the front is Joanna's vegetable curry pie, which was the boyfriend's pick as the winner of the Pi Day best pie contest, mainly because she made her own crust (and because it was delicious), behind that, we have Steph's chocolate chip cookie pie, then Lisa's coconut creme brule (frickin' amazing), and finally, my Pie Pie. The empty pie pan used to contain a bacon-brocolli-spinache quiche made by the boyfriend, which was instantly devoured. Classes at a pastry school are sounding pretty yummy right now.

I'd like to talk a little about the pie I made... The Pie Pie. I first saw this recipe on The Anticraft years and years ago, and I knew that one day, I would have to make it. The description blew me away (really, it sounds orgasm-inducing), and caramel, peanut butter and chocolate are some of my favourite flavours. At 448 calories per 1/8th of a pie (yes, I calculated it), it's definitely not for the health-concious, but really, it's so delicious that you really shouldn't care. 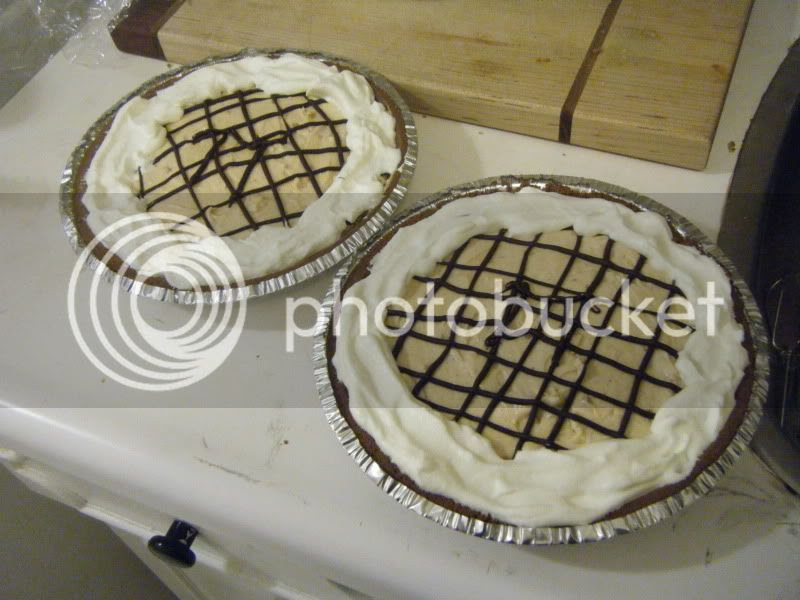 I decorated mine with the Pi symbol, of course. One pie got devoured at the Pi Day party and the other, we saved for a dinner party later in the month (really a get drunk and do your taxes party). Our hosts made all sorts of noises of appreciation, and I had to stop myself from eating a second piece (because of the afore-mentioned calorie content). This pie took a good five hours to make, so I'm probably not going to make it again any time soon. If I do, I'll try to make my own cookie crumb crusts, I think.

Anyway, the final verdict is, if you have a few hours to kill and an incredible craving for peanut butter caramel goodness (and aren't on a diet), then you should definitely make this pie. I'm seriously drooling just thinking about it right now...