It certainly must be said that at some point in your mid-to-late twenties, all of your friends will get married. This summer was certainly a testament to that (as was last summer) as I was invited to, and attended, four weddings. Fortunately, they were fairly spread out over the late summer and fall, so it wasn't overly overwhelming, and I've gotta say that each one was really a blast! And of course, because I am a crafter extraordinaire, for each one I had to come up with some sort of handmade component to each gift.

The first of the season was my cousin's. It was a gorgeous day in early August, the wedding was at a lovely golf resort in the countryside of Ontario, the ceremony was heartwarming, the reception was loads of fun (ohmygosh the food!), and I took no pictures because I forgot to bring my camera. I did, however, remember to take pictures of the absolutely adorable tea cozy which I made as a wedding gift. 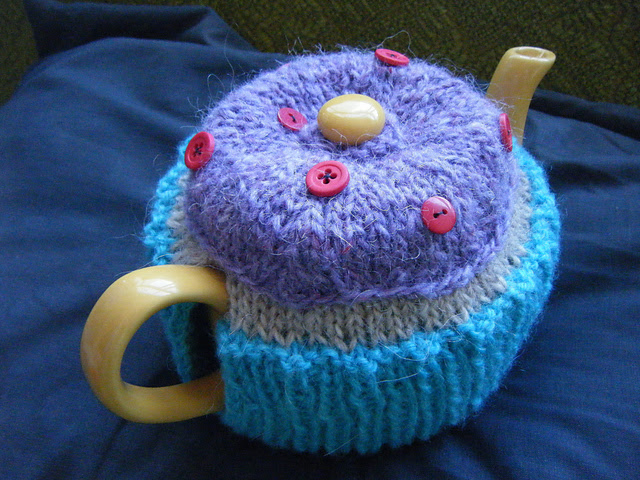 I used the Fairy Cake Tea Cozy pattern by Frankie Brown, and used a scottish yarn (the blue) and some icelandic lopi (the beige and purple) which were both given me as a vacation souvenirs. (I think it's an excellent habit to get people to bring you back yarn from the exotic places they visit!) The pattern was super simple and fun to make, and those buttons are frickin' adorable. The tea cozy was given with that cute little yellow teapot inside, and I also included a sampling of fancy teas.

Two weeks later was my friend Nic's wedding. As it turns out three (THREE!) of the lovely ladies from my knitting group (we're famous on the internet) got married this season. Nic's was the first, and it was absolutely lovely. I, again of course, forgot to bring my camera, but I've stolen (totally without permission) this picture which Lynn's camera took of four of us in the tree house (TREE HOUSE!) at the wedding reception. I have in my hands what's left of the spoils from the ice cream bar (FRICKIN' ICE CREAM BAR!!!).

For Nic, I knit some wine bottle cozies to go with the LCBO gift card I gave her and her new hubby. 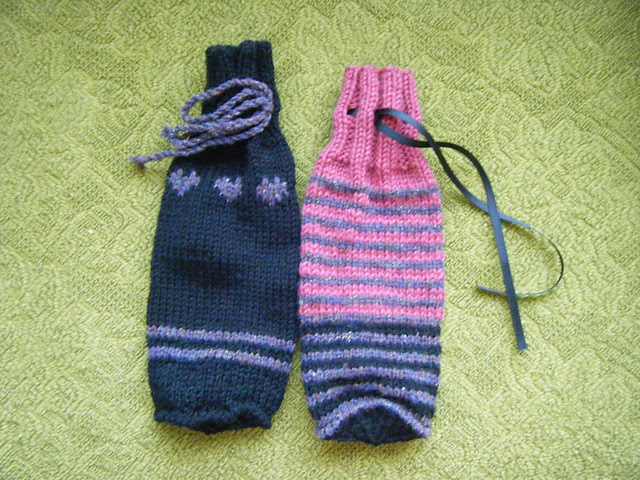 The pattern is Winecozy by Jennifer Carter and I used various soft and sparkly leftover bits of yarn. I'm an especially big fan of the adorable hearts on the black and purple one. The pattern itself is quite ingenious. I love the way the picked up tube thing makes the bottom quite stable. The only change I made was to knit in the round instead of flat.

Wedding #3 belonged to my knitting pal Erin. She had so much handmade goodness included in her special day! Probably most impressive (and not just because I helped), was the hand knit bridal and bridesmaids bouquets. All us knitter types in the group (and the token crocheter) helped a bit with that one, each of us making a couple of flowers. This picture is stolen from Erin's blog. 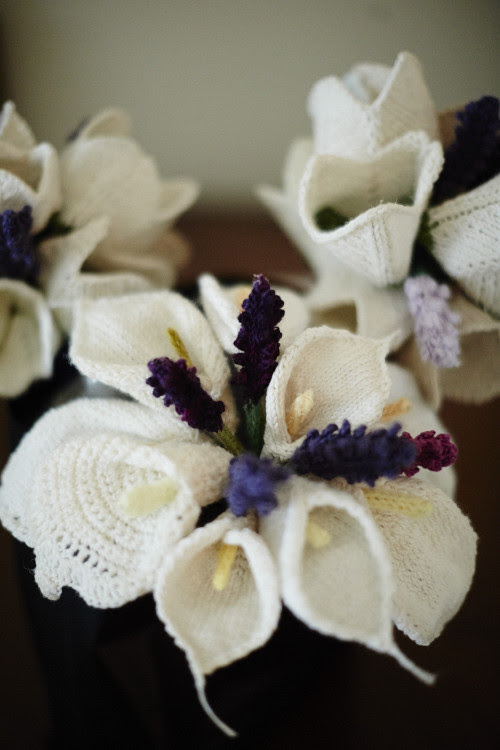 For her, I decided to try my hand at sewing and put together these napkins with nice folded edges and aluminum wire napkin rings: 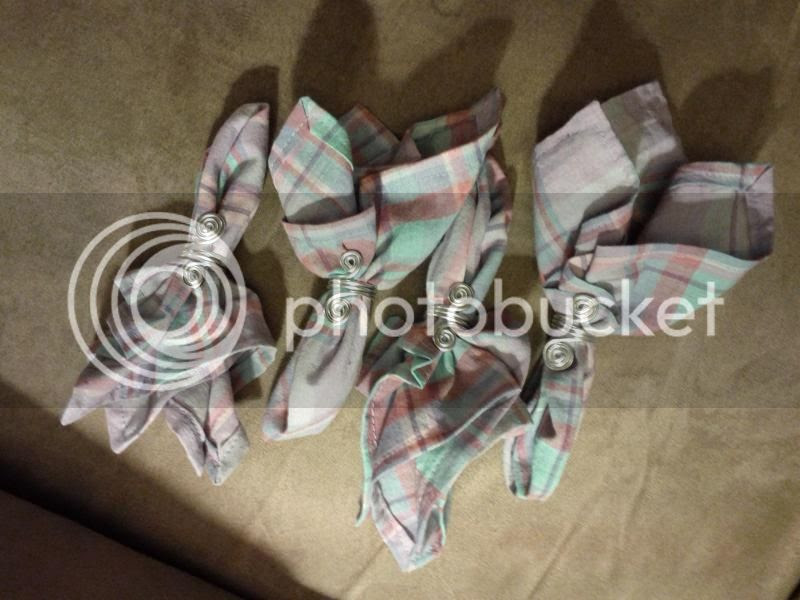 The final wedding of the season was Lynn's in October. It was a Nerdstravaganza! And I mean that in the most flattering way possible. The programs were set up like a fantasy story and illustrated by the groom, each table had their own nerdy location (we were sitting at Aperture Labs), and they had custom-made LEGO figurines as party favours. Here's mine: 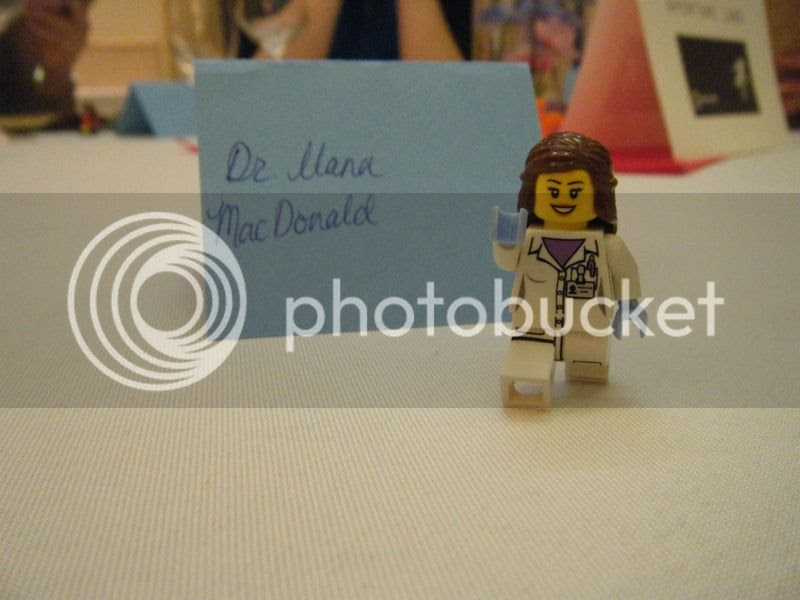 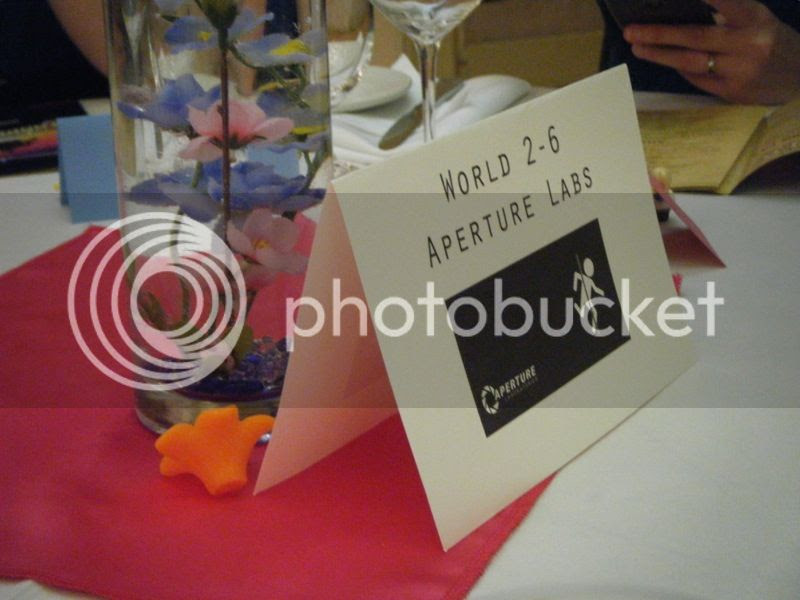 And, for good measure, the happy couple: 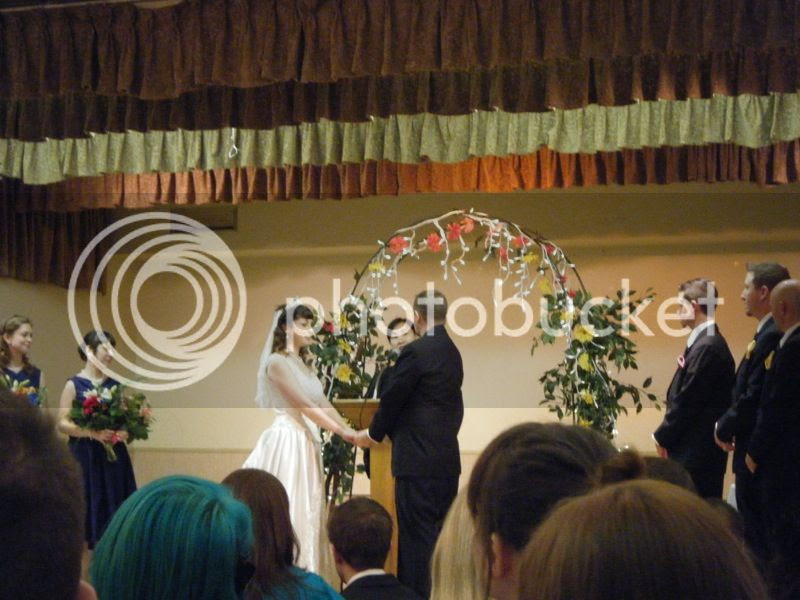 I made an appropriately nerdy gift as well, a Doctor Who trivet! 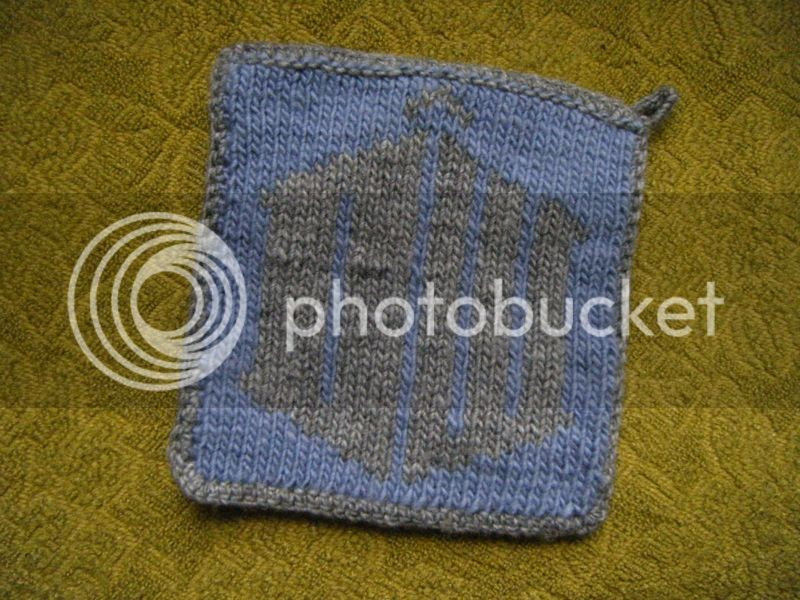 It was made with some of my Mom's leftover lopi, and I used the chart from tricksyknitter called Whovian.

Here's another recipe from the fitness blog. 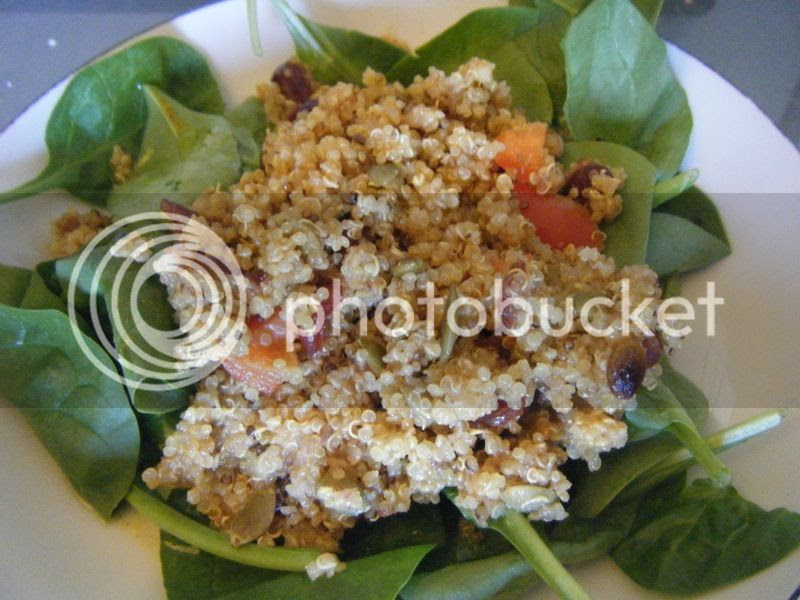 Quinoa is awesome. It's full of fibre and protein and it's absolutely delicious. Bonus: it's also easier to cook than brown rice. A friend of mine turned me back on to quinoa recently. I'd had it before as a kid, but I hadn't eaten it since I moved away from home, mostly because I hadn't realized how easy it was to make. So I've been making all kinds of quinoa salads lately.

I used this this recipe as a jumping off point, and it is by far my favourite quinoa dish so far. It's kind of like a pilaf, I guess. I changed the original recipe enough that I think it merits a retyping here (keep in mind a lot of it is copied and pasted from the original).

Ingredients (dressing):
(NOTE: This wasn't actually included in the original recipe, but some kind soul put it in the comments. It turned out that I didn't have any yogurt or any of the spices at the time, so I made do with what was in the pantry. Experimentation is fun!)

1. Toast quinoa in a dry skillet over medium heat, stirring often, until it becomes aromatic and begins to crackle, about 5 minutes. Transfer to a fine sieve and rinse thoroughly.
2. Heat oil in a medium saucepan over medium heat. Add garlic and cook, stirring constantly, until golden, about 1 minute. Add cranberries and the quinoa; continue cooking, stirring often, until the quinoa has dried out and turned light golden, 3 to 4 minutes. Add water and salt; bring to a boil. Reduce heat to medium-low and simmer, uncovered, until the quinoa is tender and the liquid is absorbed, 15 to 18 minutes.
3. Meanwhile, toast the pumpkin seeds in a dry skillet at medium heat, stirring often, for 2 to 3 minutes. Put them in a bowl to cool.
4. Also meanwhile, make dressing by mixing all the dressing ingredients together in a small bowl. Transfer the quinoa to a medium bowl and toss with half the dressing. Add in the pepper and pumpkin seeds. Let cool for 10 minutes.
5. Just before serving, toss spinach with the remaining 1/3 cup dressing in a large bowl. Divide the spinach among 4 plates. Mound the quinoa salad on the spinach and eat!