Ugh... Yes, I know the Knitter's Frolic was almost a month ago, but as mentioned in my last post, I've been a terrible blogger of late. Part of it can be attributed to two major public outreach events only a week apart, and the other part can be blamed on committee meetings, paper deadlines, and all that other graduate student stuff. Anyway, let's put that all aside and think about the fibery goodness from the Knitter's Frolic instead! 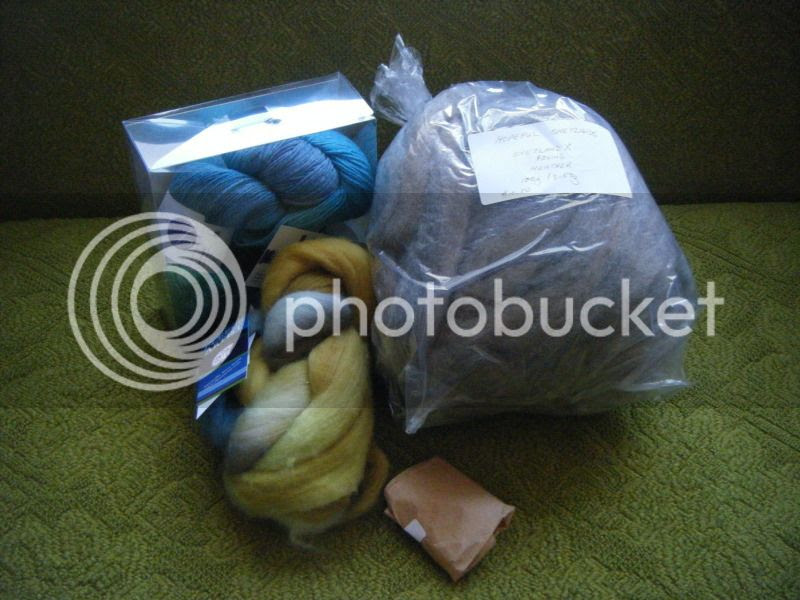 I was actually quite restrained when it came to buying things. I really wanted to get an ornate drop spindle from Gemini Fibres and to buy ALL THE CASHMERE from Roving Winds Farm, but I was a very very responsible shopper. 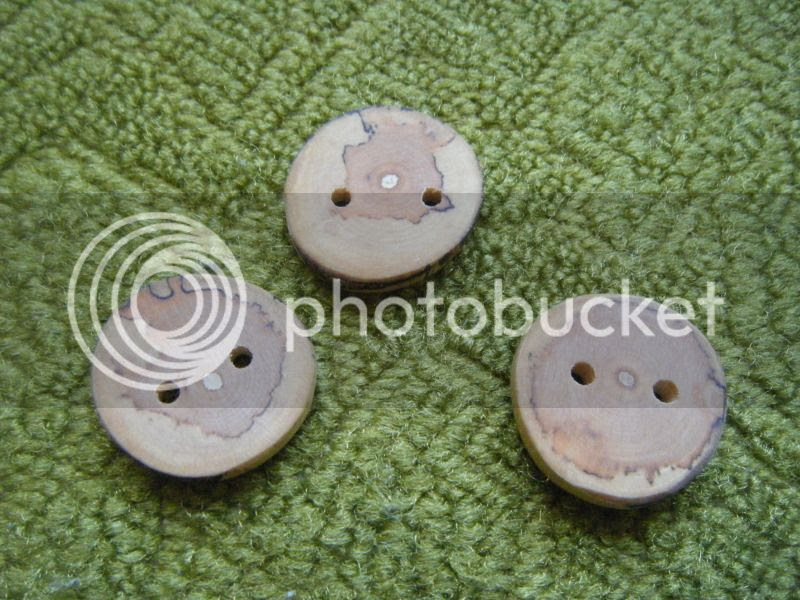 My first purchase was these gorgeous handmade buttons from the woodlot. I totally can't remember what kind of wood this is, but I just love the pattern that the wood grain gives. You should check out some of their other buttons in their Etsy shop... so pretty! 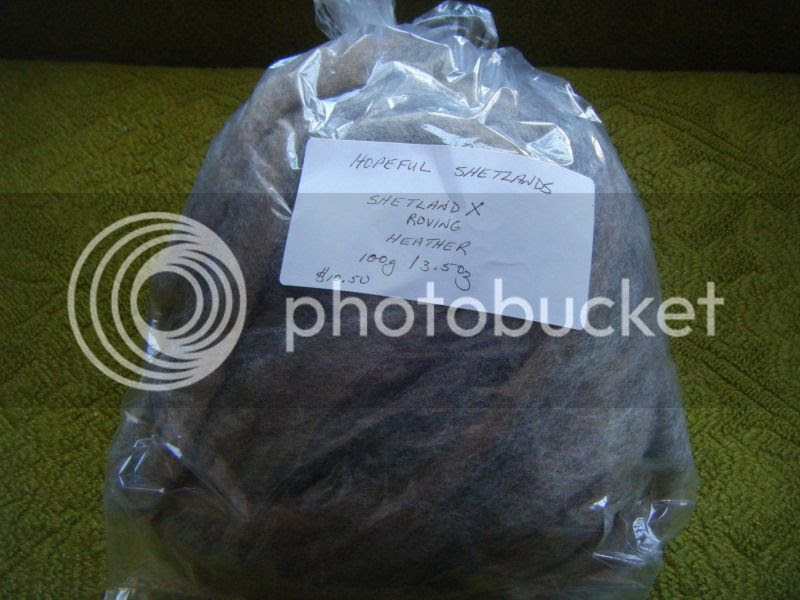 I also got a big fat bag of fibre from Hopeful Shetlands. The mix I got has a lot of lamb's wool in it, so it's veeeeeerrrrrryyyyyy soft. It was a pretty good deal too... 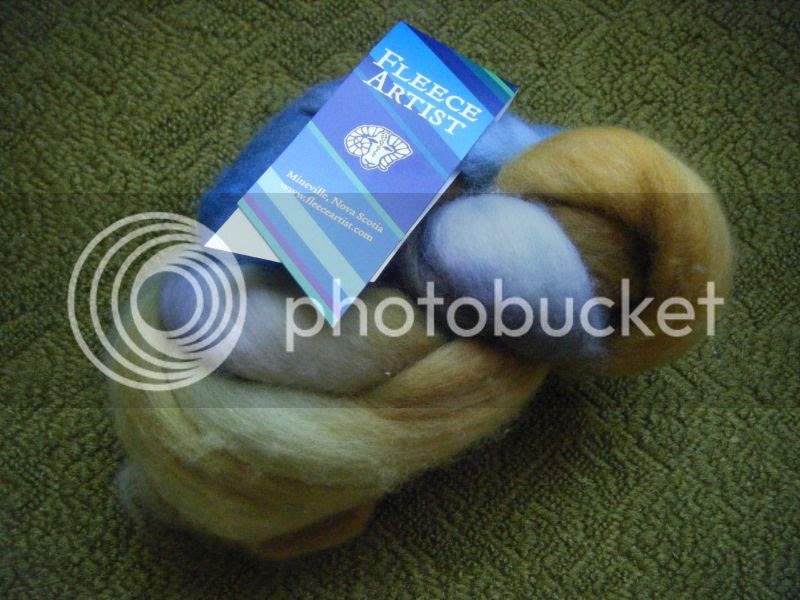 Speaking of fibre, I also got a Fleece Artist braid from the Rose Haven Farm Store. I just couldn't resist the colours. For some reason, my palette preference is moving more towards the greens and yellows, where I've always preferred blues and purples. At any rate, I have a lot of fibre to spin with... and I guess it's time for a fibre diet too, until I get around to spinning up what I have. 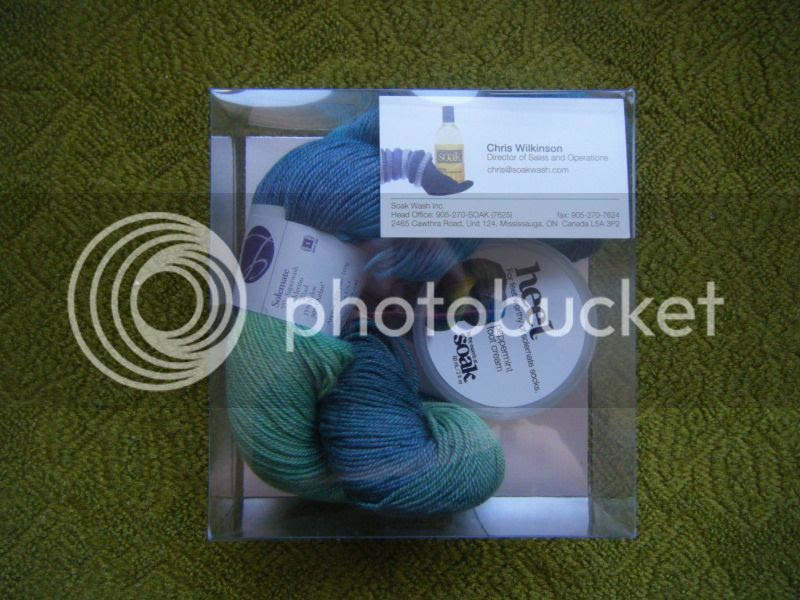 Finally, as an early birthday present (and it's my birthday tomorrow, so I get to open it!), my Mom bought me this delectable sock kit from the SOAK booth. It includes a jar of Peppermint Heel Foot Cream and a skein of Lorna's Laces Solemate sock yarn. It's so luxurious, I'm gonna have to find the perfect pattern for it... 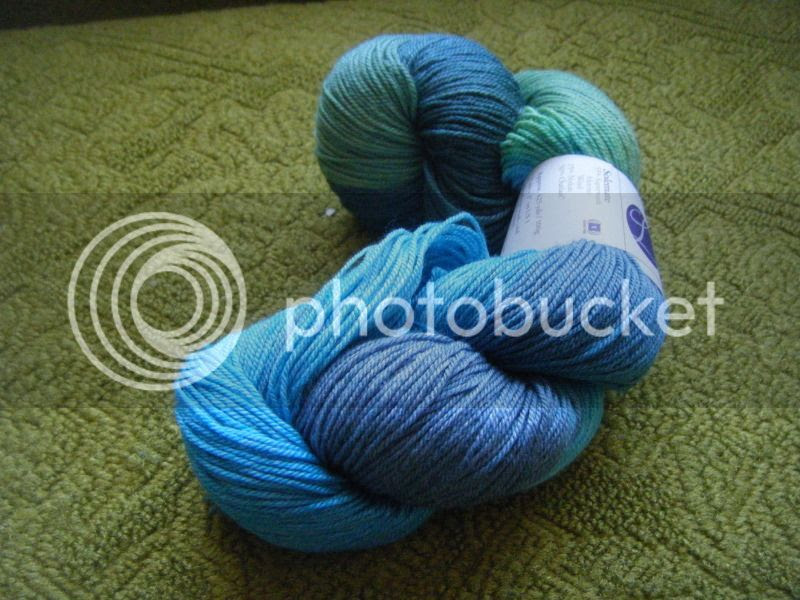 Other highlights included the Fleece Artist tasting booth, where we were allowed to knit with all sorts of crazy beautiful and luxurious yarns, and strange bacon and egg yarn (found on the internet here) and textured felted weirdness from The Black Lamb's booth: 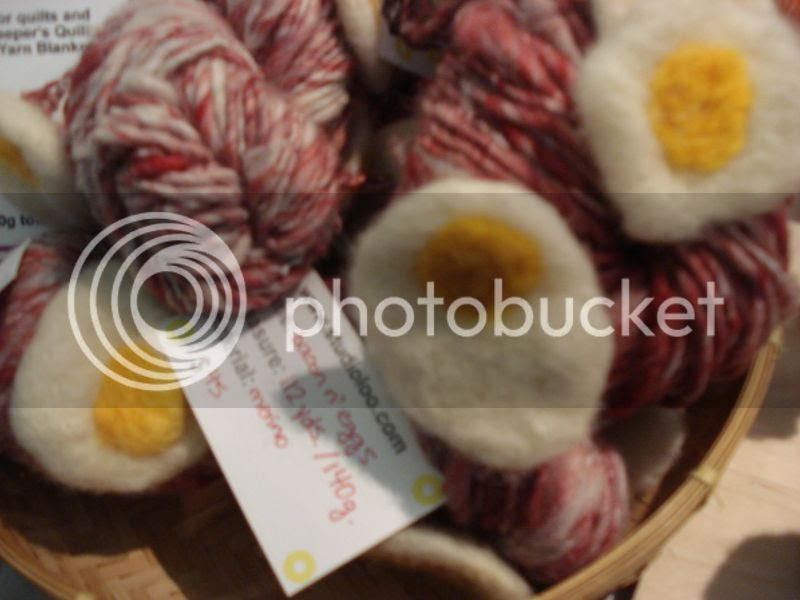 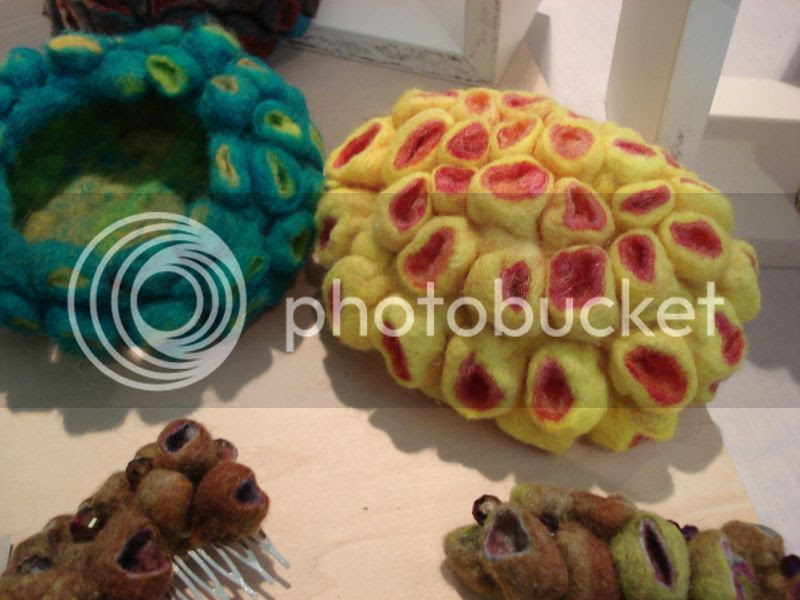 Man I'm a terrible blogger... Well, my buddy Erin over at Kniterly has forced me into writing something by tagging me in this game of Knit-tag. Apparently the idea is that I answer these questions and then tag someone else. Erin has already tagged all the blog friends I have who write about knitting, so I think I'll leave out that second part, but here's the first:

1. Are you always happy with your FO’s?

For the most part, yes. Since I joined Ravelry in early 2009, I think I've had maybe 2 or 3 projects that I really haven't been happy with, and even then, it was usually because I either made them too small or accidentally blocked them using an iron on an acrylic carpet (yes, I'm occasionally really stupid). For certain projects, such as my diatom shawl, my Cable Luxe sweater, and my Emma cardigan, I just looked at the finished project and admired my awesomeness as a knitter. Seriously.

2. Are you sometimes so disappointed that you frog everything and start a new project? Why? Color? Yarn? Making? Too small? Too large?

This does occasionally happen. My mother-in-common-law gave me some fluffy acrylic/mohair yarn recently, and the first project I made with it was this very pretty crocheted sweater, the Lush Cowl-Neck Sweater from Sweaterbabe. It had the potential to be really lovely, but even on gauge, and making the largest size, it was still way too small... 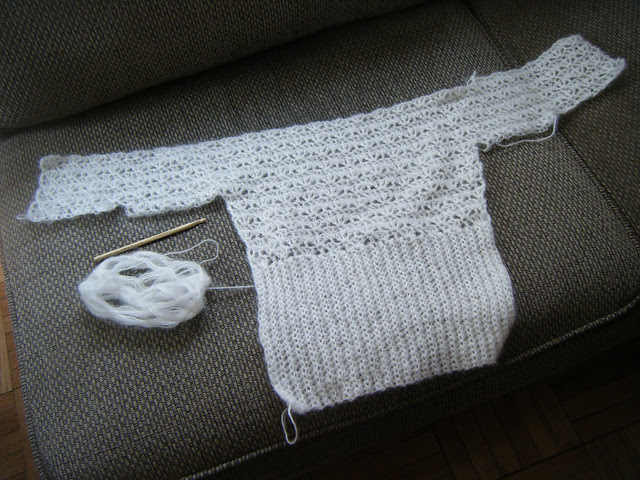 Well, I just ripped that sucker out, which was no easy task considering the fibre composition of the yarn. That's happened one or two other times, and mostly because of fit or the yarn just not working with the pattern.

3. Do you wear your knits or do they end up at the bottom of a cupboard? If so, why? How do they age after being washed and worn?

Hells yes! I wear my knitted things as much as possible. I'm trying to build up an entire sock drawer worth of knitted socks. I'll admit that there are one or two knitted things that have ended up at the bottom of the drawer, but for the most part, I'm happy with what I've made and I'll wear it. My socks have aged very well after several wearings. They tend to felt a bit on the sole, but that just makes them squishier. I usually machine-wash them on cold, and then dry them flat. As for sweaters, I wash them very rarely, and usually by hand. They've all stood the test of time pretty well. I should also note that I've been knitting for only 3 years, however, so "the test of time" doesn't mean all that much.

4. Do you always make a swatch? (maybe it should have been the first question, lol ?!)

I very rarely swatch. For garments where I'm not sure about the fit, I do sometimes, but as a rule, I just start knitting the thing, and if the gauge looks about right, then I keep going. If not, then it's frog time. No big deal. I often try to make garments that I can try on as I go, however, or that have instructions like "Knit until it's a certain length" or whatever. I actually swatch more often when I do crocheted garments because my gauge can be very variable in crochet.

5. Finally, would you rather work with some yarns you know well rather than others to avoid bad surprises?

I'm willing to work with almost any yarn. There are a few brands I come back to, but I'm not opposed to trying something new. I've never had a really bad surprise with any yarn. The one exception is that I will never knit with fun fur.

Alright, there you go, Erin!

By the way, if anyone was wondering which sweater I chose to start from the last post, I went with the Morning Dew sweater because of purely practical reasons. Also, I just happen to be using the yarn from the Cowl-Neck Sweater I mentioned above and frogged. I think I'll do the Lore Hoodie after that because it's just so pretty!

Alright, enough rambling from me. I promise I'll post some knitting goodness after I'm done my committee meeting and this upcoming Mike Brown lecture. Cheers!