The Day the Sky Fell

A couple of weeks ago, I felt a little like Chicken Little, except I was right, dammit! My story begins a little before that. It seems we've started to get a little bit of water damage in our ceiling, and in our bathroom, it got quite bad, as can be seen in the following picture: 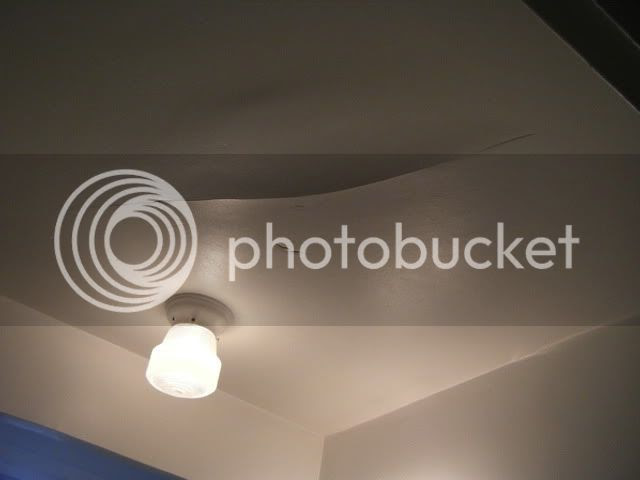 This crack was at least a meter across and coming down an inch from the ceiling. So, on this fateful Friday night two weeks or so ago, I was sitting in the living room, watching TV and knitting, the boyfriend out at a concert with some of his friends, when I hear a big crash from the direction of the bathroom. It was quite a windy night, so I thought maybe the wind had blown something off the windowsill, so I check the bedroom and the computer room and then the bathroom last, since we didn't have anything on the bathroom windowsill except shampoo bottles, and they don't exactly shatter when they fall. So, I looked in the bathroom and encountered this: 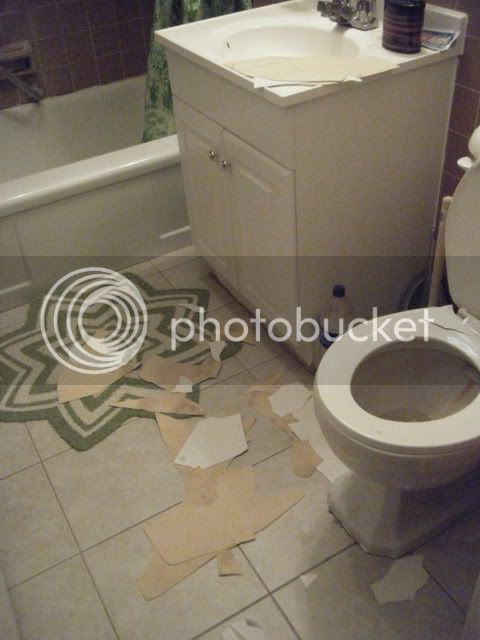 These huge flakes of paint were all over the floor. And I can only imagine that that ceiling must have been painted over dozens and dozens of times because they were several millimeters thick. 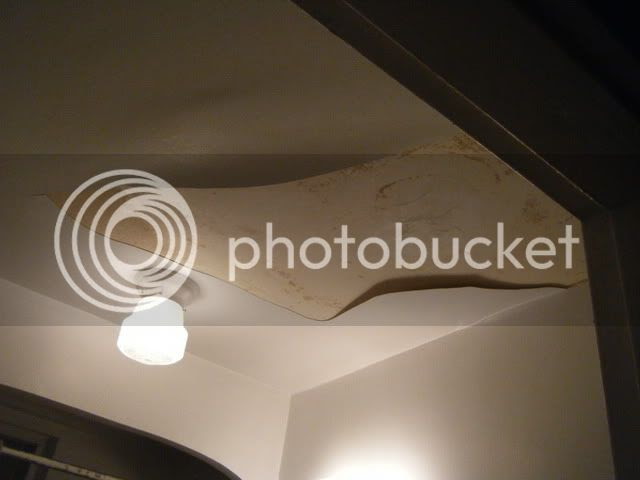 Early the next morning, I heard another crash, and more of the ceiling had fallen off with a large piece hanging over the door that subsequently fell on my head when I tried closing said door. Ceiling paint is sharp. Anyway, it's all cleaned up now, and looks like it won't fall down anymore (though there's not much paint left on our ceiling to fall down). We just have to get some sort of work order filled out so we can get the damn thing fixed.
Posted by Unknown on 4/26/2010 05:12:00 AM 6 comments 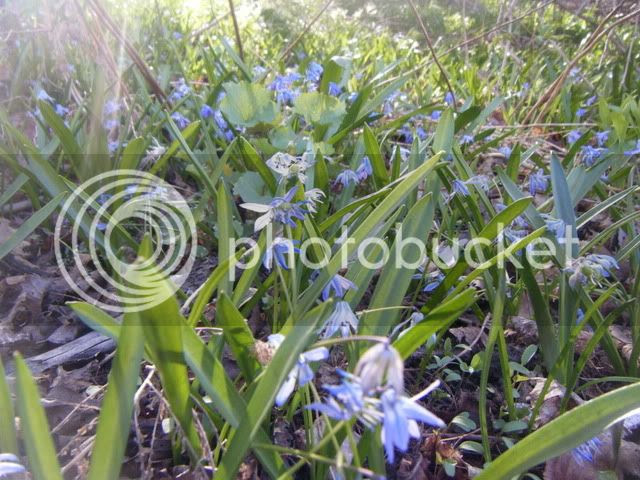 A defiant spread of crocuses, jagged,
Noble, everywhere in interstices
Of soil between rocks, showed,
Indifferent -- oh, indifferent. Whether
Prophecy had god, had doom in it
To come, they exulted, white,
Purple, stamens gold, six petals,
Unknown except you bend down to it.
But colour far, near, some yellow,
Out of the debris of April roots,
And marks and tendrils left in the snow gone.
Nobility was there to see, never
Mind resurrection, beauty
Was here.
_______A path of landscape,
An acre.
_______I gazed.
You looked again and to the right, behind,
A bunch of crocuses grew there.

Note: I don't think those flowers are actually crocuses, but ever since the little flowers have started poking their heads through the grass, I've had this poem in my head. Ralph Gustafson lived near my hometown until he didn't live anymore, and my dad set a lot of his poetry to music, and I've been humming the tune to this one over and over...
Posted by Unknown on 4/22/2010 07:08:00 PM 3 comments

Despite my scholarly attitudes, I don't really read all that much for pleasure. I have a craft library of a dozen books, a few of which I've actually read cover to cover, but considering my obsession with things yarny, it doesn't seem like that much. It definitely doesn’t give me an honorary librarian degree. I know if I had a subscription to any sort of crafting magazine, most of the articles would go unread, and I'd likely have a backlog of magazines to read (such as with our WIRED subscription right now). I need not even mention my to-read pile of books I received as gifts that I really should get around to picking up. I haven't bought a pleasure-reading book for myself in years.

Thus, it was totally unnecessary for me to buy the special Piecework issue called "Knitting Traditions" from Interweave. But you know... it was 43 patterns for $20, all of which are socks, lace or baby items, items I'm currently slightly obsessed with. And we all know how I feel about vintage and complex patterns. (Well, if you don't, suffice it to say I'm drawn to them.) 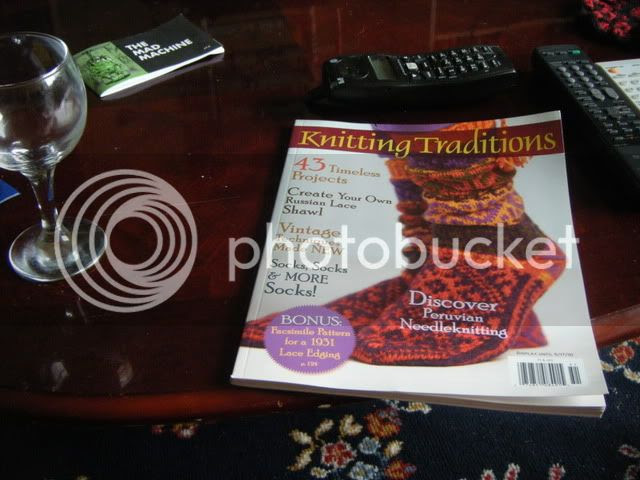 I actually have read this publication from cover to cover, and it only took me a month or so to get through it! Seriously... Anyway, all the projects are really nice. There are a few I would probably never make, and a few I would think about making if I didn't have a ridiculously long list of projects in my queue. However, there are also a lot of projects I definitely want to try. I'll go through these briefly.

In the sock department, it was mostly techniques that impressed me. The "Floral-Motif Bulgarian Socks" by Priscilla Gibson-Roberts are based on a traditional Bulgarian design (duh), and incorporate a really interesting method of incorporating colourwork while knitting in the round. It involves slipping stitches and going back with the background colour... something I'll actually have to try to fully understand, I think. I don't know if I'll ever make this exact pair of socks, but I'll definitely keep the technique in mind if I want to do colourwork in the round. 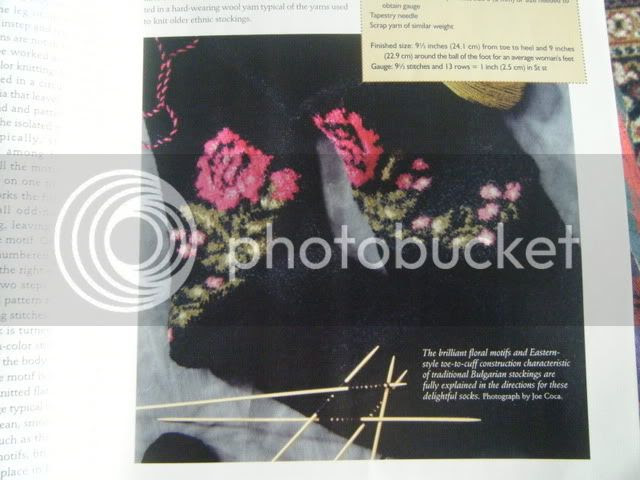 The next sock technique that really impressed me was the method for knitting two socks at a time one inside the other on double-pointed needles using a double-knitting technique by Jacqueline Fee. This is not something new to me, since I discovered it when I was first learning about double-knitting in this Knitty article by Kory Stamper. I think I actually prefer the Knitty article because it shows you how to cast on two at a time while the Knitting Traditions article suggests knitting the ribbing separately. It's still nice to have the article in print with pretty pictures and everything. 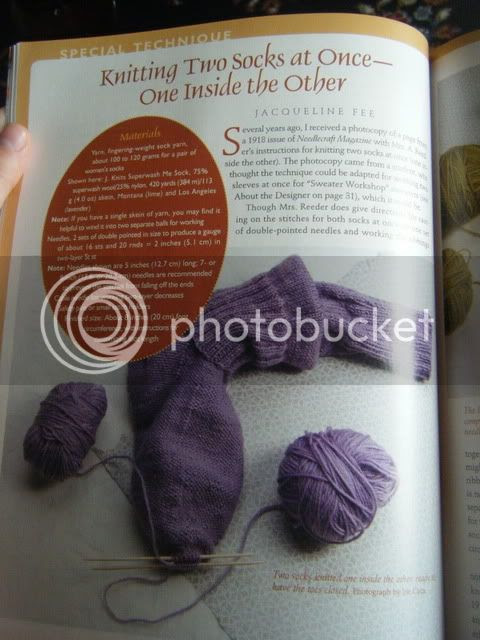 All the baby items are gorgeous, but I can't see myself actually trying any of the patterns because babies grow so fast and I don't believe in putting so much work into something that will only be worn for a few months. There are also quite a few glove and sweater patterns that look nice. I can see one or two I would think about making, but for the most part, they're just pretty to look at on the page. The lace patterns, on the other hand, are pretty damn droolerific. I can totally see myself making this: 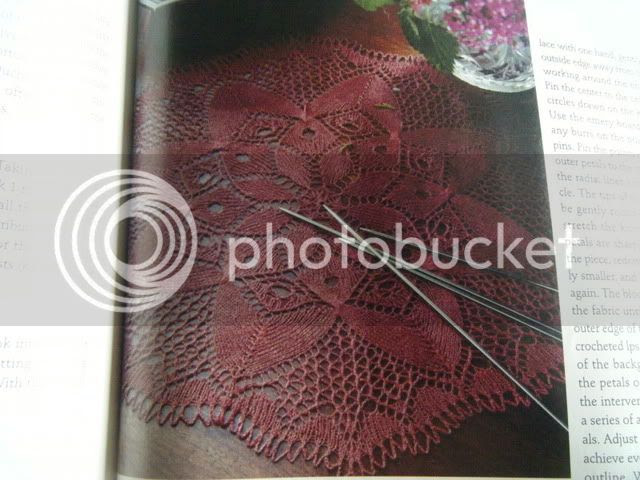 It's "A Christine Duchrow Lace Centerpiece" adapted by Charlene Schurch. It's just so complex and pretty and uses thread with 1.5 mm needles... oh heaven! I would consider making this as a blanket in a thicker yarn with larger needles, but there's something about the ornateness and uselessness of doilies that really appeals to me. There are also a considerable amount of lace edgings, but I think I'll probably also try these squares by Mary Walker Phillips... maybe make a baby blanket out of them. I especially like the leafy pattern. 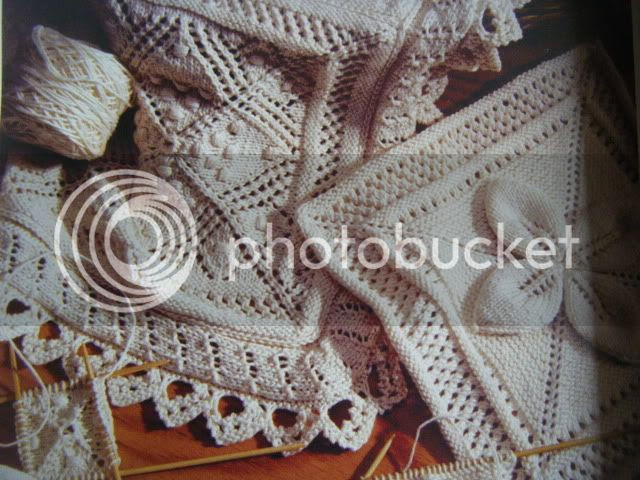 Anyway, that's all for my adventures in magazine land. I'm seriously considering getting a subscription to Piecework because I enjoyed this one so much, but I probably won't for the afore-mentioned reasons. Ah well...
Posted by Unknown on 4/21/2010 06:00:00 AM 0 comments

A couple of FOs

Hello internet... I've been a terrible blogger, I know. Suffice it to say that I've been busy and/or uninspired. Even now, I won't be writing about what I had planned, which was to talk about my crazy bathroom disaster, and to show off my pretty new magazine. Alas, these will have to wait until I'm at home, and not procrastinating at school where all my pretty pictures aren't. Instead, I'll write about a couple of finished objects (FOs)...

First off, an object of wonder and awe... 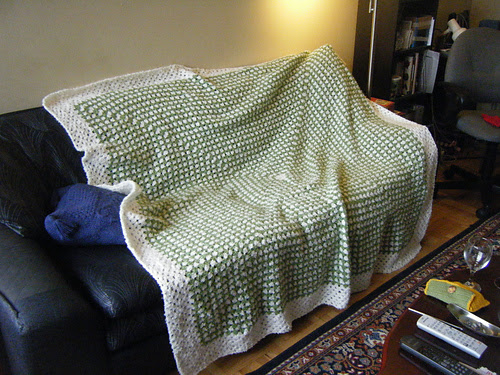 If you just said to yourself, "Holy shit! That bitch is crazy!" I totally don't blame you. Yes, this is a giant granny square with a gazillion rounds. I used up the rest of the fluffy white and green stuff and pretty much kept crocheting until I ran out. I ran out of green long before I ran out of white, but I like how that border looks. 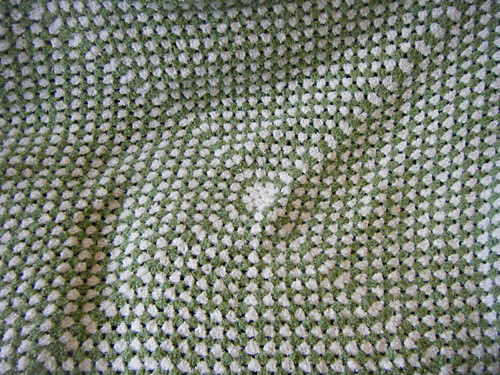 It's a very cozy blanket, and surprisingly soft and light for something made out of acrylic (I think). Mostly, I'm just glad to be rid of those giant rolls! 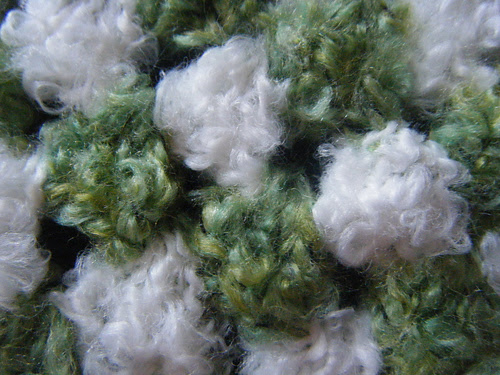 The second recently-completed project is this adorable little tote bag, made from Estelle Young Touch, a sport-weight mercerised cotton. This yarn is very slippery and splits easily, and it was difficult to find a pattern that it would work with. Turns out the Elisa's Nest Tote fit the bill. 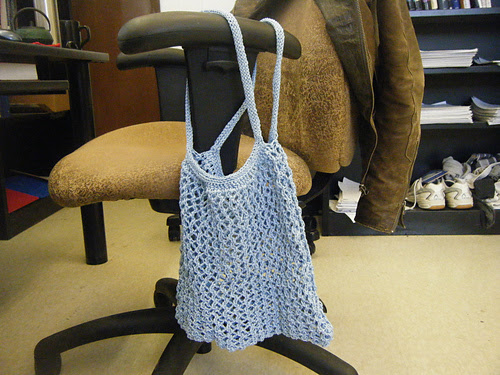 The only modification I made to this pattern was to do a row of double-crochet around the opening of the bag before putting the handles on. The cast-on and bind-off edges were definitely of different sizes (because I bound off too tightly, I think), and so I wanted to even it up a little. Here's a WIP shot: 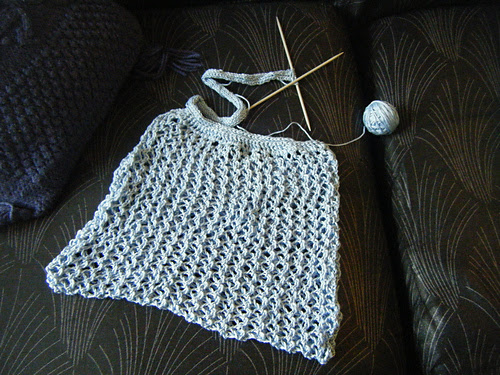 My favourite part of the pattern was definitely those applied I-cord handles. Such a cool technique, and such a pretty finished product! I wasn't extremely happy with this project until I put those handles on. And the fact that I badly twisted one of the I-cords before sewing it up doesn't really bother me so much. However, if I were to make this again, I'd probably do a crocheted base and then knit in the round for the body of the bag. Seaming sucks. 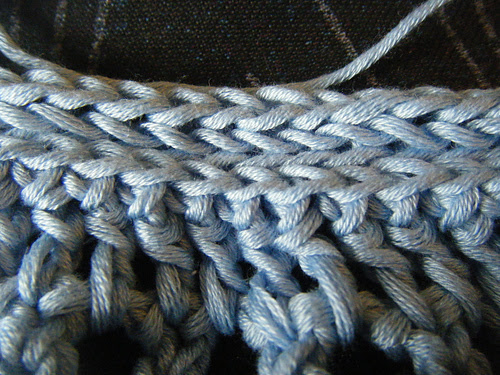