So do black holes exist or not?

The internet has been all aflutter this past couple of weeks with the news that black holes have supposedly been mathematically proven not to exist. The trouble all started earlier this year when Stephen Hawking declared that the existence of an event horizon, the region around a black hole past which even light cannot escape, is incompatible with quantum mechanics. (You can read the original paper here if you feel you can handle the jargon.) Now, physicist Laura Mersini-Houghton, in a recent paper (not yet peer-reviewed) is claiming that black holes would not be able to form when dying stars collapse, which is the primary mechanism astronomers use to explain the existence of stellar mass black holes (those that are a few times more massive than the sun). 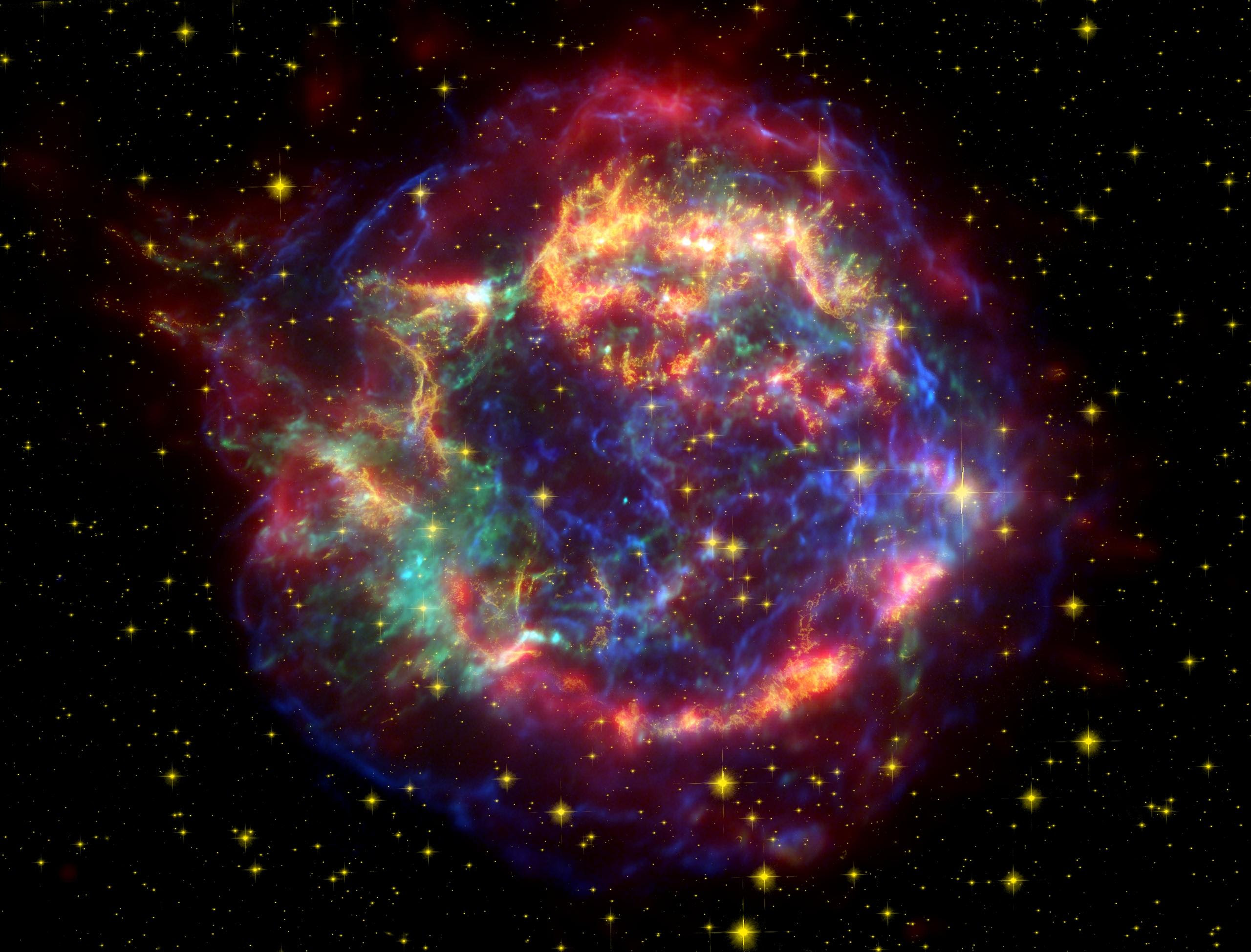 By Oliver Krause (Steward Observatory) George H. Rieke (Steward Observatory) Stephan M. Birkmann (Max-Planck-Institut fur Astronomie) Emeric Le Floc'h (Steward Observatory) Karl D. Gordon (Steward Observatory) Eiichi Egami (Steward Observatory) John Bieging (Steward Observatory) John P. Hughes (Rutgers University) Erick Young (Steward Observatory) Joannah L. Hinz (Steward Observatory) Sascha P. Quanz (Max-Planck-Institut fur Astronomie) Dean C. Hines (Space Science Institute) [Public domain], via Wikimedia Commons
Our current theory of stellar mass black hole formation is that these objects are created when a star goes supernova due to the collapse of its core. When a star is about 8 times more massive than our Sun, it is able to fuse heavier and heavier elements, working its way along the periodic table, until it starts producing iron. The problem with iron fusion is that it's an endothermic reaction, taking in energy, instead of an exothermic reaction, giving off energy, such as when the fusion of lighter elements occurs. Thus, the outward pressure coming from fusion reactions that would counteract gravitational collapse is no longer present. When enough iron builds up in the core, it collapses in on itself either into a neutron star, or, if the original star was at least 20 times as massive as the sun, a black hole. The outer layers of the star would then collapse inward as well, having nowhere to go, and reach a critical temperature which would cause them to explode outward as an extremely energetic supernova. (PhD Comics made a nice video explaining this.) The image you see above is of Cassiopeia A, the remnant of a supernova which was thought to produce a black hole.

The basic idea of this new paper comes from Stephen Hawking's calculation in the 1970s that showed that black holes should emit thermal radiation (called hawking radiation). Essentially, quantum fluctuations in a vacuum might sometimes produce a pair of particles. If this happens near the event horizon of a black hole, due to the gravitational energy of the singularity, one of the particles will fall in, and the other will escape, causing the black hole to lose energy, and therefore mass. Mersini-Houghton claims that the amount of hawking radiation produced during the collapse of a massive star's core is so much that the black hole would never be able to form. Essentially, the black hole would evaporate away before it got a chance to come into being, and this would mean that stellar mass black holes can't form.

Bob Novella of the Skeptic's Guide to the Universe does a pretty good job of deconstructing why this research might not make that much sense in reality (see part 1, and part 2). The first, most obvious counter-argument is that we do, in fact, observe evidence of stellar mass black holes in our galaxy. Many of these are in what we call X-ray compact binary systems, where a black hole is in a binary system with a star from which it is cannibalizing material. The material falling in towards the black hole releases so much energy that it is seen to radiate in the X-ray spectrum of light. The second argument is that many physicists who specialize in black holes are skeptical (to put it mildly) about the results of this paper, including Bill Unruh who has proclaimed that this paper is "nonsense".

Now, I will admit that I have a small personal investment in this topic in that my thesis supervisor, Harald Pfeiffer, is the second author on Mersini-Houghton's paper. He is an expert numerical relativist and I have no doubt that his numerics are sound. The problem is most likely the assumptions made prior to any numerical simulation. At any rate, the topic of my doctoral thesis (which I might write about someday) depends on the existence of stellar mass black holes, so I certainly hope that they're wrong in this case!

One final point I'd like to make is that although this paper claims that the mechanism for producing stellar mass black holes would not work, it says nothing about the formation of other types of black holes, that is, supermassive and intermediate-mass black holes. Both of these have been found to exist, the former in the core of almost every galaxy, and the latter at the centre of globular clusters. In particular, there is ample evidence that supermassive black holes exist, especially from the observation of the movement of stars at the centre of our own galaxy. It's exceedingly irresponsible for popular science articles to claim that this research shows that any type of black hole can't exist. And so, the short answer to the question posed in the title of this post: "Yes, they probably do."