And they called me crazy...

Over the last week or so, we've had absolutely gorgeous weather... Like, sunny, go-outside-in-a-tshirt gorgeous. And then yesterday, it snowed. Just a little bit, but enough to tell us that summer hasn't actually arrived. And what does this have to do with my mental state, you ask?

I just finished knitting a neckwarmer from that gorgeous yarn I picked up at the Creativ Festival last fall. Of course, everyone was all like, "Why are you making a super warm and amazingly soft neckwarmer when winter's already over?" And I was all like, "Oh, you'll see!" And of course, winter came back. So there... not crazy.

Anyway, my new gorgeous neckwarmer is amazingly warm and soft, and it cuts the wind like nothing else. Just having this little piece of fabric around my neck has made the difference between me being a shivering mess and toasty warm. Alpaca, in case I had any remaining doubts in my mind, is definitely my favourite fiber. Or at least merino, alpaca and silk blends... Here are the pics! 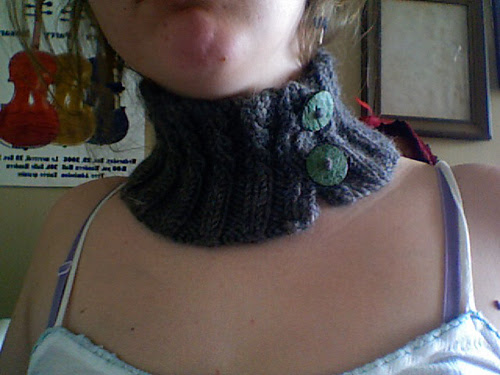 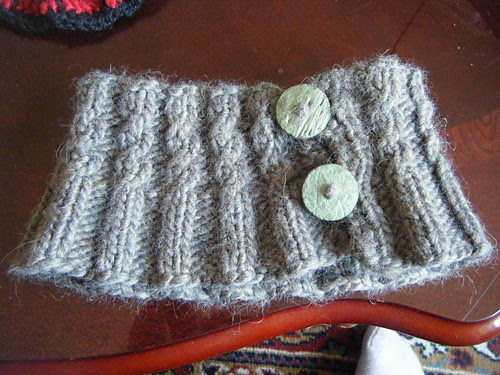 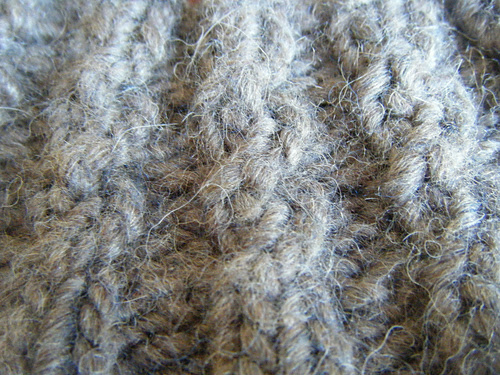 Aw yeah... just look at the fuzziness! You don't even notice the spot where I accidentally cut the fabric after removing a button when I realized it was on the wrong side... I mean... what mistake? (Ouf, talk about heart attack and a half!)

Currently on the needles is something equally unseasonable, a wool cabled sweater. This thing has been in my queue forever... and I've had the yarn from before I got my swift, in fact, I think it was last August! And since I bought that yarn specifically for this project... that's a long time for it to be in my queue. Right. So, the pattern is the Cable Luxe tunic by Lion Brand. I'm more than half done the yoke cable, and then I've just got to knit the rest of the sweater... Here's a detail of the cable pattern: 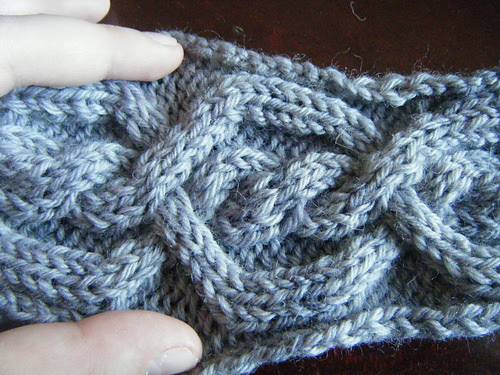 Ain't it perdy? I made a mistake in the first pattern repeat, and of course didn't notice it until I was finished the second pattern repeat, but I think I'll leave it there since the thing is seamed in the back. I think I'll also work the body and sleeves in the round instead of flat because I really really don't like seaming. Shouldn't be too hard to figure out...
Posted by Unknown on 3/21/2010 07:49:00 PM 5 comments

This weekend, which will include Monday just because I didn't get any work done yesterday, was awesome. A few friends were visiting from Ottawa to see a Muse concert, and as a result, there was much partying. Besides the necessary boozage, there were a few interesting items of note, namely a walking tour of the seedy parts of Toronto, a lecture by the author of one of my favourite web comic artists, and a drawing session with a pretty belly dancer. Ok, the last two had nothing to do with my friends from Ottawa visiting, but bear with me.

First of all, the walking tour. Of the group of friends who were visiting, there was only one female, and we shall call her L. L didn't want to walk around aimlessly all day on Sunday and so picked up the NOW magazine and discovered a teeny tiny add for a walking tour entitled "Blind Pigs & Card Sharks". It was led by a novelist named Lisa Pasold, who spent a lot of time promoting her book, but who was otherwise an excellent tour guide. We started at Union station, where we learned it was built in 1922, but not opened for five years after that because they had to reroute the train tracks. We then went through the Royal York Hotel, which is absolutely gorgeous, and learned that it opened right before the stock market crash of 1929, but was still a place of absolute luxury and class.

We then walked along Front street until just passed Yonge, passed the Hockey Hall of Fame and through Berczy Park, then up Church street to King. On the way, we learned all about the more disreputable life in Toronto in the 1920s to 1940s, about prohibition, the gambling, and the poor neighbourhoods. We then went back up Yonge towards Queen and passed by the King Edward Hotel and through Cloud Gardens Park, which was probably my favourite part of the tour. I'll have to go back there for a picnic. The tour ended at Old City Hall. Overall, the tour was really fun... I'd love to do that sort of thing again.

The next exiting event was a lecture by the author of PhD Comics, Jorge Cham. It was quite entertaining, but a lot of it might have been because the audience, which was 99% grad students, was so ready to laugh. The comic is about the lives of a few engineering grad students, with a token Humanities student. It's all about free food, being terrified of one's supervisor, the "graph"... for the most part I can really relate. Jorge's talk was mostly about how Procrastination is a natural mechanism for grad students to cope with the stress of being in grad school and all the expectations that come from that. It was a good time.

Finally, last night, I dusted off my sketchbook and went to a Dr. Sketchy session at Cameron House. And by "dusted off my sketchbook" I mean that my last drawing was done in July, 2008, and the last one before that was done in September, 2005. Anyway, I went with my friend Jori, who is a much better artist than I. The lovely Samara was modeling, and though she was pretty good at it for her first time, I found her poses to be a little uninteresting. I think she made up for it with her gorgeous belly-dancing costumes. To finish off, here are a few of my sketches: 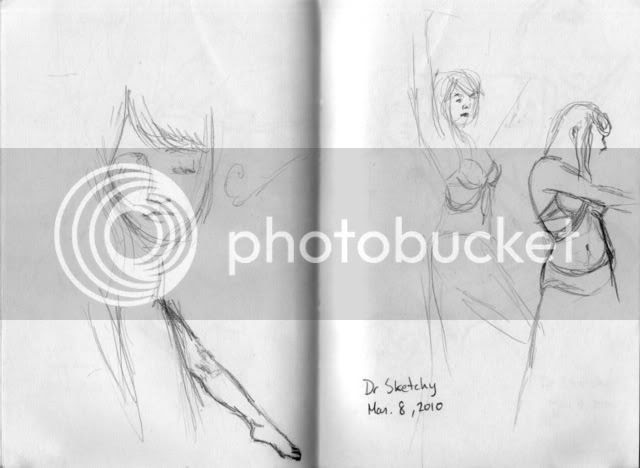 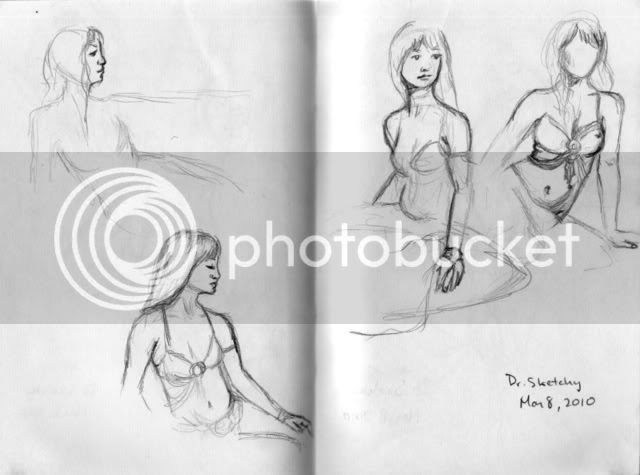 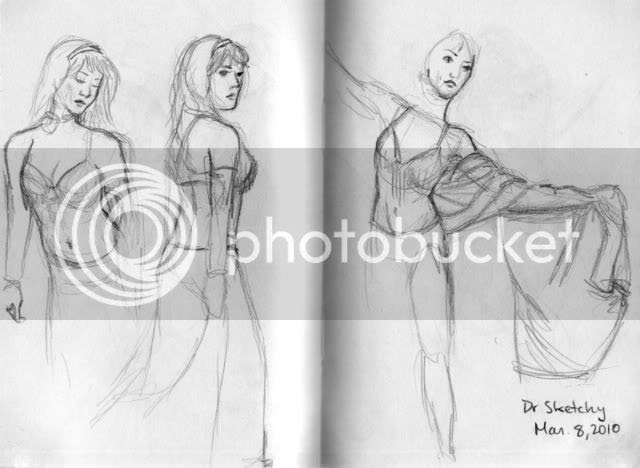 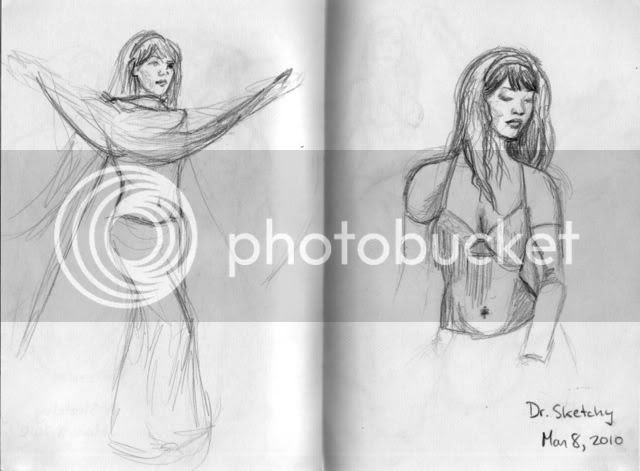 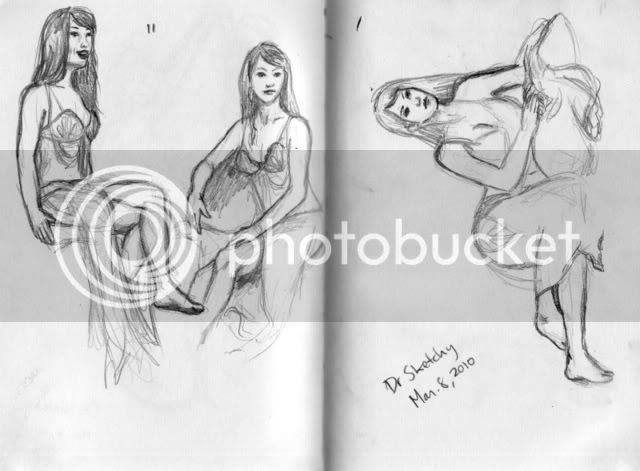