The Creativ Festival and my incredible desire to become an alpaca farmer...

Because really, who could resist this face! 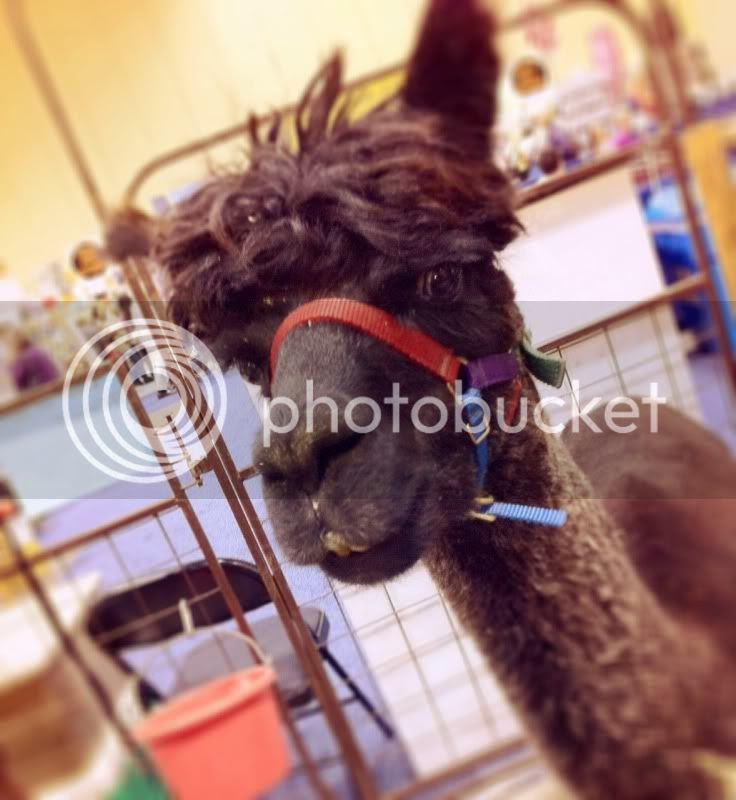 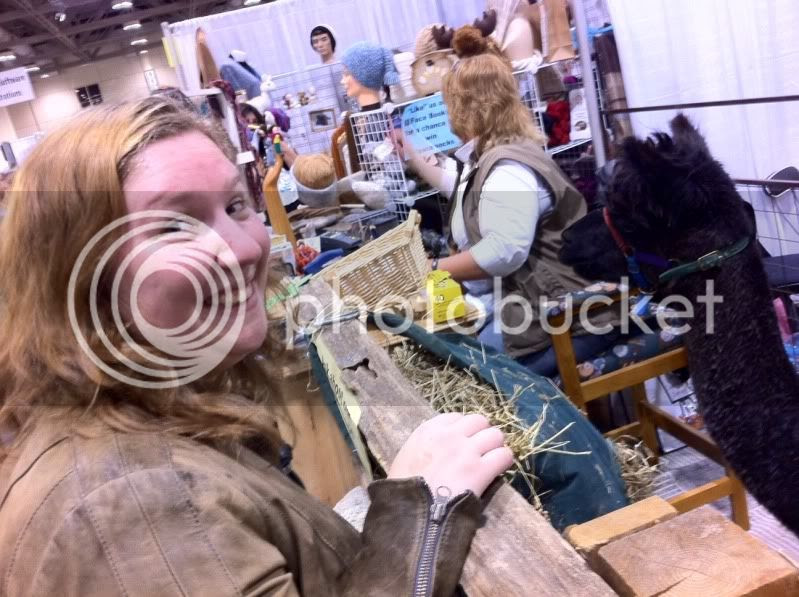 Photo courtesy the Happy Seamstress.
Right, so Ozzie (a.k.a. the best alpaca ever) was one of the features at the Creativ Festival, which I just happened to go to this past Saturday with my friends Joanna and Lisa. I didn't go absolutely nuts on the purchases, which is sometimes a problem when presented with so much crafty awesomeness, but I attribute that mostly to having taken a Steampunk Wire-wrapping Jewelry class with June Beach in which I created this crazy thing: 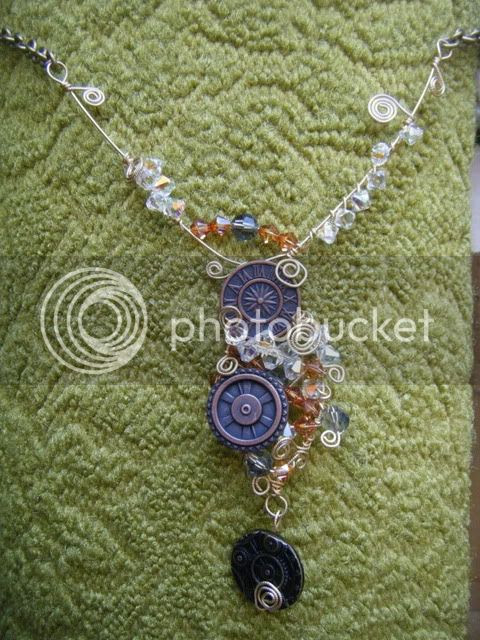 My favourite part is the dangly steampunk button at the bottom. I must admit, however, that my wallet didn't escape the festival completely unscathed. I splurged on this gorgeous sparkly and super soft baby alpaca yarn: 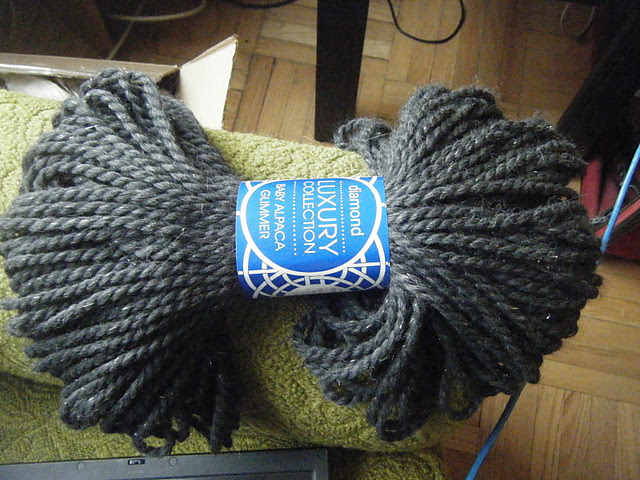 I also picked up this absolutely gorgeous hand-carved shawl pin: 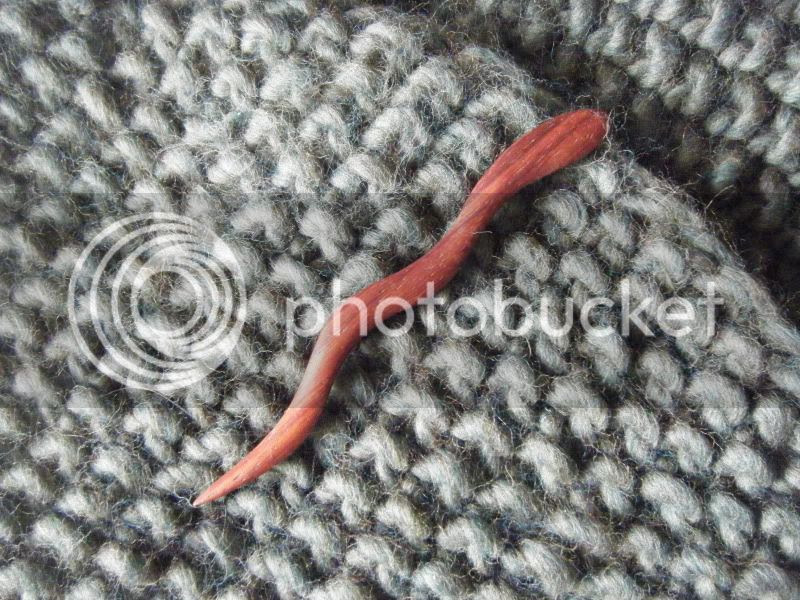 One booth was selling used crafting books (at least I think they were used) for very reasonable prices. I got Nicky Epstein's Knitting on the Edge for a mere $10. 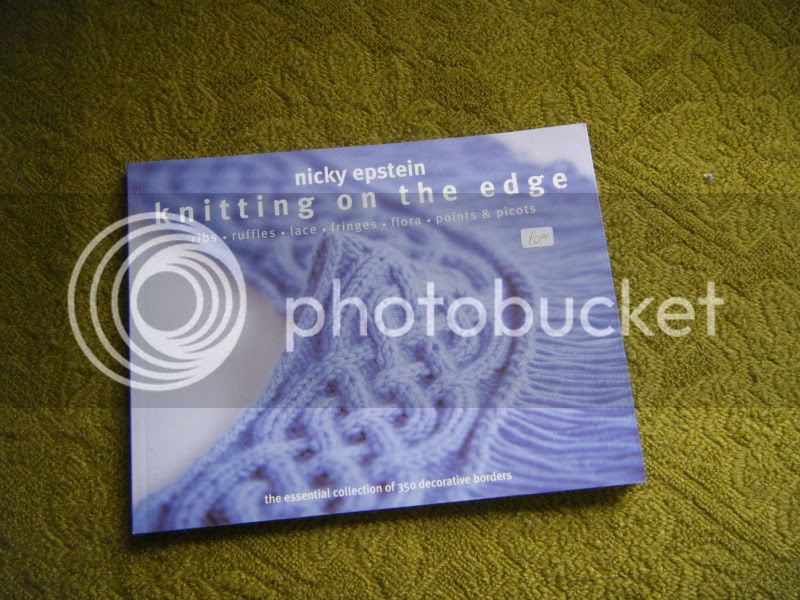 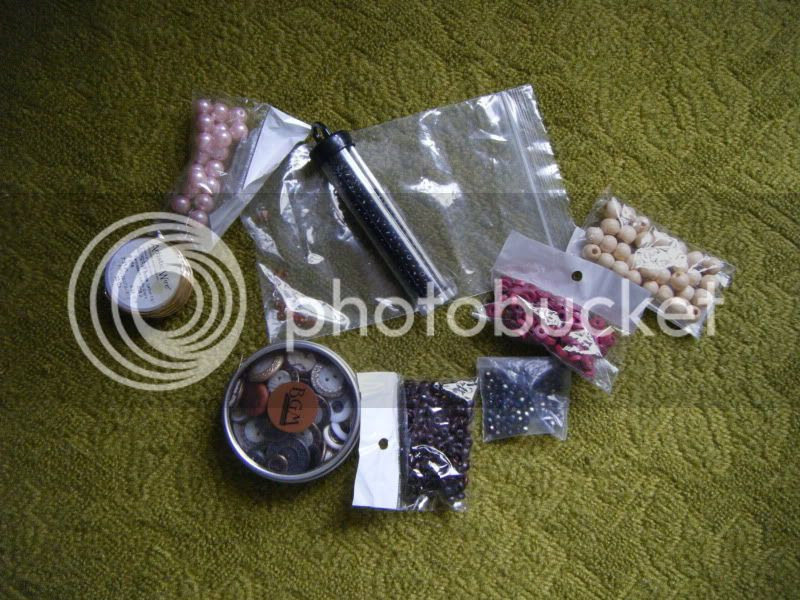 The best find of the day was this tin of buttons I got for $5 filled with these really cool vintage-style buttons, none of which I disliked (and you all know how rare that is when you have a random assortment of anything). 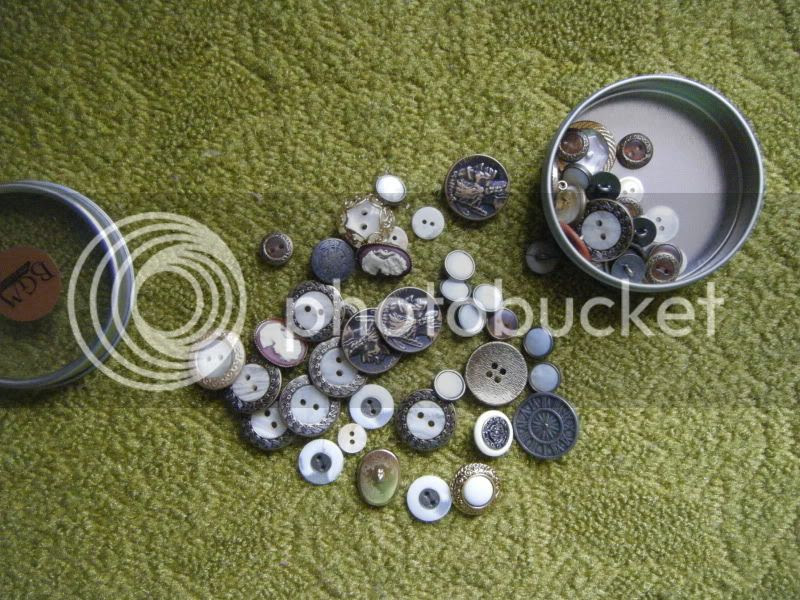 I really love those cameo ones... 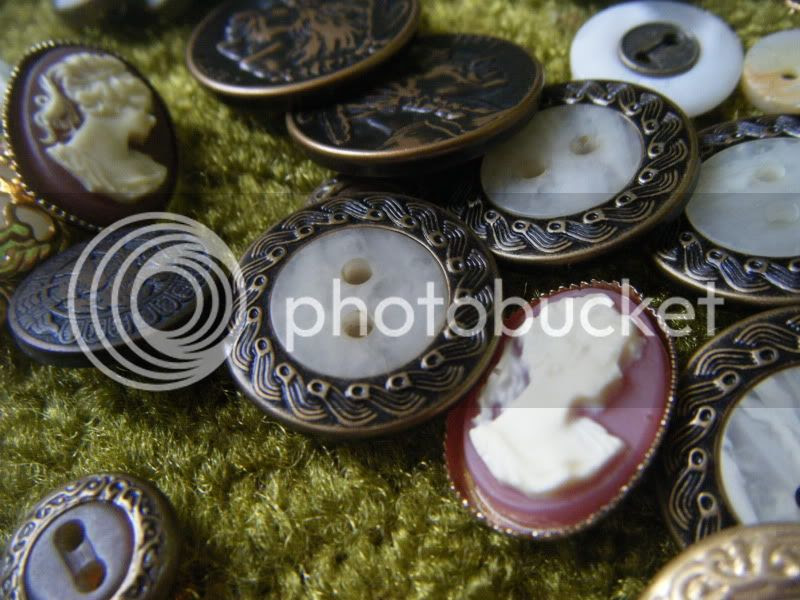 Crashing Comets into the Sun

Here's a neat little tidbit: a video off NASA's Astronomy Picture of the Day (APOD) showing a comet crashing into the Sun (or at least approaching it very closely and probably disintegrating) and the coronal mass ejection that follows...


Now, these two events are likely unrelated because comets are so small compared to the sun that they shouldn't have any effect on solar activity, so it's likely just a coincidence that these events occurred together. As Phil Plait from Bad Astronomy explains, the Sun is fairly active right now, with these coronal mass ejections happening all the time. It's also fairly common to see this special class of comets called "sungrazers" go very close to the Sun, sometimes crashing into it. So, if you have two events that are fairly common, chances are that eventually they'll happen at the same time.

Oh, and in case you were thinking that maybe we've finally seen real evidence of alien life, that flying saucer thing in the background is actually the planet Mercury... so no need to worry. You can read more about this event on the SOHO (SOlar and Heliospheric Observatory) website or on the Sungrazing Comets blog.
Posted by Unknown on 10/21/2011 11:31:00 AM 0 comments

Playing with wire (or One Down, Three To Go)

This here is my newest toy: 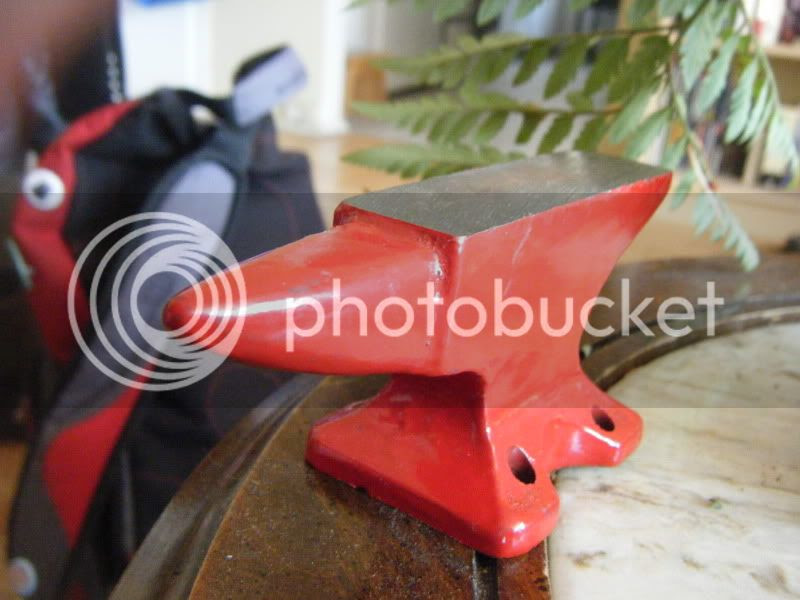 And this here is my newest obsession, the result of which is the first completed project from my Pay-It-Forward venture: 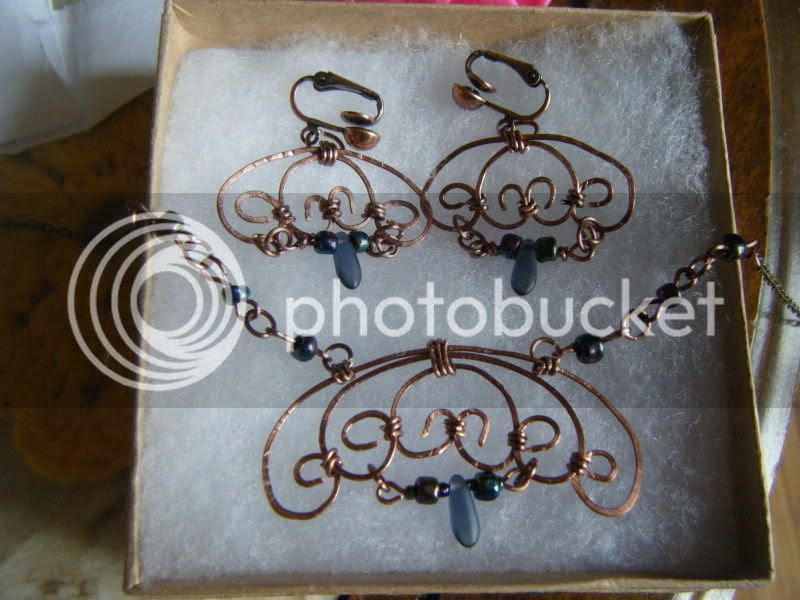 That's right, I've picked up yet another craft: hammered wire jewelry. I've done a fair bit of jewelry-making in the past (see here for some examples), but most of it has simply involved putting different elements together into an interesting completed object, not necessarily creating the elements that go into the finished project. The above is my first attempt at doing a bit of the latter, by bending wire into cool shapes and hammering it flat so it holds the cool shapes. I must admit that I was greatly influenced by some of the amazing artists on Etsy, especially Nicholas and Felice, who make the best ever shawl pins.

I started off my adventure with some simple sketching. I had the idea for the earrings first, and then I went on to make the necklace. 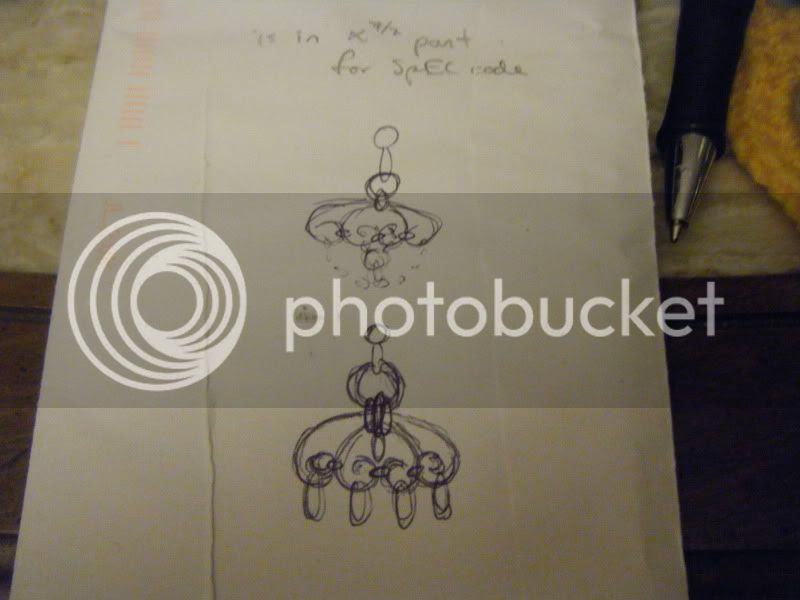 I learned a lot during the process of bending and smashing the wire. One of these things was that you shouldn't bang a piece of wire with beads on it... more likely than not, your beads will get smashed. I also learned that beads break easily if you try to force them onto a piece of wire that isn't straight. I think the most important lesson, however, was to look before you cut. To show off all my mistakes, here's my pile of failure: 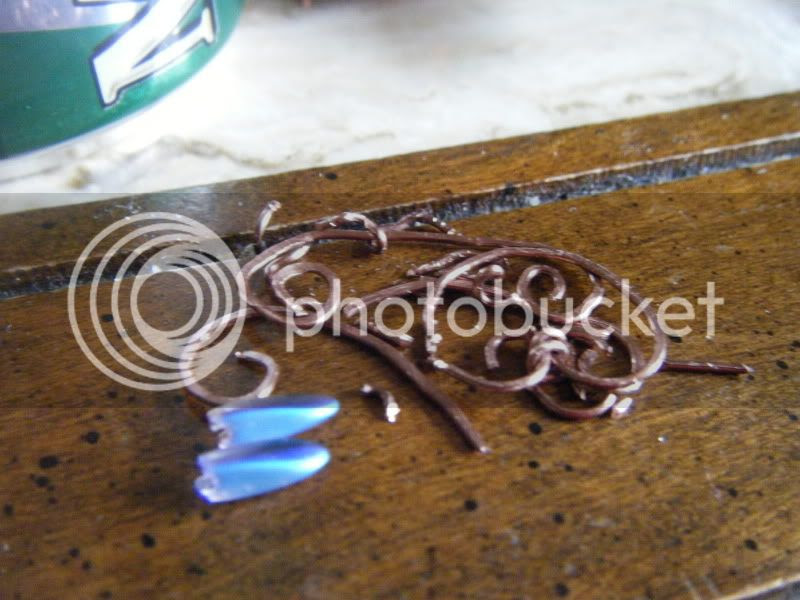 Anyway, for a first attempt, I'm very happy with how they turned out. My mom, at least, who was the lucky recipient of this jewelry, seemed to like it, and now I've payed her back for the pretty dress she made me: 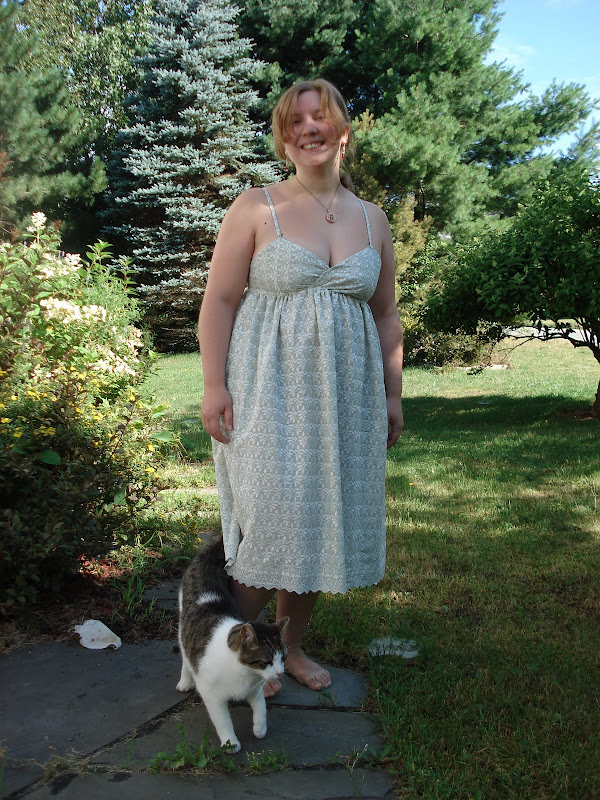 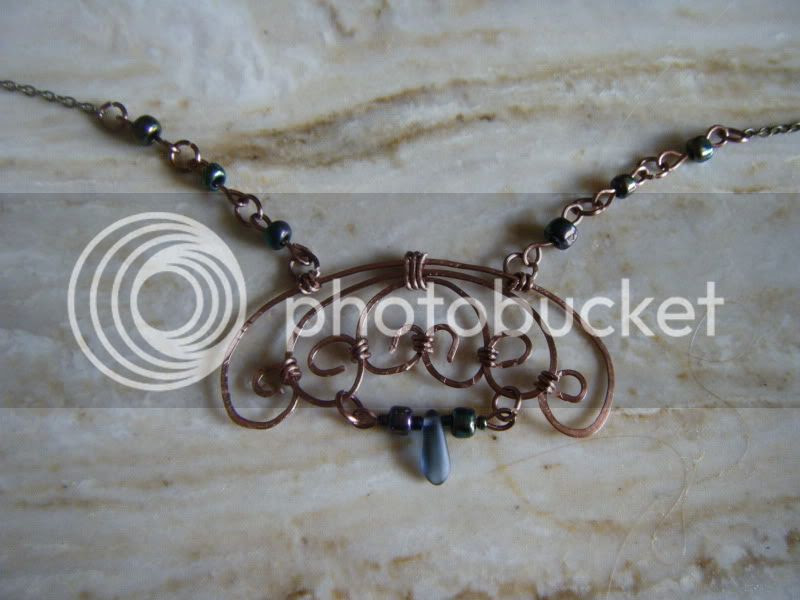 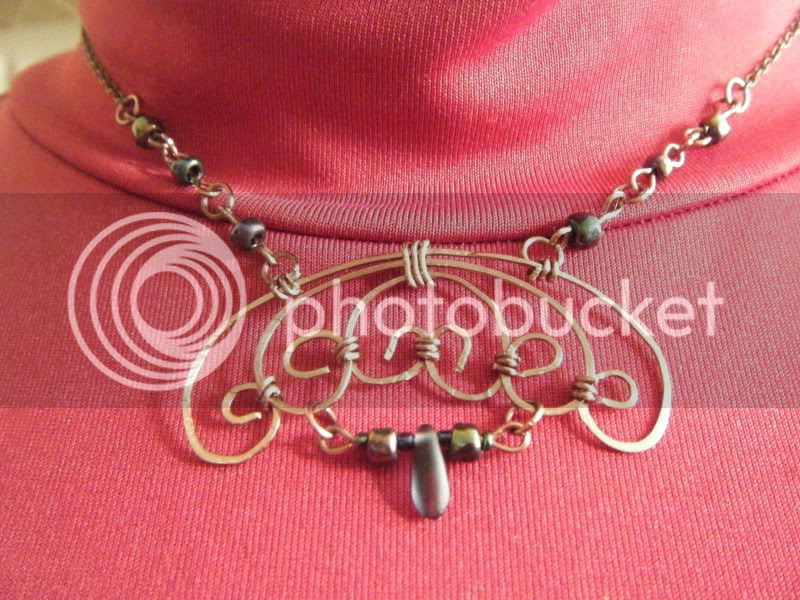 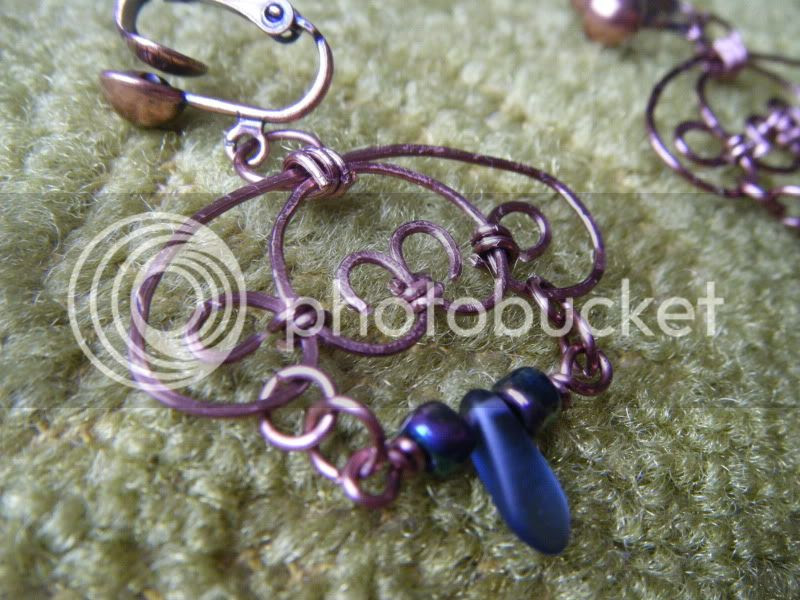 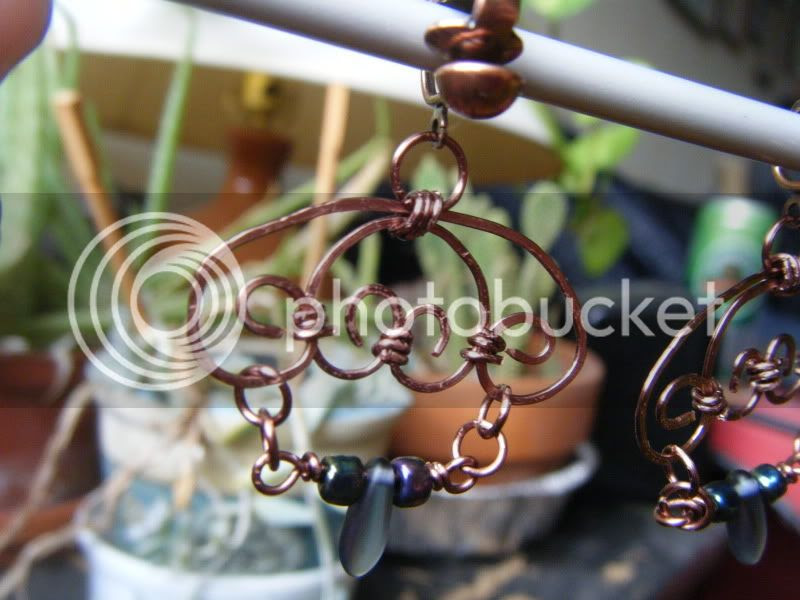 I'm constantly amazed by the awesome things my colleagues are doing. It just goes to show that even graduate students can make really neat cutting edge discoveries in Astrophysics. The most recent star (haha... no pun intended) in our department is Jackie Radigan, a 5th-year PhD student working with Ray Jayawardhana. She studies weather on brown dwarfs, which are essentially failed stars, and has recently made some interesting discoveries, which you can read about here and here.

Artist rendering by Jon Lomberg
Brown dwarfs are astronomical objects that bridge the gap between massive gas giants, such as Jupiter, and the smallest stars. They range from about 13 to 80 times the mass of Jupiter, and though they form in the same way as regular stars, where big clouds of gas collapse under the force of gravity into spheres, they are too small to fuse hydrogen into helium. When they first form, they can be almost as bright as real stars, but as they age, the heat from their formation dissipates and they become fainter and fainter. Because brown dwarfs are so faint, they're extremely difficult to detect and so the first one was only discovered in 1988. If you want to learn more, you can look into basic or advanced online astronomy classes. 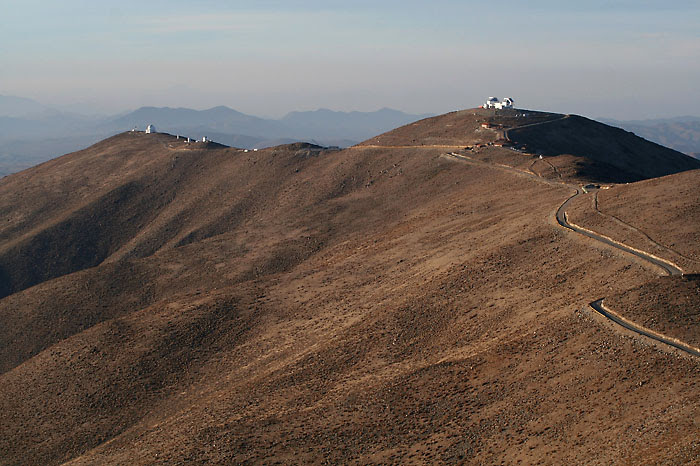 Image of Las Campanas Observatory stolen from Wikipedia
Several of these objects have been discovered since, using large all-sky surveys that explore light in the near-infrared such as 2MASS. Jackie herself has been using the DuPont 2.5-m telescope located at Las Campanas Observatory in the Atacama desert in Chile (pictured above). I'm a little bit envious that she gets to travel to this gorgeous location (since the furthest I've ever been sent on the school's dime is to Milwaukee for a conference... I should write about that sometime). Turns out that that this observatory is also where University of Toronto prof. Ian Shelton made the discovery of the famous Supernova 1987A. That's an interesting connection.

Image of Jupiter's surface stolen from NASA
Anyway, as she tells it, Jackie was sitting in the airport on her way to Chile when she got an email from one of her collaborators with a plot showing a 30% change in brightness over 8 hours of the brown dwarf 2MASS 2139, which is approximately 47 light-years away. This variation is about 10 times larger than one would expect from magnetic features such as sunspots. She and her collaborators think that this change is due to a huge storm on the surface of the brown dwarf that blocks out some of the light coming from the brown dwarf's surface, something like a supercharged version of Jupiter's Great Red Spot (pictured above). The change in brightness comes about as the brown dwarf rotates on its own axis. With more detailed observations, that is, with higher resolution and a broader frequency range, they'll be able to make sure that their model is correct.

It will be very interesting to see what sort of follow-up results Jackie and her collaborators come up with over the next several months. A paper about this research will be submitted to the Astrophysical Journal very soon, but you can read her preliminary article here.
Posted by Unknown on 10/12/2011 12:36:00 PM 0 comments

The cutest octopus in the world

Joanna, over at the Happy Seamstress, has been extremely busy making extremely adorable knitting patterns purely for our enjoyment. One of these is Octie. Here is an army of the friendly cephalopods that Joanna knit up herself:

This pattern is for sale as a pdf on the Happy Seamstress website (only $1.49! cheap!), but Joanna was also selling Octie kits at Fan Expo. They came in five colours of this very soft DK-weight superwash merino with different eye colours and more than enough stuffing. She also included knitting needles and a darning needle, so you really didn't need anything else to get started. And the kits just looked so perfect all lined up on the table.

The Happy Seamstress will be selling these kits at future craft fairs in the Toronto area, so stay tuned if want to pick one up! She also has some other super cute patterns up her sleeve, so watch out for those too.

As for my own version, I decided to forgo the button eyes and instead try out my brand new toy: a needle felting tool! 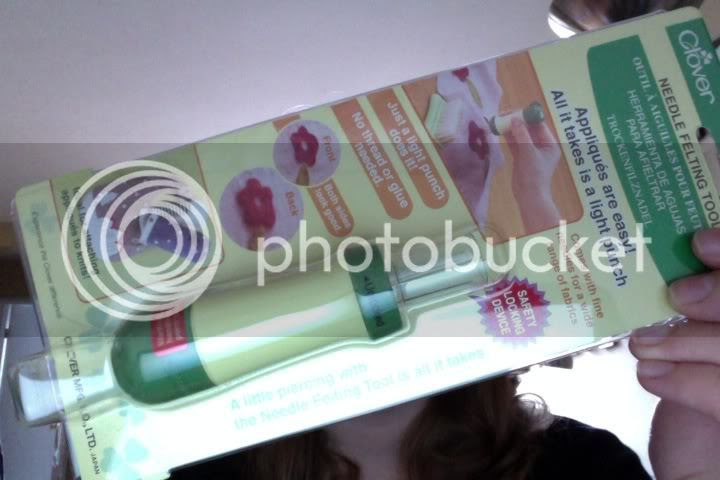 It turned out quite well, if I say so myself. 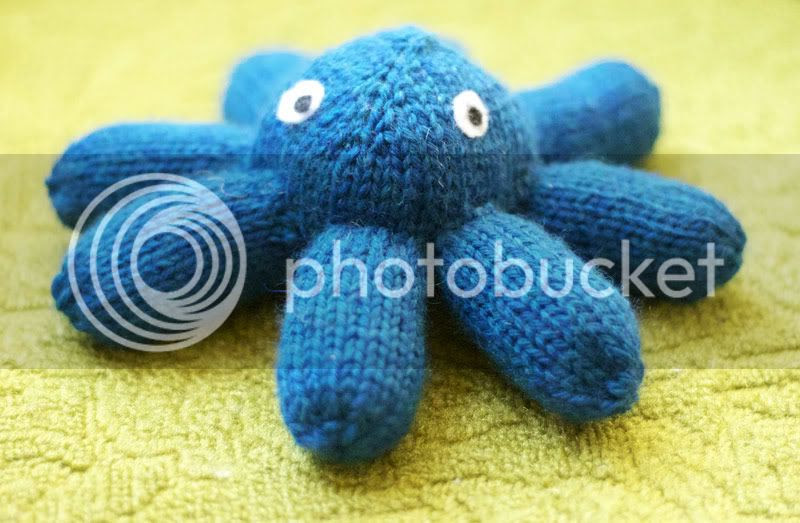 And Octie is also quite fond of sitting on my head.