I've recently become enamored with chain-mail jewelry (especially after making that jewelry for my mom), and recently, after being inspired by some earrings from this etsy shop that are no longer for sale, I decided to give it a another go. 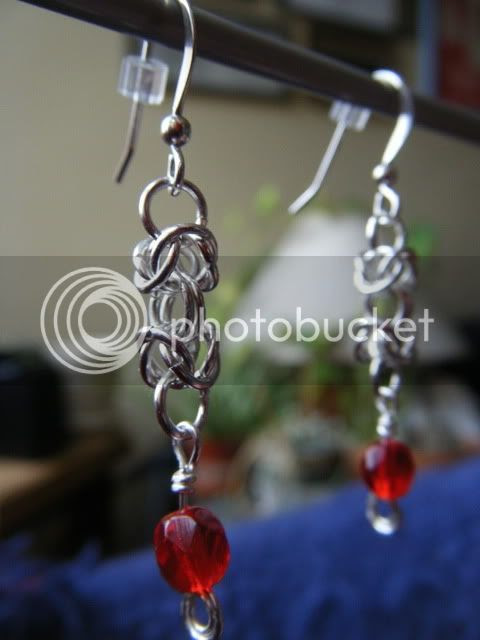 With the exception of the ear wires, I just used material from my beading stash, and the whole thing took me less than an hour, so they weren't much of an investment all things considered. The ear wires are pure silver, the bead is glass, I think, and the wire and jump rings are silver plated. The hardest part was making the loop for the bead wire. 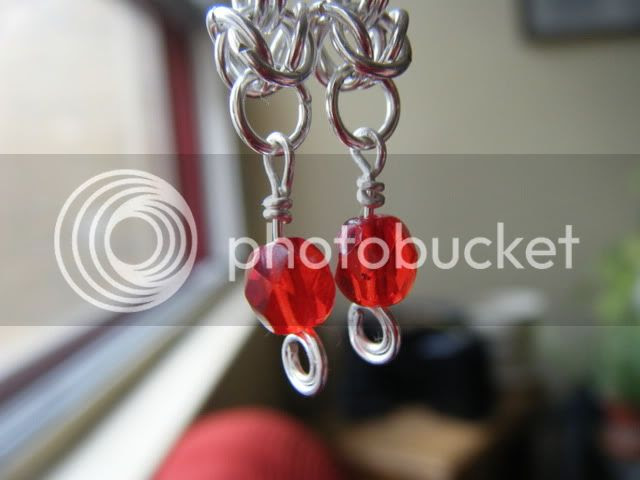 This next set of earrings was a little more difficult, but only because crocheting wire is an act of pure masochism. Well, it's not that bad, but also not for the faint of heart. 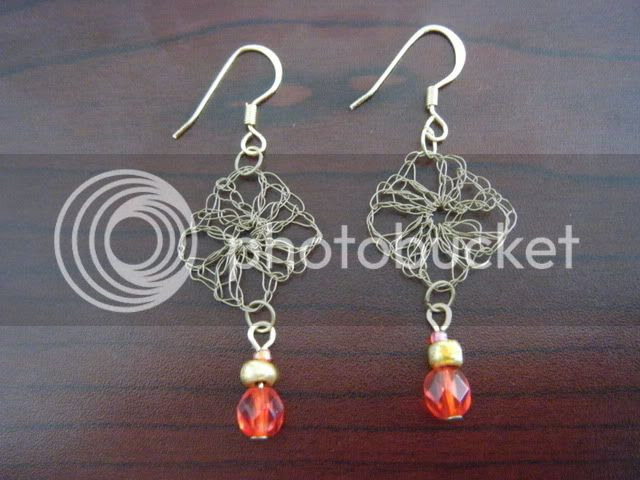 I used the thinnest wire I had with a 2.5mm crochet hook and made my own jump rings with slightly thicker wire. The join in the jump rings isn't as tight as I'd like, so I'm thinking it might be worth investing in a soldering iron. I'm not sure what the construction of the wire is, but the thinnest wire certainly isn't gold because it's already oxidizing a bit. I guess I'll have to invest in higher quality materials too. 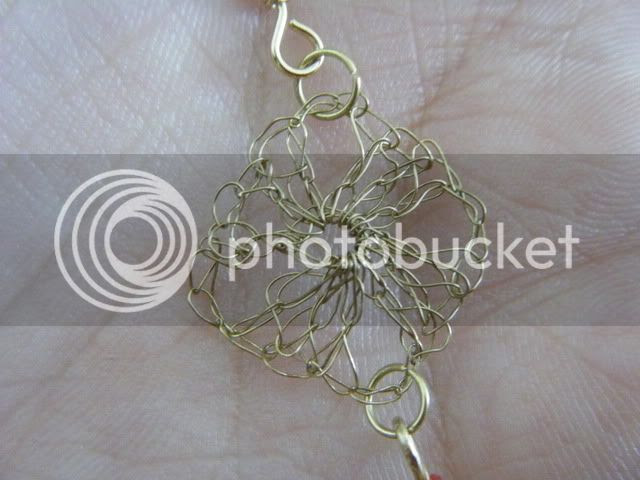 Gosh, it's been a while! Please forgive me for my sporadic posting... All I can say is that I've been busy with school.

Pay-It-Forward update: Thanks to everyone who commented on my Pay-It-Forward post. I will be giving awesome hand-made gifts to Tas (who has an awesomely named blog), Eleanor (my mom), Ellie (a fellow grad student in Toronto), and The Happy Seamstress (my partner in crafty crime). If you still want to participate, there's still room for one more comment, so feel free to leave one.

Now on to the interesting stuff! I've actually been quite crafty of late, though you'd never know it from my lack of posting. I'll go over my latest finished objects in more or less chronological order. Warning: some of these date back to January... Eep! 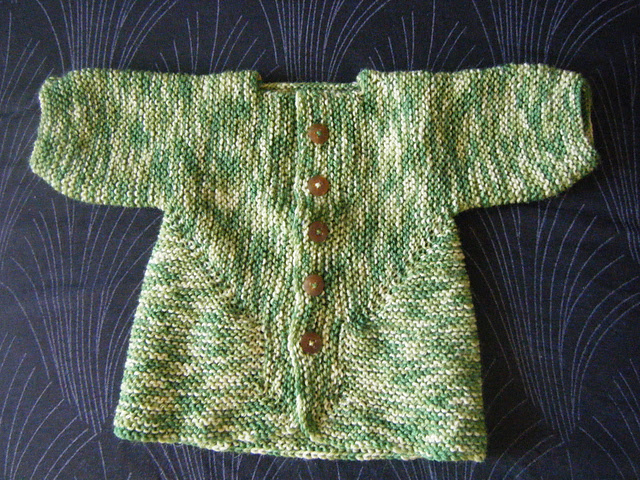 First on the list is another Baby Surprise Jacket, the legendary pattern by Elizabeth Zimmerman. I knit this one out of S.R. Kertzer On Your Toes, which is quite a lovely yarn to work with. This one took me a little longer than the last one (a full week instead of 4 days), but I certainly enjoyed it just as much. This pattern is strangely addictive. I knit this for little Eleanora, the beautiful daughter of my friends who got married a couple of Halloweens ago. 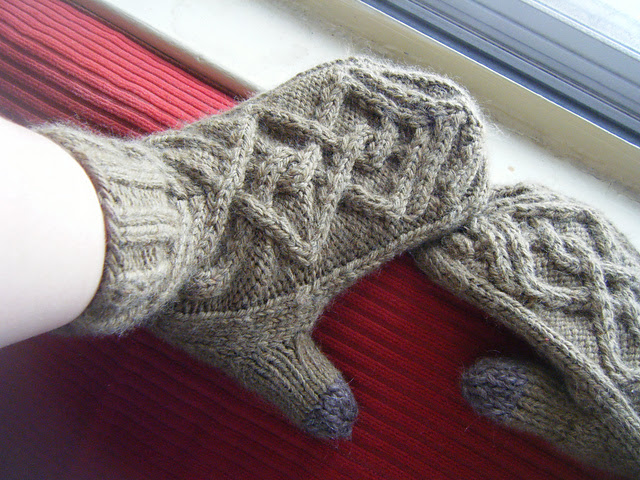 Next up is a pair of mittens for me! This is the Chevalier pattern by Mari Muinonen. I used a couple of skeins of Misti Alpaca Merino Worsted, which is a wonderfully soft yarn, though there were several cuts in the plies of the yarn in the balls I got. That was annoying, but I managed to hide most of the errant strands. Even though I did fewer repeats than were called for in the pattern (because I have very small hands) I still ended up running out of yarn when I got to the tip of the thumbs. You can see from the photo that I've got a different colour yarn there. I was pretty pissed at first, but now I kind of like how it looks. The boyfriend calls my "thumbs" when I wear them. I knit these using the magic loop method, which was ok, but I think I still like my double-pointed needles better. 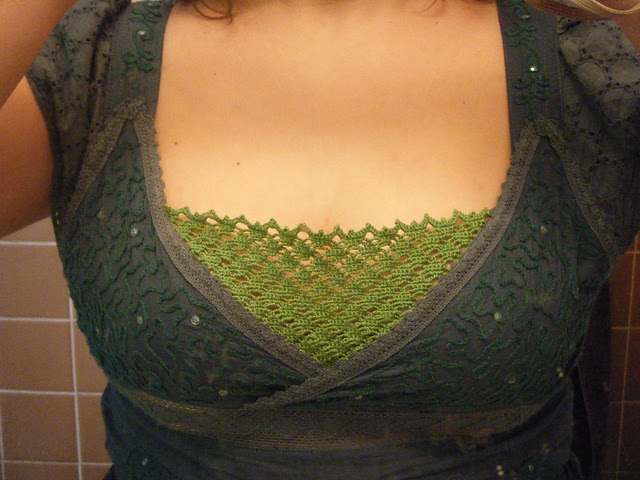 I haven't given up on crochet either. I have a lot of dresses that leave very little to the imagination when it comes to cleavage, so I figured I should make myself a modesty panel. It's quite an ingenious design, the Lacy Cleavage Cover by Linda Z. O'Halloran. I used some good ol' Royale Crochet Thread which was probably a little thinner than the pattern called for, but I managed to make it wide enough with a little improvisational edging. 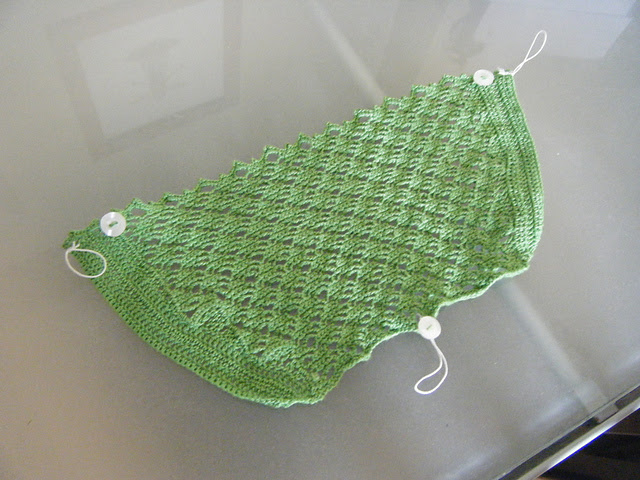 I'm a pretty big fan of the fastening mechanism for this thing. It attaches to my bra with those little elastics. 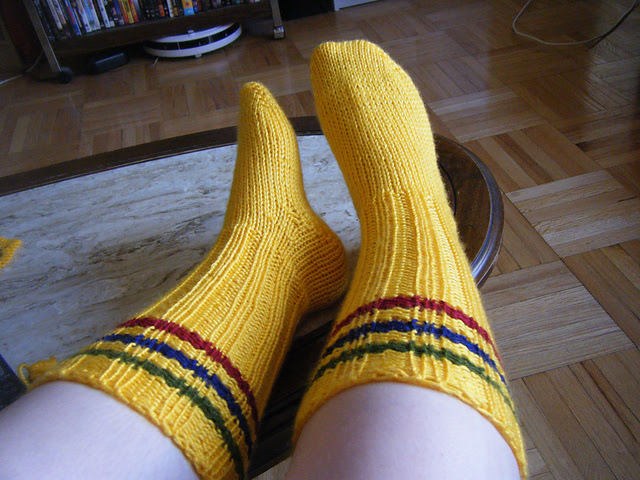 Next on this lengthy list of finished objects is an awesome pair of socks for my friend Daphne. She requested a pair of thick, comfy socks, and when I asked her what colour she'd like me to make them, she simply said, "Oh, I don't know. Make them wild!" And so I did. I used a skein of Bernat Satin and some random scrap yarn for the stripes, and I knit them using a generic short-row toe-up pattern. I made my first attempt at knitting one sock inside the other on double-pointed needles by first creating two short-row toes and then putting one inside the other and continuing with the double-knitting outlined in that awesome Knitty tutorial. I'm pretty happy with the result (and so is Daphne), though my gauge was a little looser than I usually like for socks. 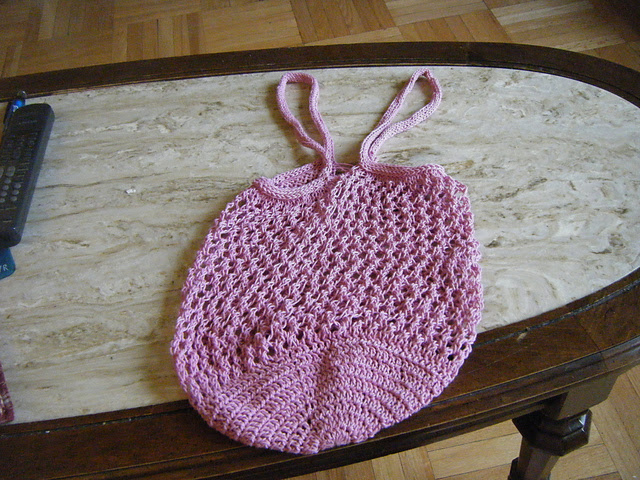 Last but not least is this wonderful little tote bag, which I made using Elisa's Nest Tote by Purl Soho. I wasn't entirely satisfied with the seaming in this pattern last time I made it, and I was looking for a slightly sturdier bottom, so I decided to make it a crochet/knitting hybrid. The bottom was crocheted in the round in double-crochet and increased to 80 stitches, which I then picked up with my circular needle and knit in the round in pattern. I therefore didn't have to bind off before doing the applied i-cord edging. The latter caused the opening of the bag to be a little tight, but I can live with that.