Playing catch-up: a summer of knitting

I haven't really been a dedicated knitter this summer. Much of my knitting time during the school year is while on public transit or sitting through seminars. I've been riding an e-bike around since March, and so have only had to take transit a few times, and the seminars are much less plentiful during the summer. Still, I've managed to complete a few projects over the last few months while watching TV shows with the boyfriend, or during a much-needed break from coding or paper-writing. Here are five projects that I've neglected to write about over the summer.

Besides the wedding knitting from the previous post, I've mostly been working on small quick projects because I haven't had the attention span for much else. One of these, my Jayne Hat from the show Firefly, I actually finished in just one day in March. I used the Knitting Ninja Edition of this pattern by Allison MacAlister. The yarn is Cascade 220 held double, and I still have enough yarn to make another one, so that's totally happening. This is the first hat I've made that the boyfriend would actually be happy to wear, so I'll have one for each of us! How cute! 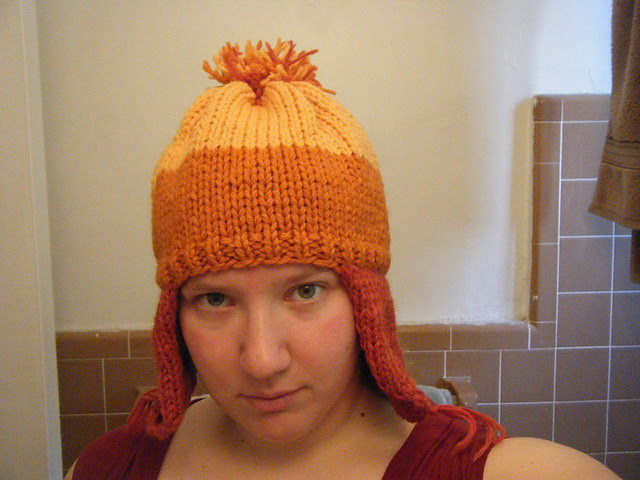 Next, these socks, which I actually finished in December, but never got around to blogging about. They're simple toe-up, short-row heel, knee-high socks with calf shaping, using the same basic pattern as for my Lightning Socks. The yarn is Knit Picks Felici in the colourway Botany (now unfortunately discontinued), which is quite lovely and soft. 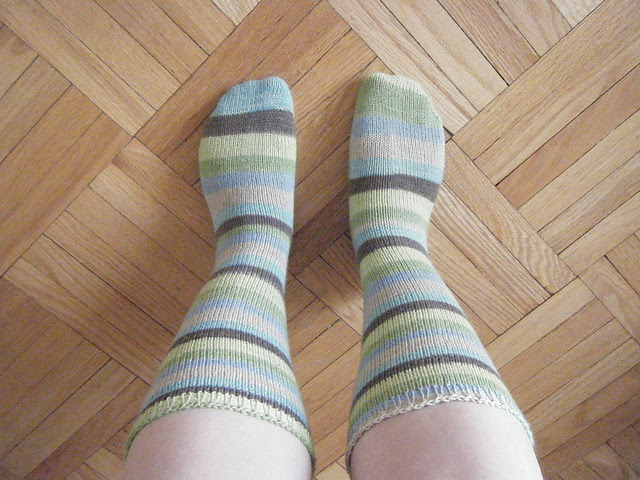 After knitting those Mario Mushroom Mitts for Ellie, I figured I was capable of making some gloves without a pattern, and believe it or not, I succeeded! I used the leftover yarn from those mitts, and then, of course, ran out of yarn, so I had to finish the fingers on the second glove with something else... figures. Anyway, I didn't let it phase me too much, and I'm calling them my patchwork gloves. 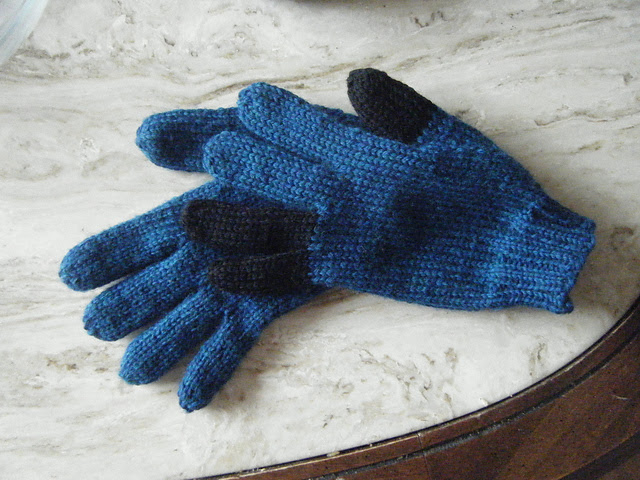 For Christmas, Joanna had given me a couple of her knitting kits, and I finally got around to knitting one of them in February (ok, still not summer, but I hadn't gotten around to writing about that either). This was one of her cupcakes from the Cherry on Top pattern. It's actually a whole lot simpler than it looks, and the entire thing is knit in one piece, except for the cherry on top. It only took me a day to make. Mine is a chocolate cupcake with strawberry frosting! 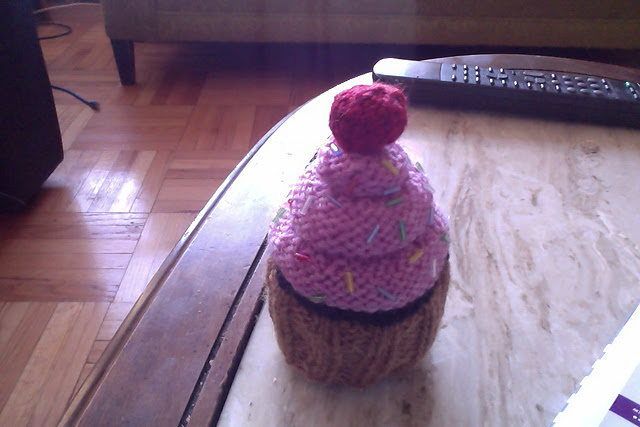 Finally, another pair of socks that I really enjoyed knitting. I'm always interested in interesting sock construction, and when I saw the Carousel Socks by Louise Robert, I knew I had to make them. I also just happened to have the perfect yarn from my recent Etsy purchase! The colour changes in Green Progressions Dye's End worked perfectly with this pattern. I think if I were to do it again, however, I'd try to modify them with calf increases so I could have knee socks. 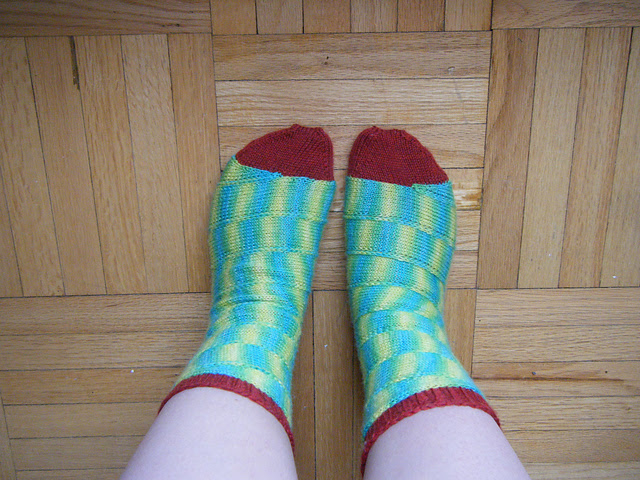 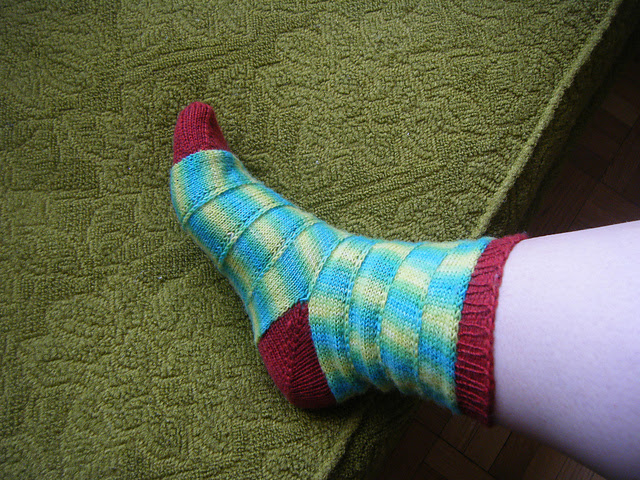 And now I've finally caught you up on all my finished projects! Next time, some adventures in dying (the good kind)!

I've reached the age of weddings... I was invited to four weddings this summer, and at least a couple more are happening within my group of friends which I wasn't invited to (because they were in a different country or whatever). Well, I turned 26 this year, so I guess it's not totally unexpected. (Just don't ask me to get married...)

If you've been following this blog for any length of time, you probably know that I've made it a tradition to knit potholders as wedding presents (see here, here, here, and here), but somehow I've managed not to knit a single one this summer. Instead, I've been focusing my crafty energy on more lacy and delicate endeavours. So far I've completed two crafty wedding gifts, with a third one on its way (but the wedding is this coming weekend, so it must remain a secret for now).

My first bit of wedding knitting was for a good friend who got married in England on July 1st (so this falls into the "weddings I didn't attend" category). She wanted to have something to cover her shoulders that wouldn't cover up her dress, and that was less likely to fall off than a shawl. The perfect garment? A lacy shrug! I sent her some pattern ideas, and she ended up going for I Do by Jody Prival. 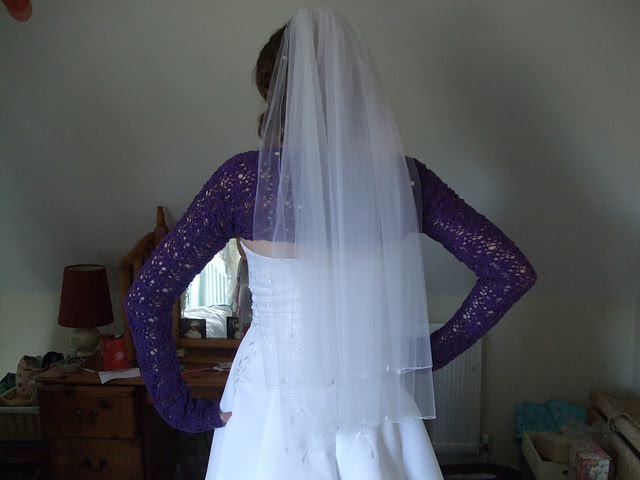 She didn't want the bell sleeves, so I modified it to be the same width from beginning to finish, which actually made the knitting a lot easier. The colour had to match the groomsmen's ties, which were a dark purple plaid. We found the perfect colour of yarn: Cascade Yarns Ultra Pima in the Regal colourway. I didn't have much time to take pictures of the finished project, partially because I had to pull an all-nighter to finish knitting and blocking it before she had to get on a plane the next day. Fortunately, the blushing bride was able to take a few shots for me the morning before the wedding:

The next wedding craftiness came about when I was invited to the bride's bridal shower, and I hadn't bought a gift (I should have known better). As a compromise, I told her that I would make her wedding garter. 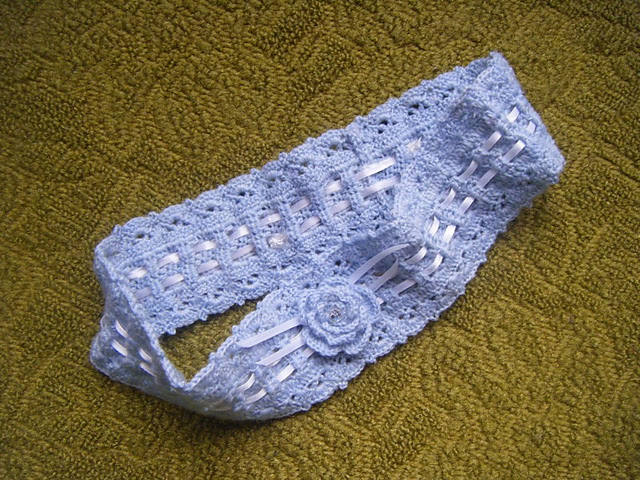 I used the Crochet Lace Wedding Garter pattern by Melisa Darnieder. I liked working it a lot, and I think it'll be my go-to pattern if I'm ever asked to make a garter again. The yarn was Patons Kroy 3-ply, which I found in my grandmother's stash, and which I'm fairly sure isn't sold any more. 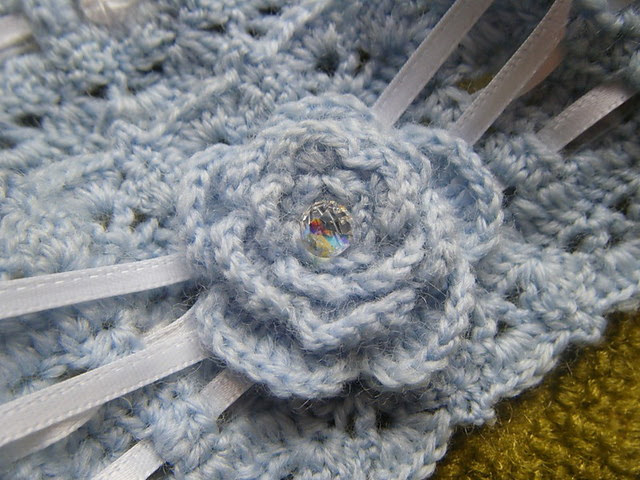 I made the little crochet rose suggested in the pattern, and finished it off with a little Swarovski crystal in the centre to give it a little bling. Joanna was kind enough to let me raid her ribbon stash, and I found the perfect grippy transparent elastic and a nice wedding-y ribbon. This actually fell under the category of something old, new and blue because it was old yarn, a new thing, and a blue thing. (I could have asked her to give it back for it to be borrowed, but I figured that'd be a little much.) 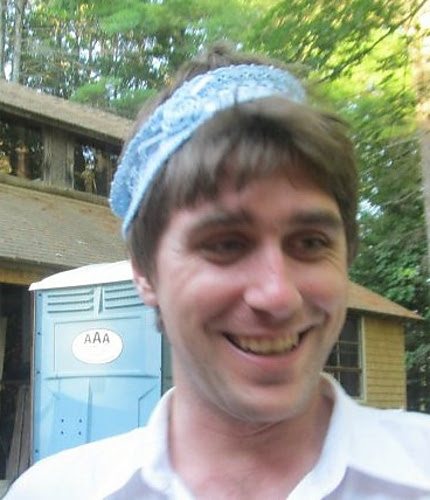 As per tradition, the bride threw the garter for all the young men to catch, and the above fellow was the lucky winner. I didn't actually get any pictures of the bride wearing the garter, but here's a nice one of them during the ceremony...

Pay-It-Forward #4: A knitted Lord of the Rings bag

Let's not even talk about what a terrible blogger I've been of late. Darn... we're talking about it, aren't we? Anyway, let's just say that crafting hasn't been a huge focus for me of late. It's not that I don't have anything to write about, but my interests have wandered. I've been travelling a ton, riding around on my e-bike instead of riding the TTC (which minimizes my knitting time), and working on getting healthy (you can see my fitness blog here if you're interested). Anyway, I missed this blog, so I'm going to attempt to be better at keeping it up to date.

I'll begin by talking about something else I had put off for a long while: the fourth item I was to make for my Pay-It-Forward exchange. This hand-made gift was to go to Tas, who was the only person on my list who I hadn't met in real life. I really wanted to do a good job on this one since I was going to be sending it to a far-off land, which might have been why it took a while. 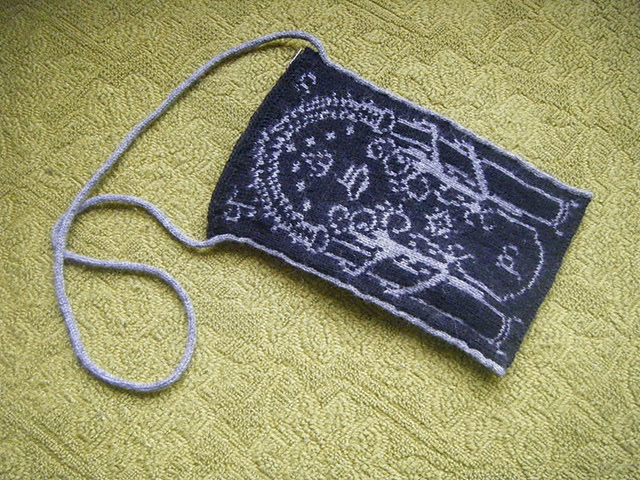 What I ended up making was a bag which used the Doors of Durin chart created by Andrea Krüß-Anders. This was actually the second attempt. For the first one, I used Cascade 220, a worsted weight yarn, and the charted piece turned out HUGE! I started over using Knit Picks Palette (left over from my Diatom shawl) and 2.25mm needles. 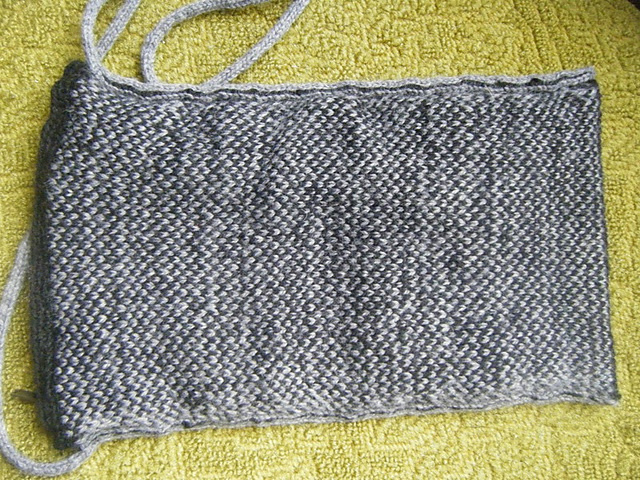 I used a simple [knit foreground colour, knit background colour] pattern for the backside of the bag so that I could knit it in the round (starting with a figure-eight cast-on). I did an applied i-cord edging which turned into the i-cord shoulder strap. I then did a couple of rounds of single-crochet around the bag opening for sturdiness. The part that took me the longest (for procrastination reasons) was just sewing in the zipper and lining. 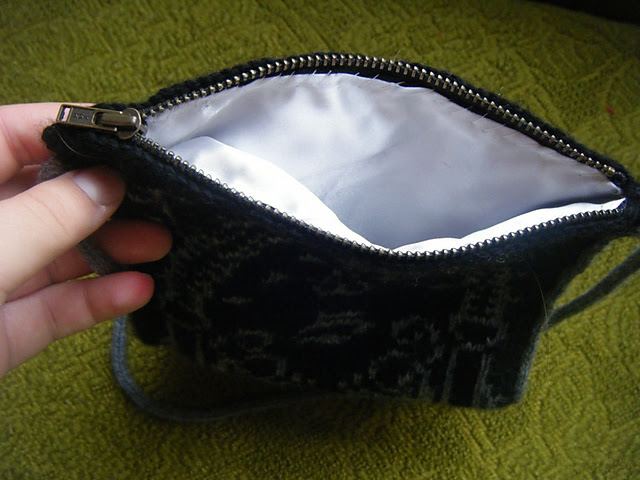 I'm actually quite proud of how that turned out. The zipper was the only part I had to buy special, and putting it in was tricky, though not too hard. The lining fabric is actually from the packaging of some fancy headphones a friend who was staying with us bought. I thought it was too nice to throw away and figured it'd come in handy someday. And it did! I might use a different sewing stitch in the future to sew it to the zipper, but I think it still turned out ok. 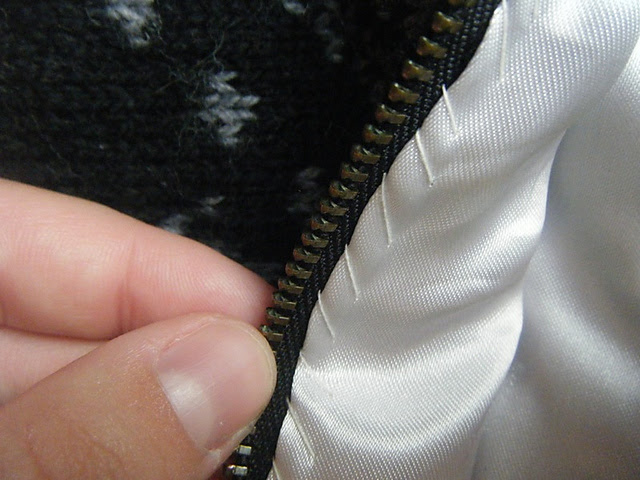 Curiously enough, I think I'm starting to like colour work... I've avoided it in favour of more textured stitch patterns like cables and lace, but I could see myself doing more in the future. Anyway, I sent this off a little while ago and Tas really liked it! And that's all that really matters!