I have trouble throwing anything out. I got a lot better at it during our move, since getting rid of something I hadn't used in five years made more sense than packing it up, but I have to say that keeping things "just in case" is definitely still part of my mentality. I would rather find a way to re-use or re-purpose something than just throw it away. For that reason, I still have a pile of the boyfriend's old shirts that I plan to make into a dress, and a big ziplock bag full of can tabs that I eventually plan on making into a purse. Someday… someday…

Because I participate in a whole bunch of science outreach events, I tend to end up with a lot of free t-shirts, most of which end up languishing in the bottom of my drawer. In an attempt to satisfy my aversion to waste, I decided to convert some of them into t-shirt yarn! I don't have any pictures of the process, unfortunately, but I followed the instructions posted by Fuck Yeah Craft! (Pardon my french!) I ended up with one ball of yarn from an extra-large t-shirt: 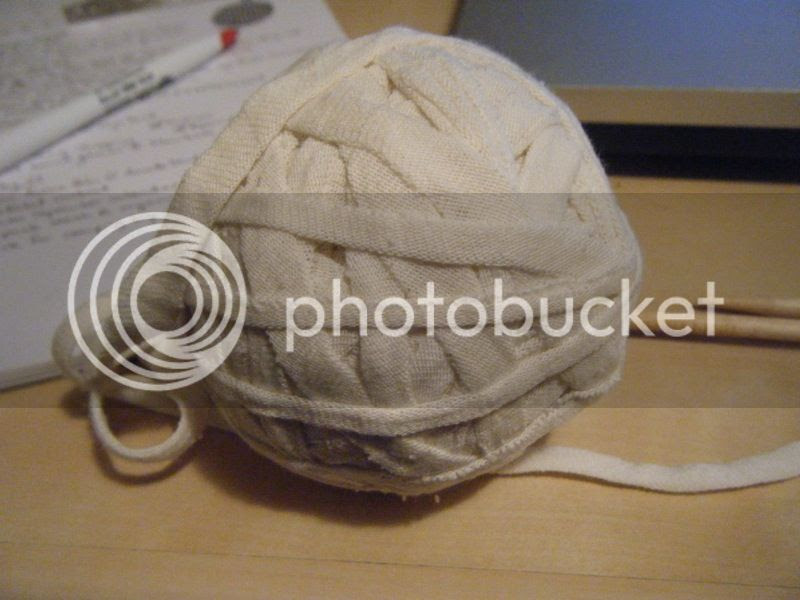 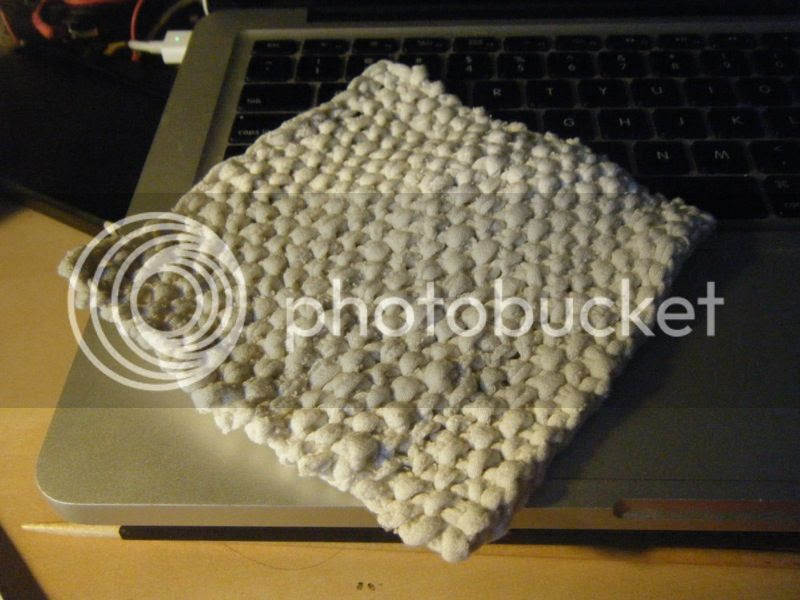 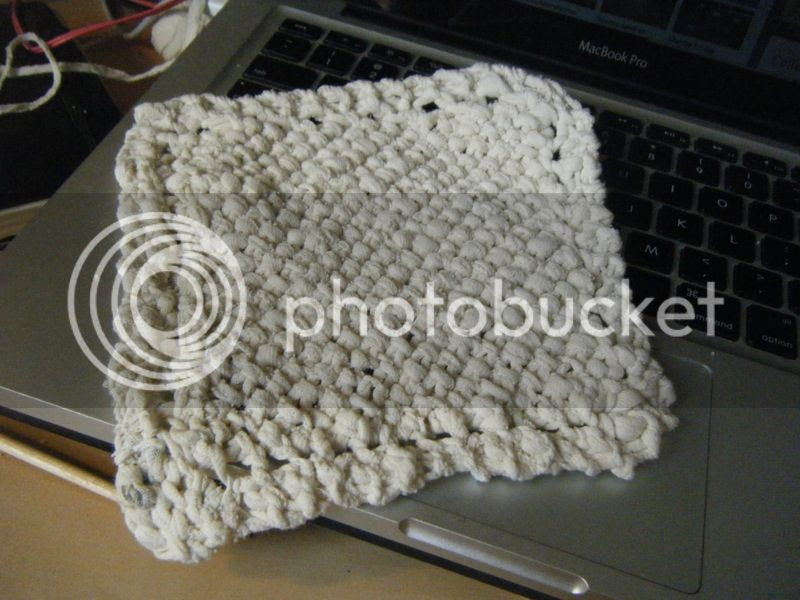 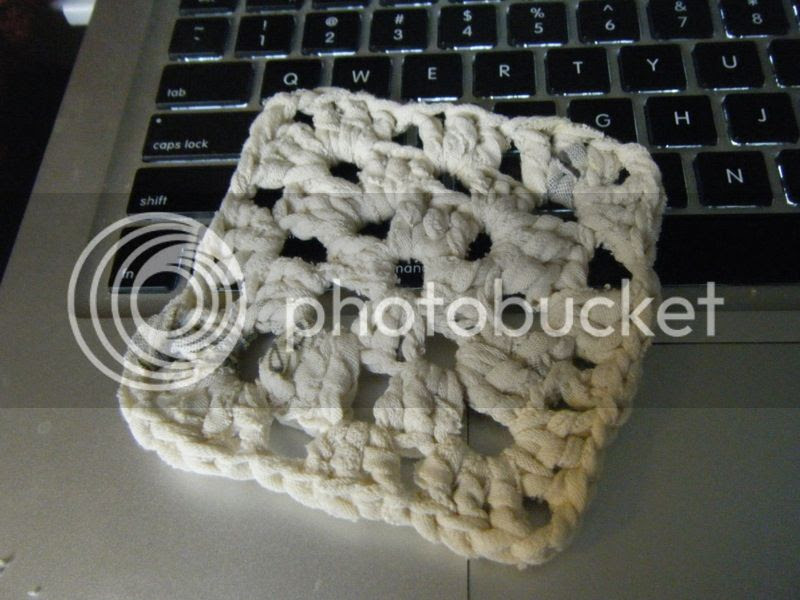 The first dishcloth is just a simple square knit in seed stitch, the second one is a diagonally knit Grandmother's Favourite Dishcloth with seed stitch instead of garter stitch, and the coaster is just a little granny square.

The verdict? Knitting with t-shirt yarn is fairly easy. It has the same stretch as a wool yarn and is pretty soft. My only complaint is that it sheds a lot. My desk ended up with little fluff grains all over it. As for the finished product, so far the dishcloth I'm using to wash the dishes every day is holding up very well. The fabric is very sturdy. So if you have some old t-shirts lying around that you don't wear any more, I'd highly recommend this as a way to re-purpose them!
Posted by Unknown on 9/23/2014 08:27:00 PM 0 comments

I mentioned in a previous post that the boyfriend and I moved at the end of July. Now that we're pretty settled in the new place, it's about time I told you a bit about it!

We'd been living at the same apartment for just about six years, ever since we moved to Toronto. It wasn't bad for what we were paying: a two-bedroom apartment on the 6th floor of a 1950s-era building with a great view out of our West-facing window. But we had no balcony, no control over the temperature, and laundry was all the way down in the basement at an extra cost. On top of that, the property management company made it clear that they wanted us out so they could renovate our apartment and charge the new tenants several hundred dollars more a month. And so, when the opportunity to move to a real house with a back yard, in-suite laundry, and central air came up for only a small increase in rent, we jumped at it.

At the end of July, we loaded all our belongings into a big ol' truck (with considerable help from our friends) and officially changed address! This is our new home: 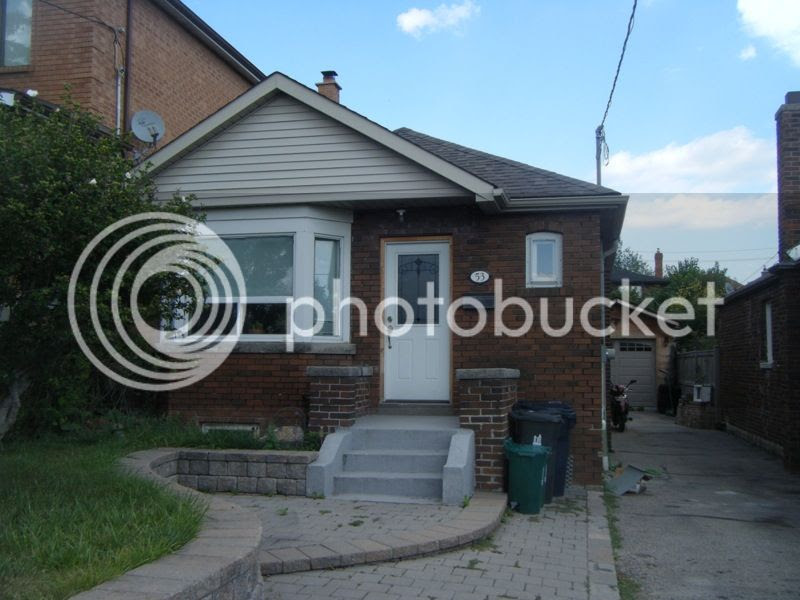 We live on the main floor while our landlord occupies the basement. We have two bedrooms, and the square footage is approximately the same as our old apartment. The house has the same construction as many bungalows built in the early 1950s, post-WWII. The kitchen and living room are in the front, and the two bedrooms are in the back, with a side door near the front and narrow staircase that leads to the basement (where the laundry machines are a kept). Here's the living room, complete with fake fireplace: 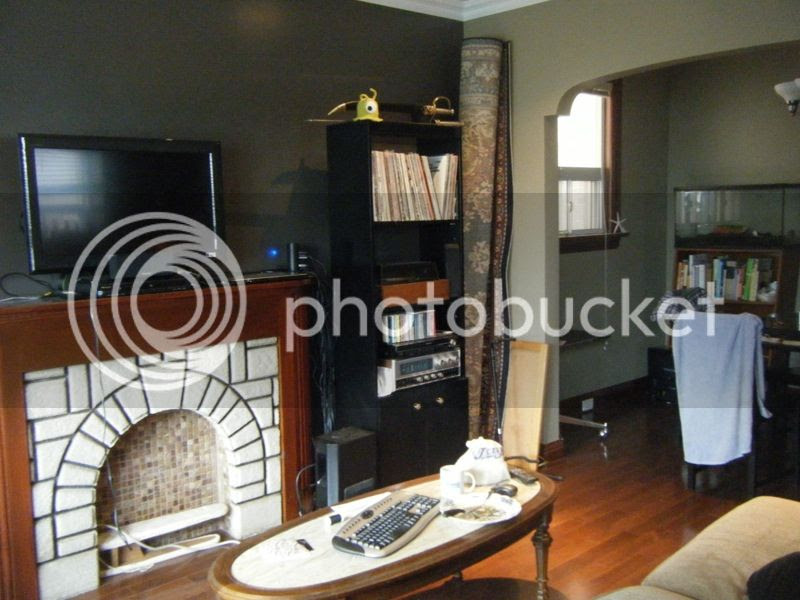 And here's our new kitchen (ignore the boxes that still need to be unpacked in the back room): 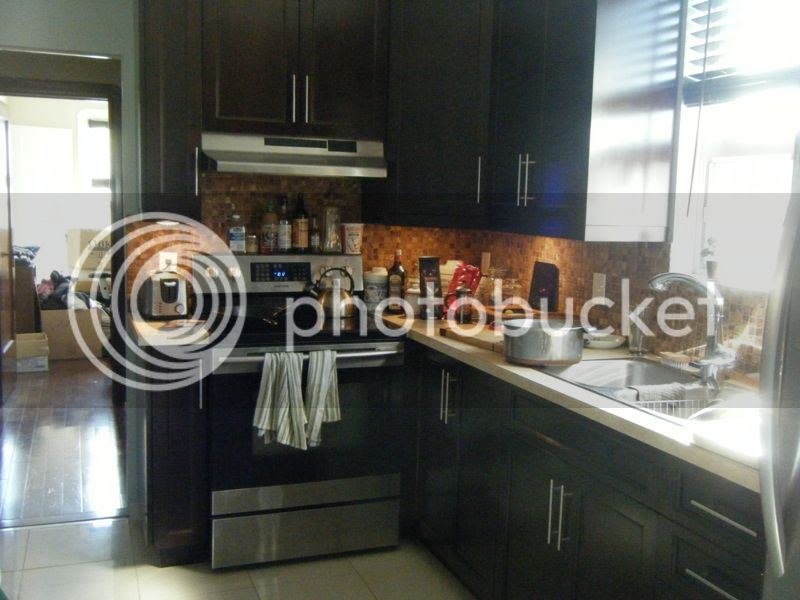 There's an opening in the wall between the kitchen and the living room, making the whole place feel very open, and probably larger than it actually is.

The real selling point, for me at least, was the back yard: 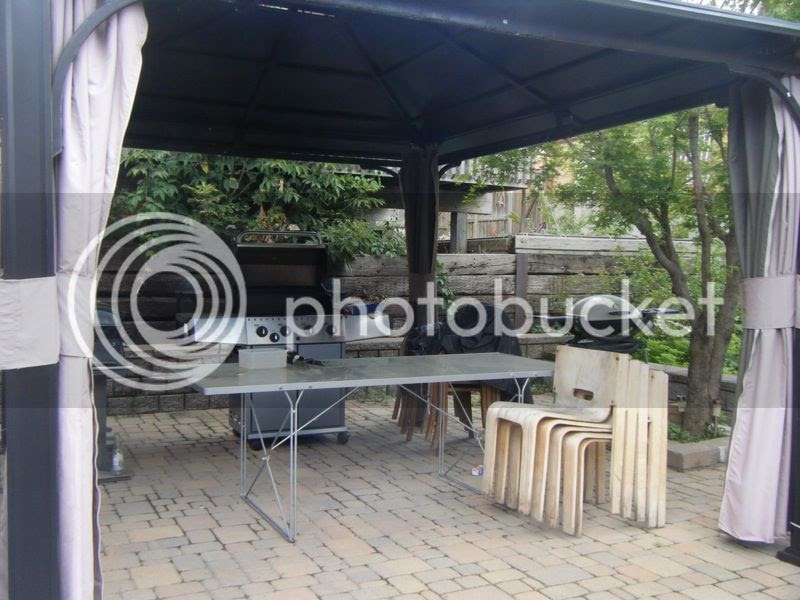 As you can see, we have access to a brand new barbecue, which we have used quite a bit. The yard has a few square metres of grass, but the best part is the amazing garden. We've been told to help ourselves to it! Here's just under half of it: 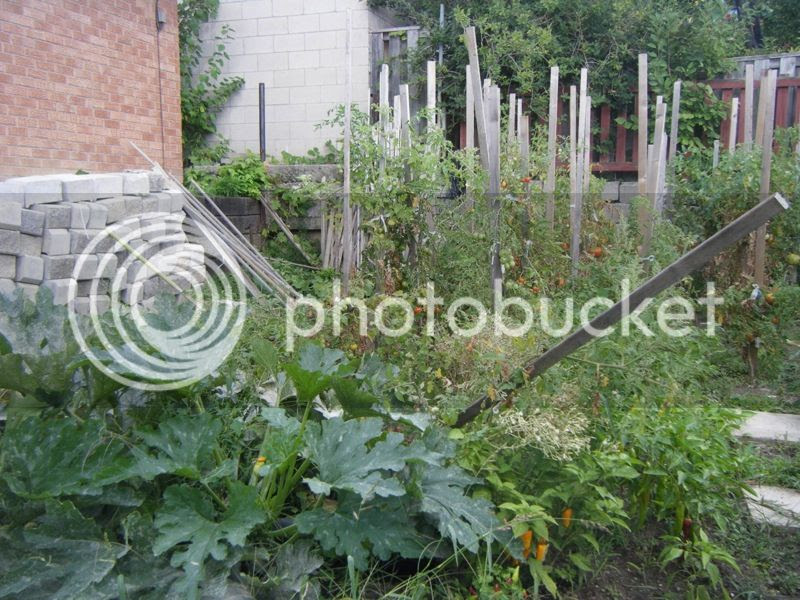 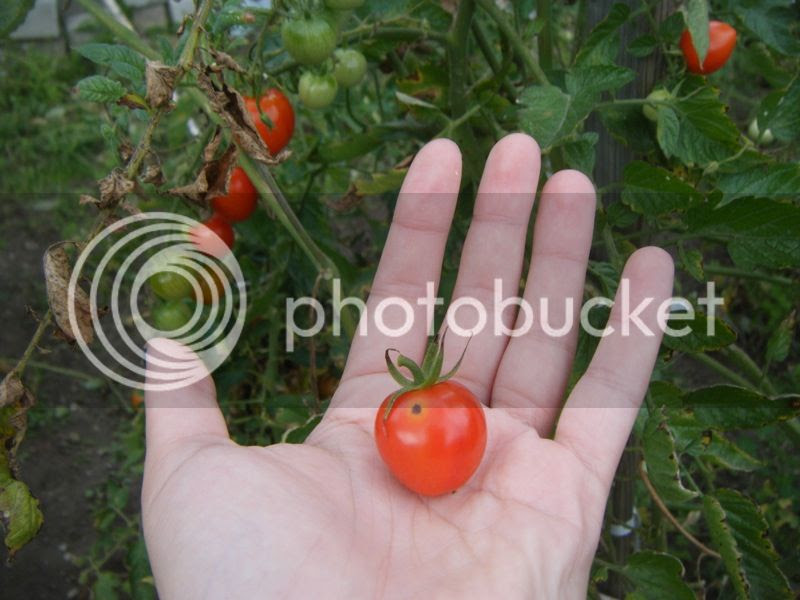 There's also a giant zucchini, which reminds me a little of a sleeping beast (at the time this picture was taken, it was about 2 feet long -- now it's at least a foot longer!): 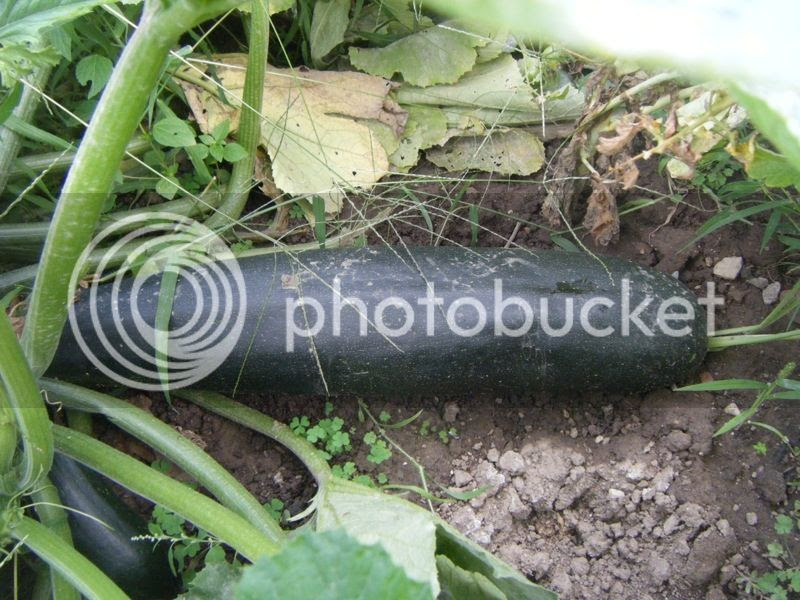 A very dear friend of mine will be moving to London, England in a couple of days to pursue a PhD and to embark upon a great adventure. Several months ago, she asked me to knit her a sweater which would make it impossible for any Brit to mistake her for American. She suggested the CBC sweater, conceived of by Granted Clothing and originally knit for a brother-in-law who had also moved to England. Here is the original sweater: 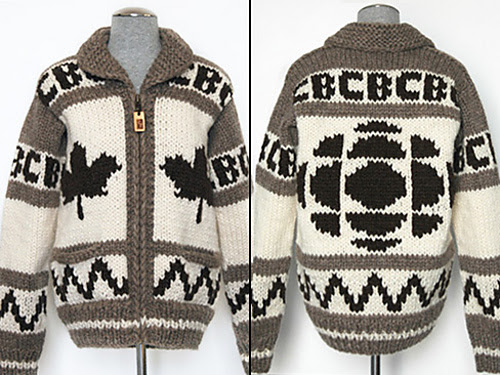 After having agreed to knit it (and arranging to get a fair bit of her furniture in return), I did a bit of research to see if anyone else had come up with a pattern for this sweater. Alas, Natalie Bursztyn had come up with a pretty good facsimile, but it lacked the authenticity I sought. Eventually, I decided to make up my own pattern, eyeballing the intarsia from the photographs and guessing at how to put it together as I went along. Were I to do it again, I would likely change a few things, but I'm fairly happy with the results. Here's the finished product in all its Canadian glory: 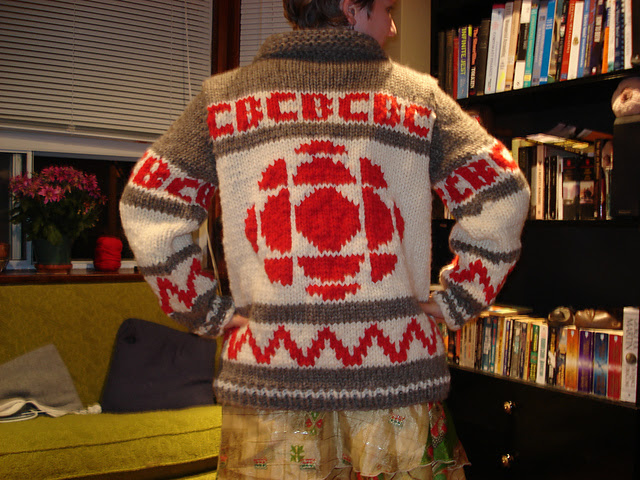 I may or may not publish some charts of each design here whenever I get around to it (and maybe even a full pattern!), but I'll give a brief description of how I went about making the sweater now. I started off knitting the sweater in pieces, two fronts and a back, with sort-of intarsia where I would carry the yarn behind for the design. Were I to knit this sweater again, I would likely do the bobbin thing with fewer floats, since the colour work parts tended to be twice as thick as the solid colour bits. I would also knit it as a single piece for the body because seaming is annoying.

I ended up seaming up the fronts and backs to make a vest and then picking up stitches around the arm holes to make the sleeves, with a bit of short-row shaping to decrease underarm bulkiness. For the collar, I picked up stitches from the front and the back, and knit in garter stitch until it looked about right. The fronts were finished with a single-crochet border to which I sewed the zipper. 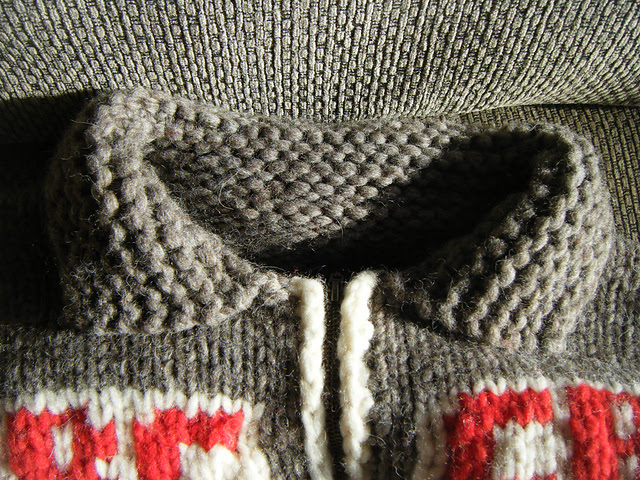 The most harrowing part was making the pockets. I'd forgotten to put in the waste yarn normally required to make an afterthought pocket, and so instead cut one stitch and unravelled the stitches as wide as I wanted the pocket to be. I then followed these instructions to knit the pocket from the live stitches. Here is the result: 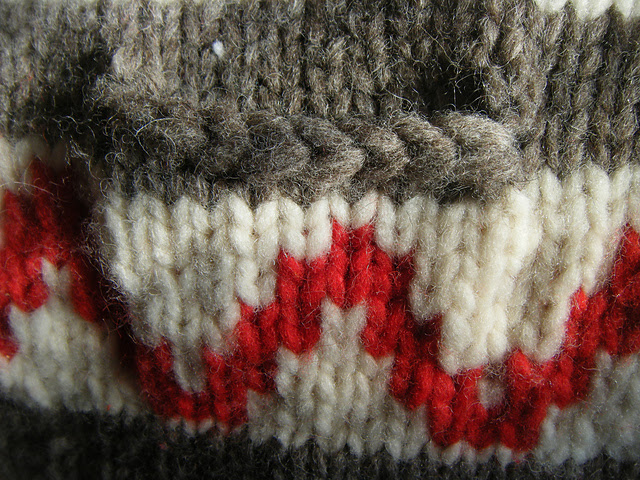 The yarn, by the way, is Briggs & Little Country Roving, which was like nothing I'd ever knit with before. It's very loosely spun (if it's really spun at all), and very thick and squishy. It might have made for a sweater that was a tad larger than I expected. My friend was swimming in it, and it fit the 6'2" boyfriend perfectly: 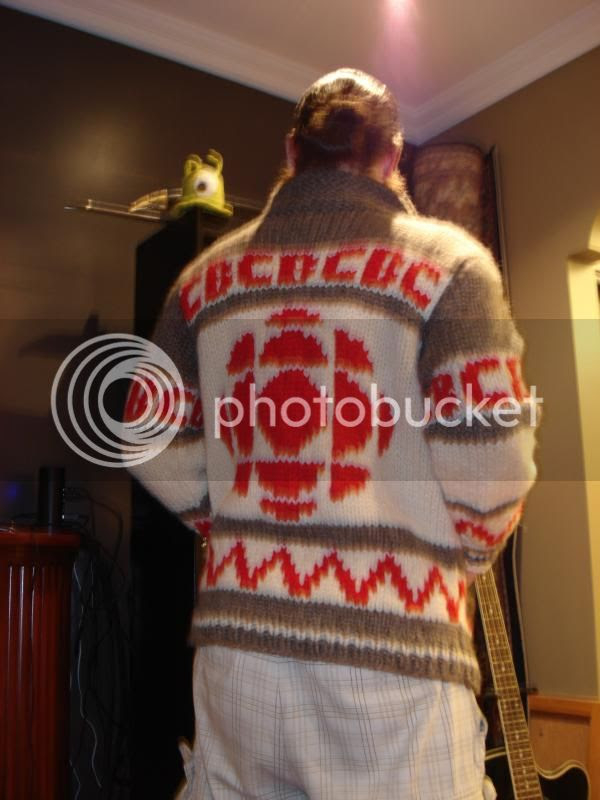 Heck, maybe if he plays his cards right, he might get one too!