The big thing in Physics news lately has been the results from the OPERA experiment which showed that these sub-atomic particles called neutrinos were travelling slightly faster than photons, the massless particles that light is made of, would have. This result is especially interesting because according to Einstein's theory of Relativity, nothing is supposed to be able to travel faster than the speed of light. You can read about these results all over the internet (here and here, for example), but the basic idea is that scientists at CERN shot some very high-energy neutrinos through the Alps and into a detector, which measures how long it took them to get there. What was found was that the neutrinos reached the detector 60 nanoseconds faster than they would have if they were traveling at the speed of light.

It might be useful to talk a bit about what neutrinos actually are. These weakly-interacting, neutral elementary particles were first proposed to exist by Wolfgang Pauli in the 1930s to help conserve energy and momentum in a process called beta decay, but weren't detected until 1956 in an experiment using beta-capture, where an anti-neutrino and proton combine to make a neutron and positron. Nowadays, we routinely detect neutrinos coming from the sun and from distant supernova explosions. This little particle was central to a scientific conundrum called the "Solar Neutrino Problem" where only about a third of the number of neutrinos expected to be coming from the sun were detected. This was solved by the discovery that neutrinos have mass (though a very small one), and come in three different types which they can oscillate between at random. The layout of the OPERA experiment.
Since neutrinos are supposed to have mass, the results from the OPERA experiment are mildly disturbing. Relativity is founded on the principle that objects with mass cannot travel at the speed of light, much less faster than it, and if neutrinos can, in fact, travel faster than the speed of light, then we would have to seriously change all our ideas about spacetime and gravity. Fortunately, this is a very preliminary result, and there is a good chance that it's wrong. Not that the scientists performing the experiment were bad at their job or anything, but there are many sources of error that might pop up. As someone once said, "Extraordinary claims require extraordinary evidence." That means that physicists probably aren't going to take these results seriously until another experiment can verify them.

I'll certainly be keeping an eye on it... already there are a flurry of papers on the arXiv attempting to explain the OPERA results. If you want to read the original paper, check it out here.
Posted by Unknown on 9/30/2011 02:15:00 PM 0 comments

Beards are the next big thing. Seriously, have you seen this shirt? The boyfriend actually has one so large he can hide small children in it (he was at "professorly" last time I checked). Believe me, I have serious beard envy. So, it only makes sense that The Happy Seamstress should design a pattern of one for those of us who aren't capable of growing our own. If you want to be a beardo, just like me, go check out The Happy Seamstress Beard Knitting Pattern.

It only made sense, of course, for me to take multiple silly pictures of myself wearing a beard. This one makes me look like Jesus: 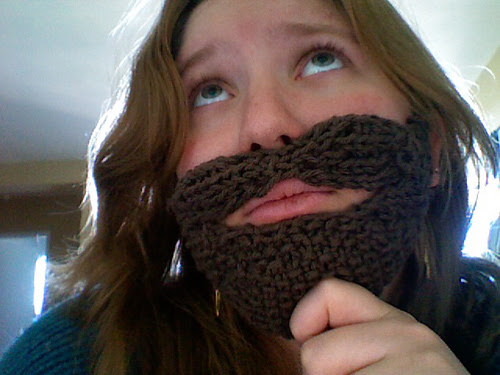 And this one like a... well, I'm not quite sure, but aviators look pretty neat with a beard: 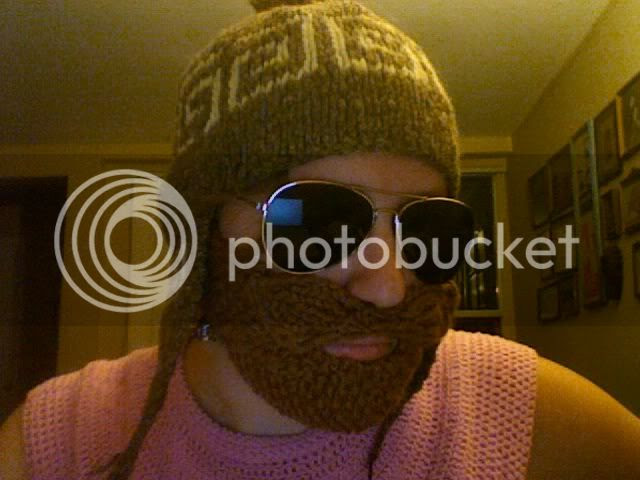 And here I look like a trucker with a, well, um, a fascinator? And cleavage?

If you want to see more pictures of weirdos in beardos, check out this blog post.

Fun things from the INTERNET!

I love cake, and I love crafts, and when the two come together in a perfect sugary package, well, I just can't resist sharing the awesomeness with the rest of the world. If someone gave me this cake for my birthday, I think I'd probably fall in love with them instantly:

This one would be ok too:


As for other cool internetty things, one of my favourite all-time crafters, Debbie Stoller has posted some really cool and well-done knitting videos. The first one teaches the absolute beginner how to cast on and start knitting, and the other two talk about lace, one explaining the yarnover and the other how to do decreases.

If you want to get a detailed review, I wrote one over on the Happy Seamstress, and in the meantime, here's a screenshot to whet your appetite (I love that orange background!):

Astronomy Monday: Diamonds in the Sky

Happy Labour Day, everyone! I thought I'd start off the week with some cool science because it's been a while since I've rambled on about astronomy here...

A couple of weeks ago, scientists announced that they had discovered a new millisecond pulsar with what is most likely the degenerate core of a star orbiting it. Since this newly discovered planet-like object probably has a mass close to Jupiter's but a radius closer to that of the Earth, it is extremely dense, and since it is most likely composed primarily of carbon, it would have a crystalline structure. In the media, of course, this is being announced with the sensational headline "Diamond planet found!" 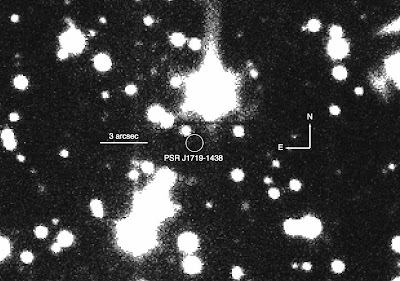 The pulsar around which this planet is orbiting is called PSR J1719-1438, and it is a neutron star with a rotational period of 5.7 milliseconds. It's located in the constellation Serpens and is 4000 light years from us. A neutron star, of course, is the compact object that remains after a massive star goes supernova. As you might have guessed from their name, neutron stars are composed almost entirely of neutrons since the gravitational force of these objects have on themselves is stronger than the force keeping electrons and protons as separate particles (also called electron degeneracy pressure).

Neutron stars are often called "pulsars" because they emit regular bursts of light in the radio part of the spectrum. Since neutron stars used to be very large objects and were compressed into a small volume, they spin very quickly (hence "millisecond" pulsar) and have extremely large magnetic fields. Like supercharged northern lights, charged particles would be drawn in by the magnetic field and emit light as they speed up towards the magnetic poles (though this happens because of the interaction of these charged particles with our atmosphere on Earth). Just like with the Earth, the magnetic poles and axis of rotation aren't lined up, so as the neutron star rotates, the flash of light caused by these accelerating charged particles twirls around like a lighthouse. This is best shown in a diagram (stolen from the ATNF Pulsar Education page):

The interesting part about the PSR J1719-1438 system is that the "planet", which is called PSR J1719-1438b, is in fact believed to be the core of a dead star, which is certainly not how we usually think about planets being formed. Planets like those in our solar system were formed about the same time as the sun. The big cloud of gas out of which our sun was formed collapsed into a disk, and out of this disk gradually clumped together what would become the planets in our solar system. It would have looked something like this (from Astronomy Online): 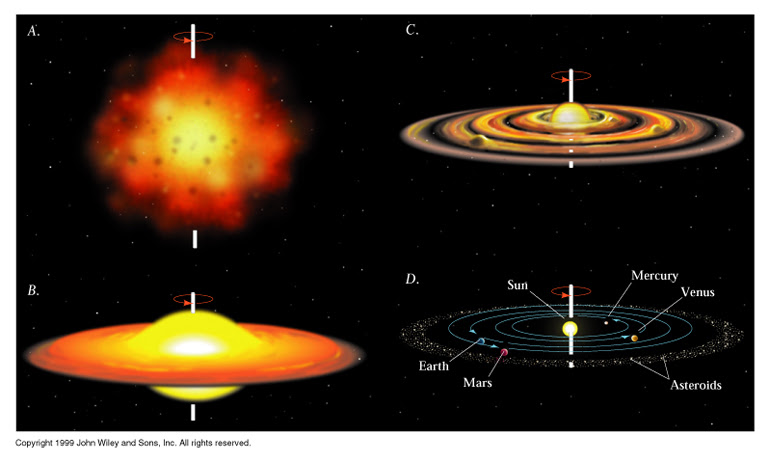 What scientists think happened in this case, however, is that the PSR J1719-1438 system was originally a binary star system with one star large enough to go supernova and the other less massive. Because it would have burned through it's fuel more quickly, the more massive star would have died first and gone supernova, turning into the neutron star. The smaller star would have burned through its stellar fuel more slowly and as it started to turn into a red giant, its outer layers expanding as it finished burning hydrogen into helium and progressed to burning helium into carbon, the neutron star would start stripping material off its companion. The outer layers of hydrogen and helium would be torn away leaving only the dense core of carbon. In a slightly different situation, the smaller star might have been completely destroyed by the neutron star, but in this case, the tiny core was just far away enough (at 600,000 km, roughly the distance between the Earth and the Moon) and compact enough that it was able to survive.

Though this is a very exciting discovery, I have some, probably unfounded, issues with calling this object a planet. The official IAU definition of a planet is as follows:


"A "planet" is a celestial body that: (a) is in orbit around the Sun, (b) has sufficient mass for its self-gravity to overcome rigid body forces so that it assumes a hydrostatic equilibrium (nearly round) shape, and (c) has cleared the neighbourhood around its orbit.

Though all these criteria are probably true for PSR J1719-1438b, it seems strange to call something a planet which used to be a star.

At any rate, this is very cool science and I'm looking forward to seeing if more systems like this are discovered!
Posted by Unknown on 9/05/2011 06:00:00 PM 0 comments

I must admit it, I LOVE making toys, whether knitted or crocheted. There's just something wonderful about creating something absolutely adorable and seeing the personality of the toy grow under your fingertips. I don't even mind all the annoying sewing up bits so much. I also enjoy patterns that have a very clever construction, which is why I just HAD to make this adorable little toy.

Look! It's a bunny (though my grandma would argue that it looks more like a dog)! 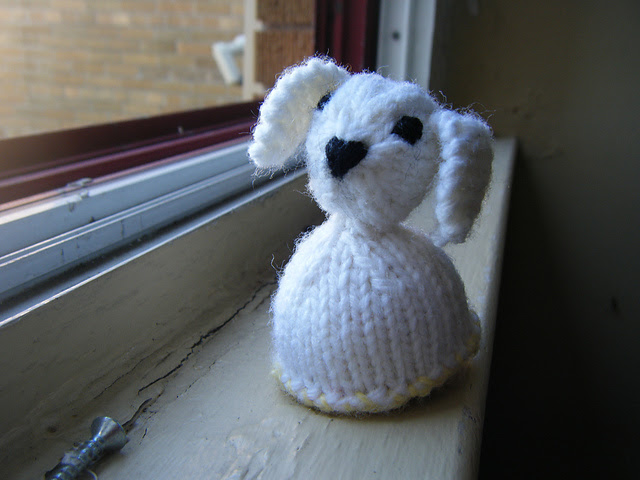 However, just flip it around... 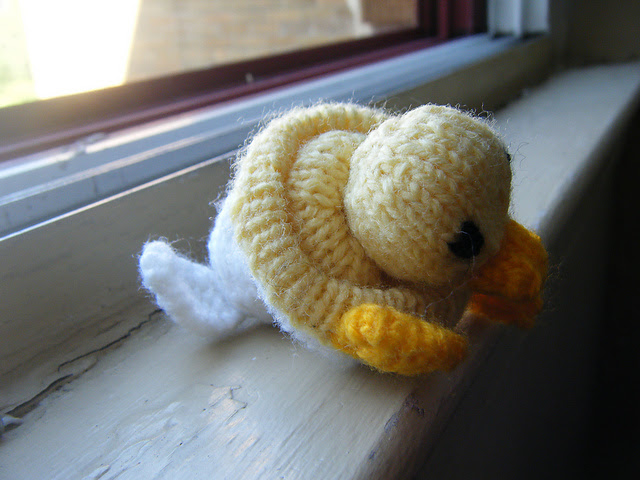 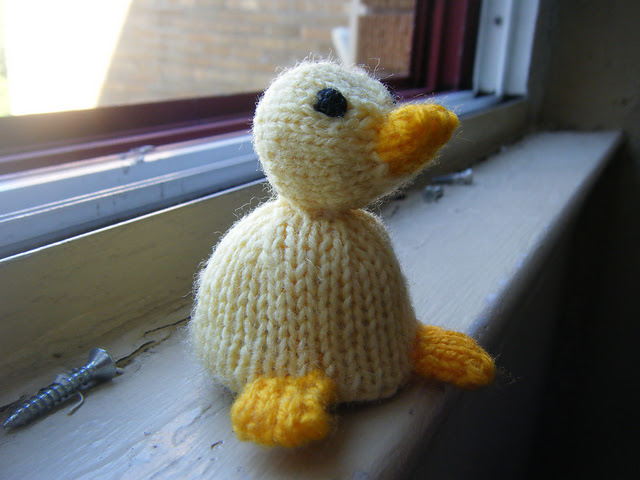 I actually made two of these little guys... one for my adorable 11-month-old cousin and another for my friend's baby. They both really liked their duck-bunnies, at least, that's how I'll interpret their promptly putting the toys in their mouths. I have a feeling their parents appreciated the cleverness of the pattern more than they did, but hopefully these toys will last long enough that the kids will be able to appreciate them for their construction.

The pattern is the Mini-Reversible Duck to Bunny by Susan B. Anderson. The original design was a little larger than what I ended up with, but I had a finer yarn and so used smaller needles. I used up some scrap acrylic yarn, some of which was from my maternal grandmother's stash, and embroidered the eyes to guard against little gnawing teeth. The heads are stuffed with cotton balls because that's what I had.