And no, I didn't time travel... I recently spent a few days in Victoria, BC to hear the premiere of my daddy's opera, Mary's Wedding. It was certainly a great success, and I don't think there was a dry eye in the audience. I bawled my eyes out during almost the entire second act... Anyway, while I was there, I managed to do a bit of sightseeing, and yes, of course, visit some of Victoria's wonderful yarn shops! 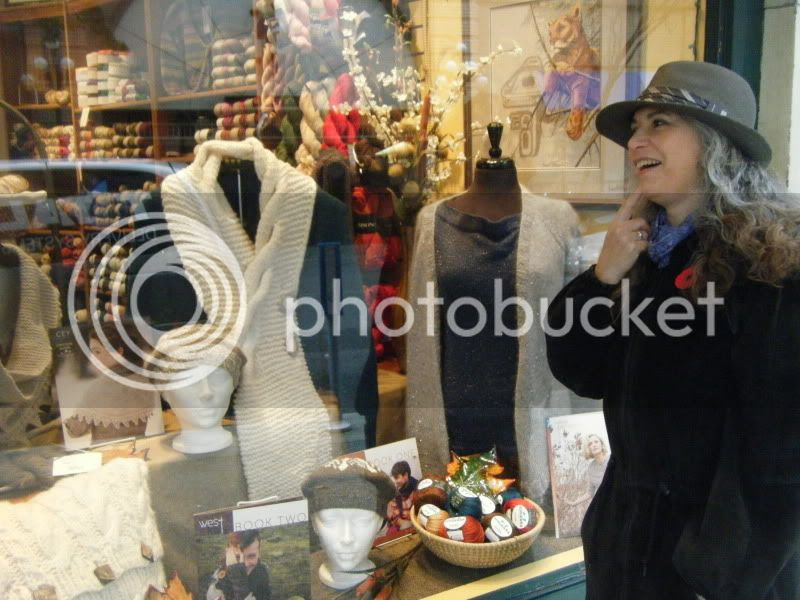 I know my priorities, so I'd like to first mention that Victoria's yarn shops are all wonderful. There are three in the downtown core (and they were within a 15-minute walk of our hotel!): the Button and Needlework Boutique (whose display my mom can be seen drooling over in the above picture), Knotty by Nature, and the Beehive Wool Shop. Our first stop, the Button and Needlework Boutique was extremely nice, and the ladies there were very very friendly. Also, they had a WALL OF BUTTONS! Mom and I were impressed... 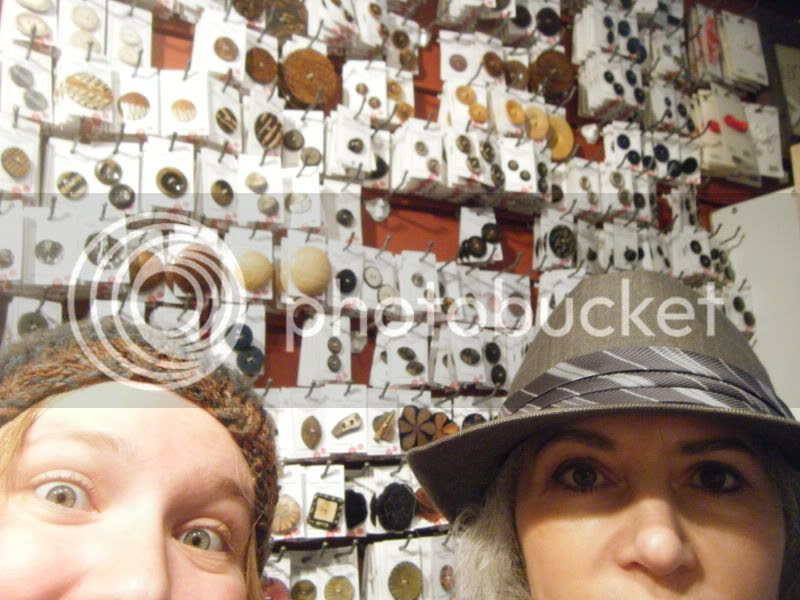 I picked up a skein of a very lovely silk mohair blend called Shibui Knits Silk Cloud (a very apt name, let me tell you) in the wasabi colourway that I just couldn't stop petting... 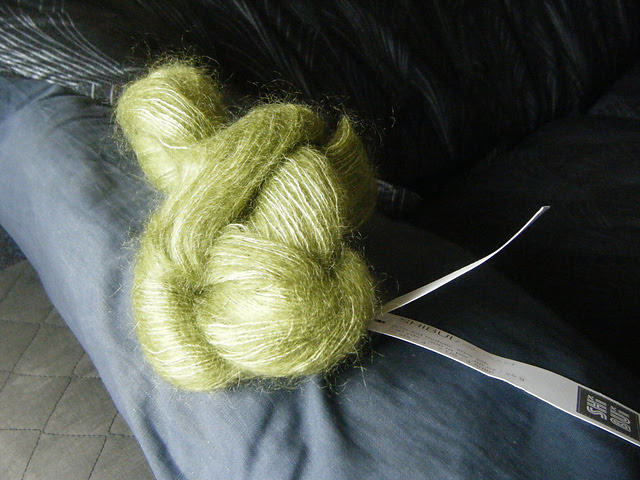 The next day, we went to Knotty by Nature, which was even more fabulous, if that's possible, and certainly my favourite crafty stop on the trip. Most of the stuff in the store was local hand-dyed and hand-spun yarns, and they also had more roving than I've ever seen in one place. I seriously wanted to buy all of it. The nice fellow who worked there also offered to show us how he uses his drum carder to make amazing fibre blends... I totally need a drum carder now. The finished product totally looked like some sea god's beard, but it was so sparkly and soft and amazing... 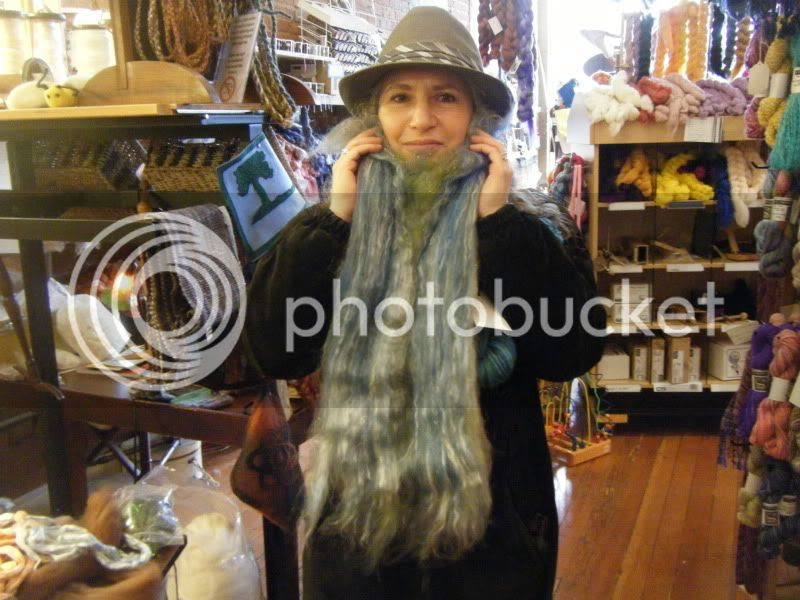 I couldn't resist buying a little bundle of blended fibre from them. 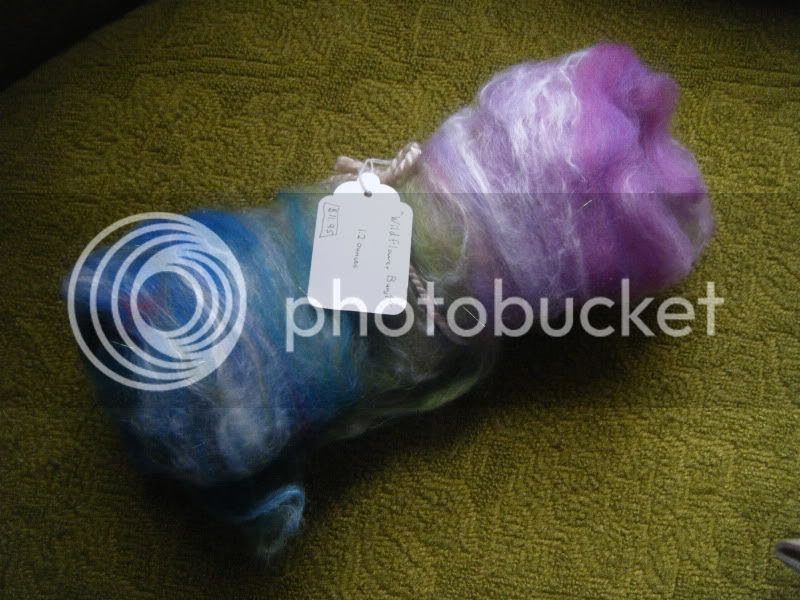 The third and final yarn store we visited was the Beehive Wool Shop. It was very nice as well, though after the last two, it seemed kind of ordinary. They had a good selection of very nice yarns, but weren't any more special than any yarn store I could have gone to in Toronto. Even so, I managed to walk away with some very nice sock yarn (Diamond Yarn Luxury Collection Soxy) that was being sold at a very reasonable price. I know, I'm weak... 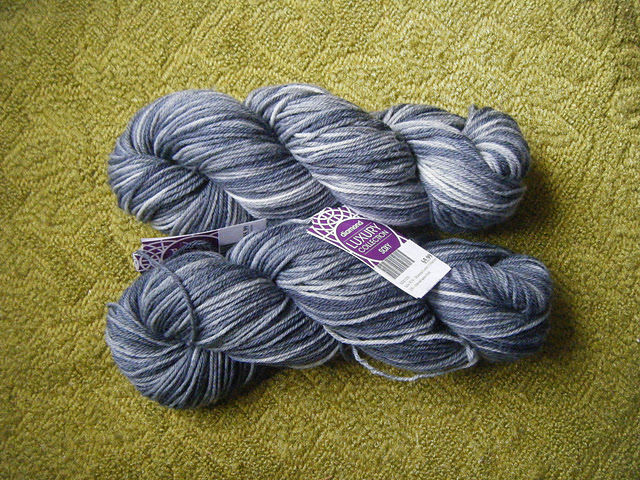 Besides indulging in all that yarny goodness, we saw a whole lot of Cowichan sweaters... 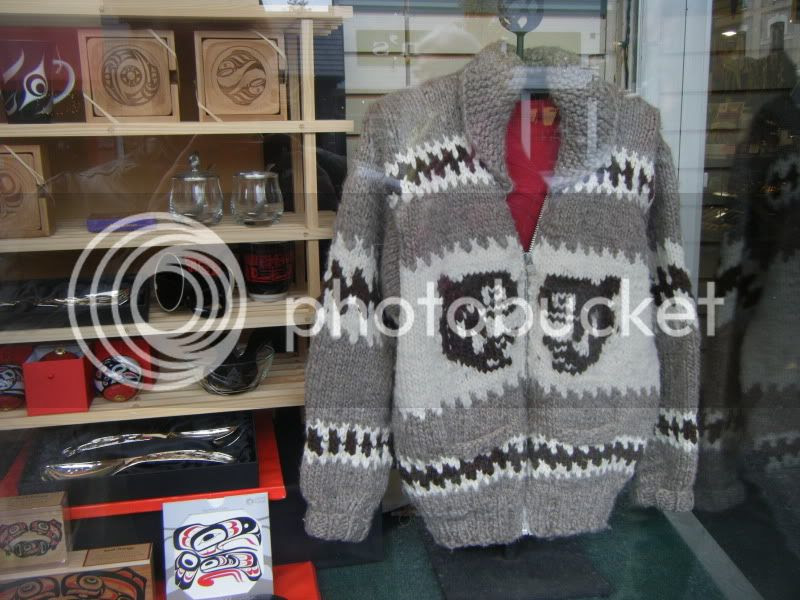 Had tea and biscuits at the Murchie's Tea store... 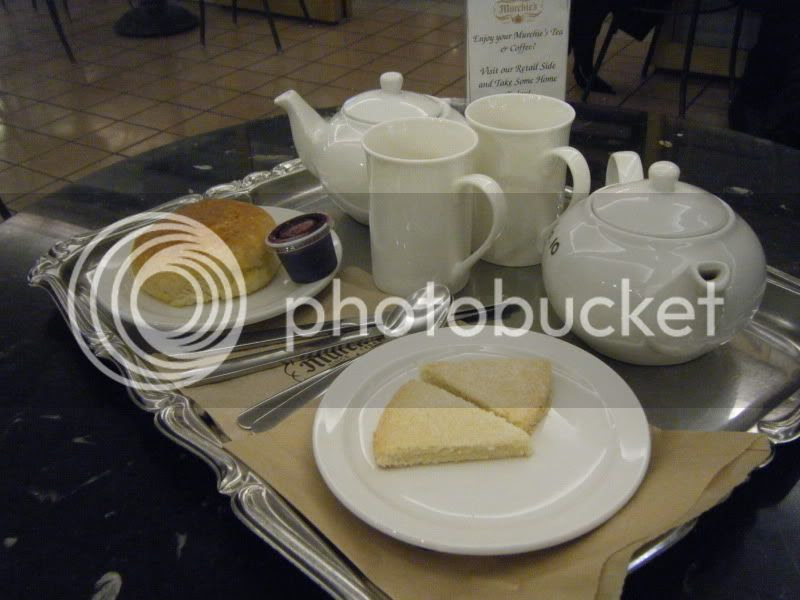 Gazed upon the beauty of the Victorian harbour... 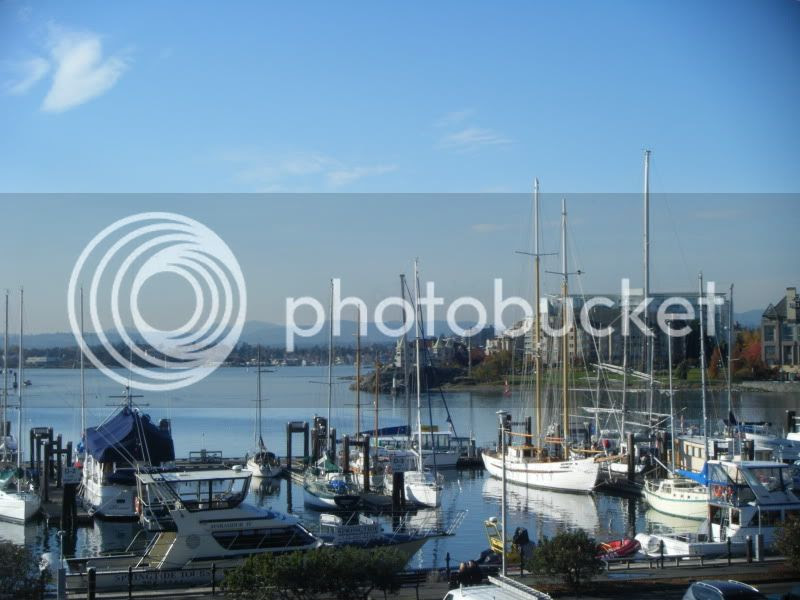 And enjoyed some very good food, including this beautiful pumpkin spice latte... 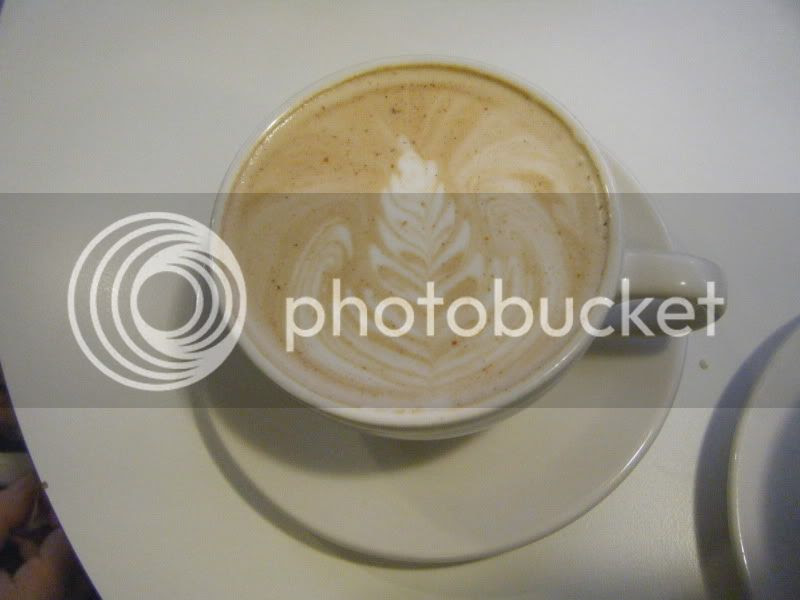 No FO left behind...

I'm currently in Victoria, B.C. for the premiere of my Dad's opera. I'll certainly write about the amazing time I'm having here when I get back home, but I felt like writing an entry right now... And then I realized that I have a bunch of finished objects that I never got around to writing about! So here goes... 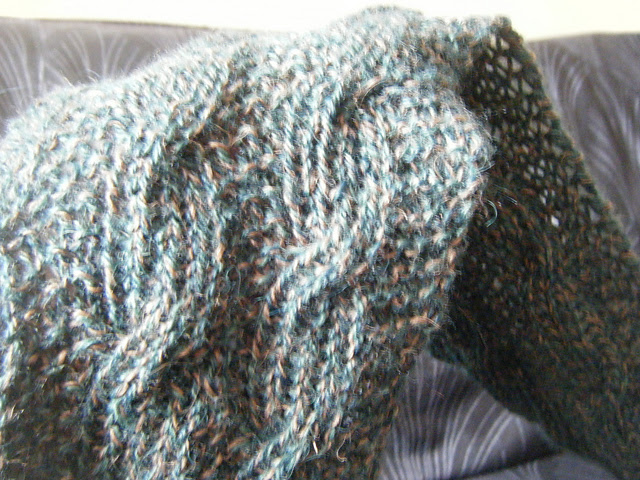 The first on the list is this Swelligant Scarf (from Son of Stitch 'n Bitch) for my brother because he wanted to have a fancy scarf. I think I never posted about it because I was waiting to get some pictures of it on him, and that never actually happened. So, I apologize for the crummy picture. I used an acrylic/alpaca blend in a fingering weight, which might have been a little fine for this pattern, but it still turned out nicely. The pattern features a reversible cable, which is really neat, and so I'll likely make this pattern again in a heavier yarn (my mom is already on her second). 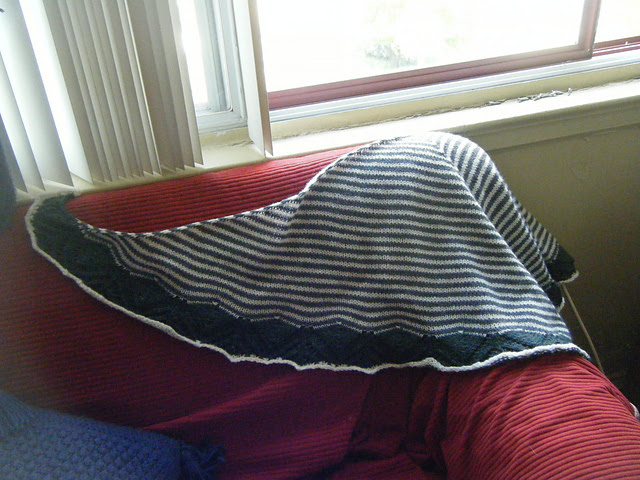 The second is my stripy shawl, which I made for the boyfriend's cousin's wedding, and never wrote about because I was waiting for pictures from other people of me wearing the shawl at said wedding and those pictures never materialized. I used the Dream Stripes pattern by Cailliau Berangere. It was originally written in French, and so the translation isn't amazing, but I was able to figure it out (and knowing how to speak french was a bonus). I used leftover yarn from my dad's Guitar Socks and the leftovers from my brother's scarf. 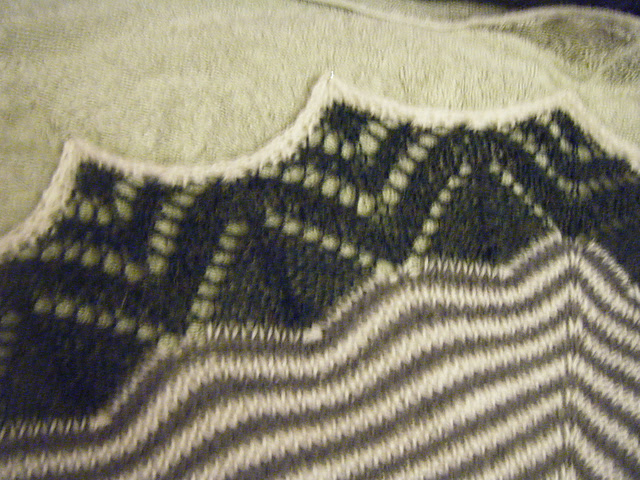 As you might have noticed, I kept running out of yarn, and so I probably redid the edging three or four times. I started off making it grey, but I didn't have enough yarn for that, and then I tried the white, but that didn't pan out either... And then I did the green, and I had enough yarn for all but the last two rows and the bind-off. I think it probably turned out ok regardless, and I wear this shawl all the time as a scarf. It's super cozy. 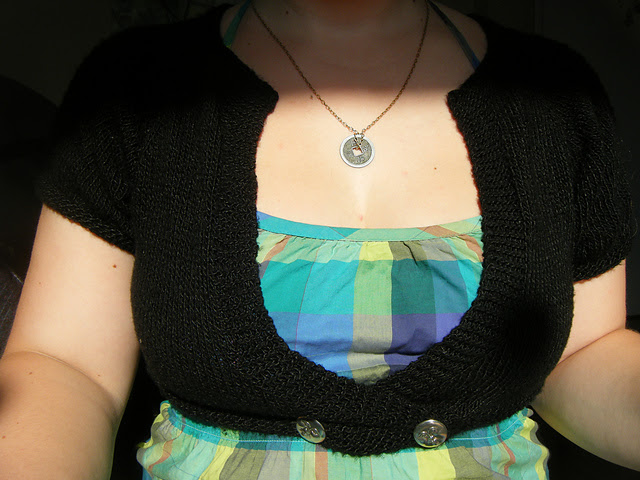 Next we have what I like to call my Boobie Cozy, though it's really just a cute little shrug. The pattern is the Minisweater by Stefanie Japel and I used four skeins of Debbie Bliss Pure Silk that were gifted to me by a friend. It was a dream to work with, but since that yarn was much thinner than the pattern called for, I had to do a few modifications. However, since it's essentially just a top-down raglan, it was pretty easy to figure out. 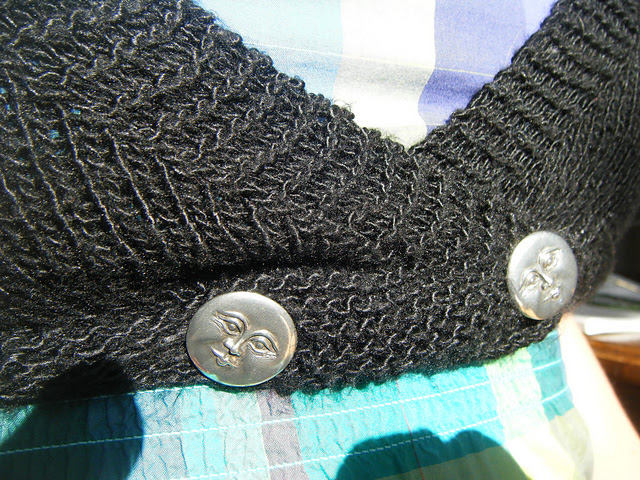 My favourite part is totally those moon-face buttons, though figuring out how to properly place them was a pain in the ass. I ended up making the first button-hole in the wrong place, and had to sew it up and do an afterthought button-hole. Unfortunately, the silk seems to have stretched a bit as well, so it's a little looser now than it was, but I still love it. 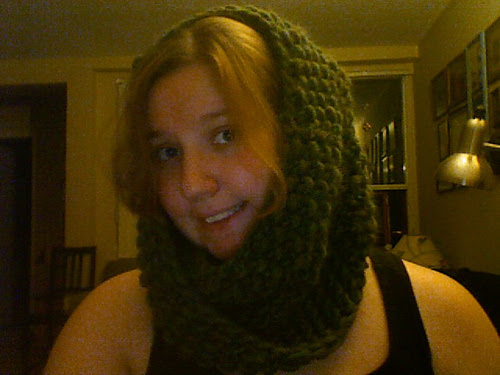 Finally, we have this super thick and awesome cowl, which I never posted about because I didn't bother to take nice pictures. I used the Marian pattern (only on Ravelry) by Jane Richmond and a skein of Cascade Magnum. I didn't have any 15mm circular needles, so I ended up knitting it flat and seaming it, which turned out just fine. I absolutely love how fast it worked up (only 2 days of on and off knitting), and how squishy the finished product is. I should knit with big yarn and big needles more often...

As my second hammered wire jewelry project, I decided to make Joanna a necklace for her birthday. 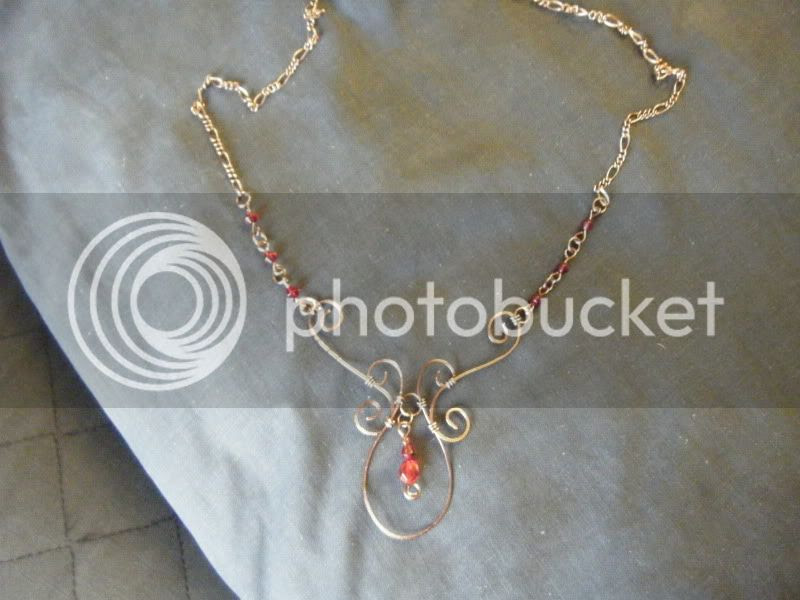 The chain and magnetic clasp (not pictured) were bought at Madame Pickwick, a favourite craft store in my home town of Sherbrooke, QC, and the beads are from my very aged stash. Everything else, including the jump rings and eye pins, was fashioned from copper wire that I bought at Planet Bead in Milwaukee, WI. Here's an in-progress shot: 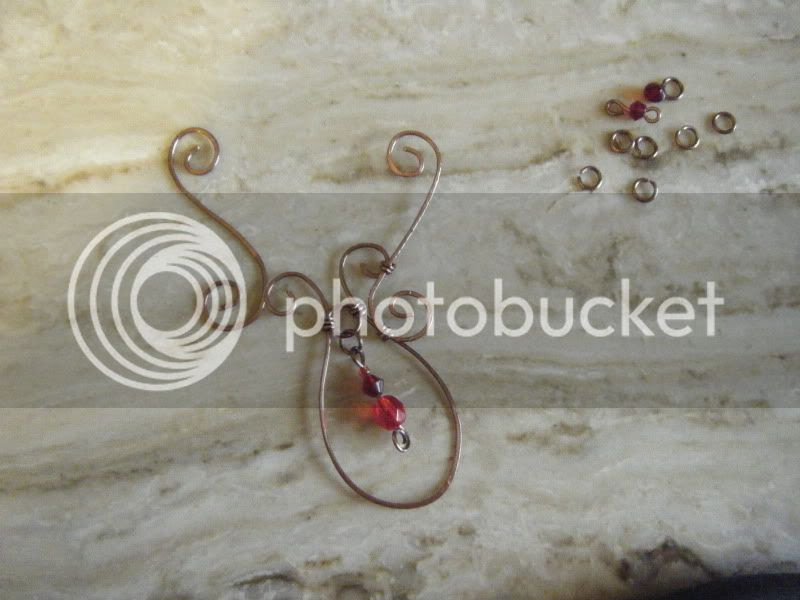 And just in case anyone is interested, this is what my workstation looks like when I'm playing with wire: 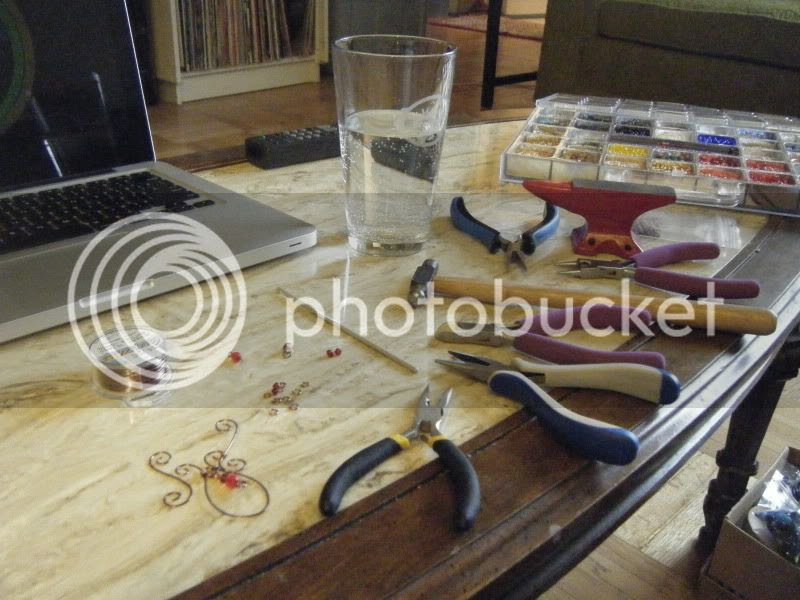 All in all, I think Joanna liked her necklace. Here she is, showing it off on the special day: 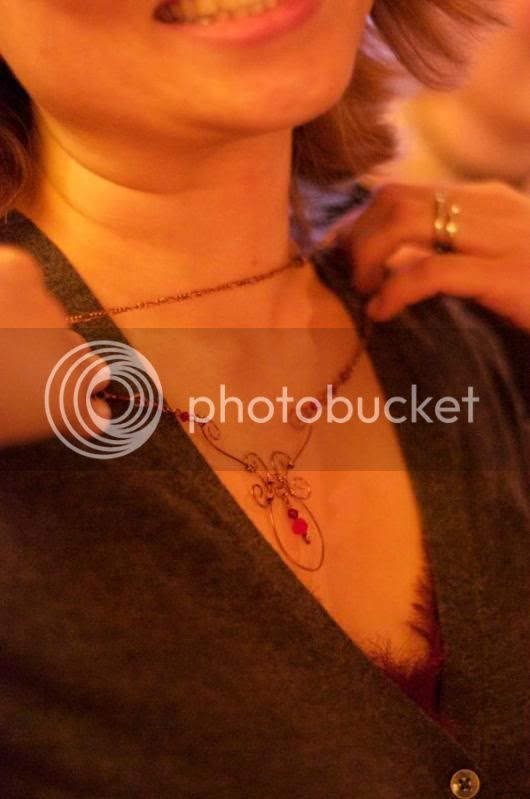