Ripples in Space-time from the Beginning of the Universe

The big news all over my Facebook feed (because obviously that's how I get news) Monday morning was all about what might possibly be one of the biggest discoveries about the Big Bang since the Cosmic Microwave Background (CMB), the faint glow of light left over from the Big Bang, was inadvertently discovered by Penzias and Wilson in 1964. The Southern Pole microwave telescope BICEP2, which stands for Background Imaging of Cosmic Extragalactic Polarization 2, measured a small signal in the CMB providing the first evidence for Cosmic Inflation. 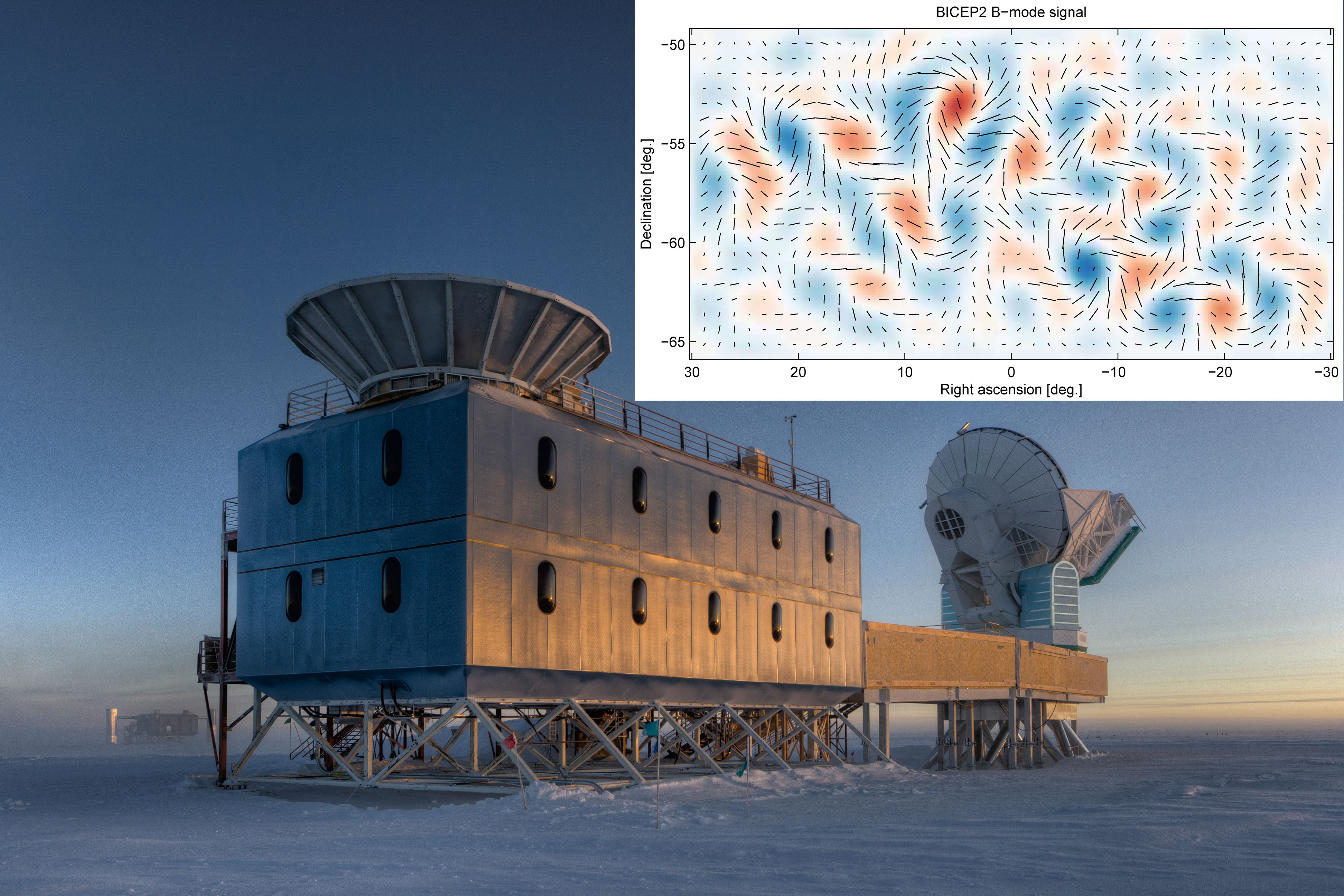 Image Credit: BICEP2 Collaboration, NSF, Steffen Richter (Harvard)
Inflation was a theory first introduced by Alan Guth in 1980 that was designed to explain why the Universe appeared so uniform in all directions. Without Inflation, because widely-separated regions would have been moving away from each other faster than the speed of light, and so were not yet in causal contact, the Universe would not have had enough time to reach the temperature equilibrium we see evidence of in the CMB today. The solution was to have a period of rapid expansion in the first few fractions of a second after the Big Bang. Thus, a small region of space which was able to reach an equilibrium expanded extremely quickly to become an enormous volume that wasn't causally connected anymore, but that had achieved uniformity. The slight differences in temperature which we observe in the CMB would therefore have originated as quantum fluctuations magnified by the inflationary process. 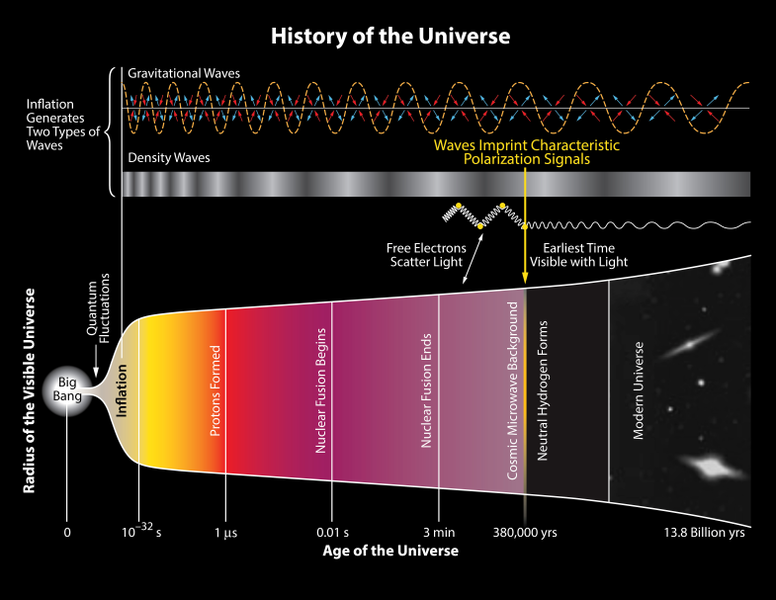 Image Credit: BICEP2 Collaboration, NSF
Although Inflation solves the problem of the uniformity of the Universe, until recently it had no observational evidence to back it up. BICEP2 was able to provide this evidence in the form of tiny twisting fluctuations in the polarization of the CMB, that is, the preference of light to vibrate in one direction over the other, called B-Modes (see the top-right corner of the first image in this post). This polarization signal, which appear as faint spiral patterns on the CMB, is a result of ripples in space-time, called gravitational waves, created in the earliest moments of the Universe. Gravitational waves cause space itself to get squeezed and pulled apart very slightly, and this would manifest itself by twisting the polarization of the light coming from the Big Bang.

With an amazing discovery like this, it's tempting to make grand proclamations about how we now know how the Universe began, but unfortunately, we still don't understand the mechanism which caused Inflation. On top of this, only one team has made measurements of these B-Modes in the CMB, and it is wise to wait for confirmation from other experiments before getting too excited. One such experiment is called Spider, a balloon-borne experiment lead by Barth Netterfield at the University of Toronto in collaboration with teams from Caltech, Princeton, Stanford, and others. It was meant to fly this past December in Antarctica and make its own measurements of the CMB polarization, but because of issues at NASA, the experiment is delayed until next winter. Hopefully, it will then be able to confirm the results obtained by BICEP2.

Image Credit: Spider Collaboration, B.P. Crill et al.
You can learn more about this recent discovery by checking out these articles by the New York Times (with an excellent infographic about Inflation), Scientific American, and Space Ref, or by reading the original release from the BICEP2 team.
Posted by Unknown on 3/19/2014 08:55:00 AM 0 comments